How to use/be an airborne relay

There are some cases where a pilot may not be able to reach ATC directly due to lack of power or being below the radio horizon:

What is the proper process and phraseology to request an airborne relay via an aircraft that can hear both you and ATC?

Likewise, what is the proper process and phraseology to provide such a relay?

From the other side of the mic, there is no set phraseology for this situation. The closest thing I can find is in Section 4, IFR, of the 7110.65:

Besides that, the general "exercise best judgement" provision of 1–1–1 applies and I would use plain language. In my experience, this often sounds like:

I don't believe there is standard phraseology provided for pilots in this situation either; a quick search of the AIM didn't show anything useful.

As you can see from my example, in order to be an airborne relay, the best thing is to relate what was said as close to verbatim as you can. Tossing in an "ATC advises" at the front of transmission won't hurt.

In order to request an airborne relay, I would guess it's probably best to start with request for a radio check, whether on your last assigned ATC frequency or on 121.5:

I don't know if anything I did was proper, but I did just this sort of thing when I was bush flying in a Cessna 180 on floats in Northern Ontario in the early 1990s, and was forced down by a rough running engine (that had a failing cylinder) on an uninhabited lake, with two customers on board (I was bringing out two lawyers(!), on a fishing trip, from a remote cabin about 5 miles away from my landing spot). In my case it was to relay a message to my base, because although I was 80 miles from civilization, things weren't serious, yet.

It was a nice sunny May morning. It wasn't quite an emergency and my main goal was to contact my base to come pick us up, not trigger a formal official rescue operation. The lake I landed on was part of the same outfitter's camp network, and there was a very convenient dock, from which a trail led to another lake, with a couple of the outfitter's fishing boats ready for use.

So, I sent my passengers (who seemed to be amused by the whole situation) fishing while I tried to raise passing airplanes I could hear in the distance on unicom 122.8 and on 126.7. But no joy. Now what to do... set off the ELT? Then I noticed a contrail overhead and thought "I wonder..." knowing that airlines routinely monitor guard when over sparsely settled areas.

I broadcast a PAN PAN PAN call, with my registration, on guard, 121.5. To my amazement, after a few tries a Canadian Airlines flight, the contrail above me, responded and offered help. I was able to have them contact my base on the unicom frequency and advise my location, that all were well, and that we needed rescue due to mechanical problems, before the Cessna's meagre comm radio transmitter faded out for the airliner. I could listen to the airliner talking to base on 122.8 on the airplane's other comm and knew that help was on the way (the air service manager was suspicious it was some kind of practical joke initially).

My boss showed up with the Beaver about 5 hours later to fly us out, and I went back in the next day to help the air service's mechanic remove the engine and fly it out for overhaul.

I took the pic below while preparing a bipod from pine poles to lift the engine, using a come-along. The mechanic is sitting in a boat we set across the floats so he could work. The Beaver showed up late in the afternoon and we manhandled the O-470 into the Beaver by dragging it up poles into the cabin door using the come-along. We flew the rebuilt engine back in about 2 weeks later and reinstalled it, and I flew it the rest of the season. 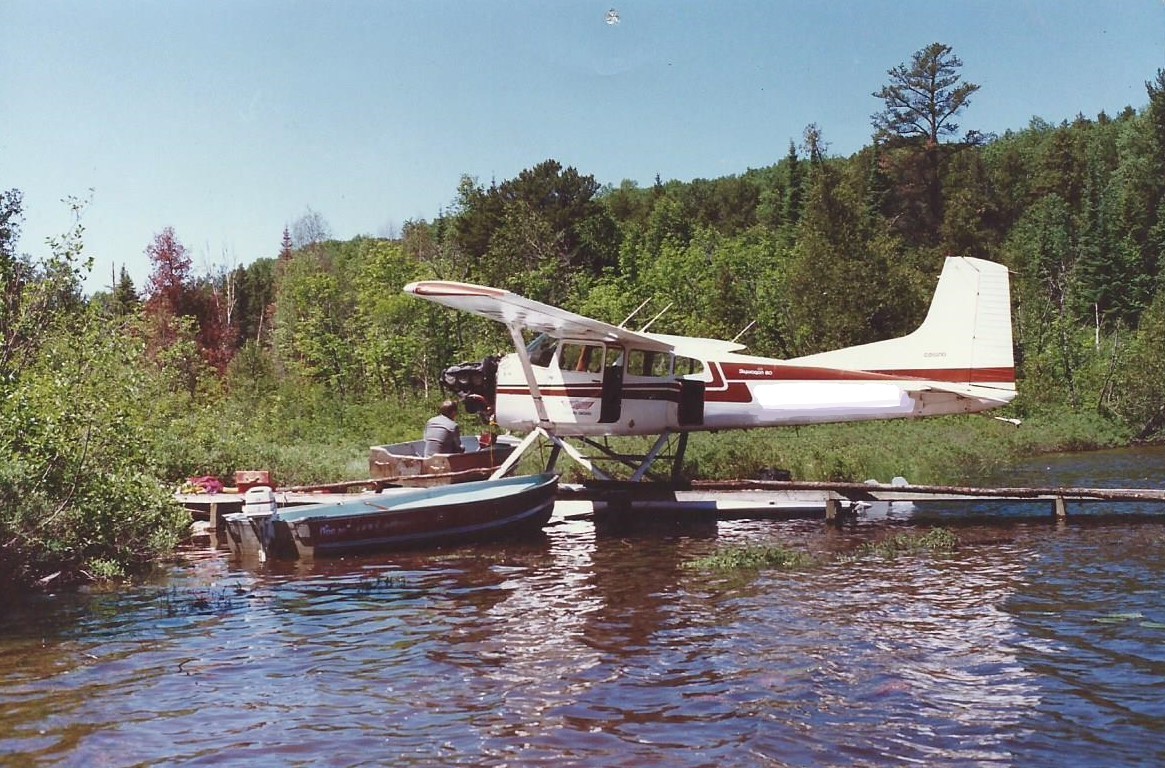 This is an exchange summarizing what I’ve seen in videos, but I don’t have a source to prove that it is correct (if any such source even exists):

Note that this assumes all three are using the same frequency, so Podunk should be able to hear ABC678 and copy their readback. If they were on different frequencies for some reason (or if Podunk missed part of the message), the relay would have to repeat it.

11
How do pilots/controllers deal with overlapping transmissions on the radio?
27
When should a pilot use the word "takeoff?"
21
How is the ATC language structured?
19
When do pilots actually use ‘wilco’?
3
How to relay an emergency to ATC while on the ground?
5
What is the process for requesting flight following in Canada?
3
Why can’t air traffic control radars determine the altitudes of primary targets?
17
How do I know how to describe my position on the airport when I contact ATC?