What would be an easily understood explanation of a "Great Circle Route" for young Civil Air Patrol cadets who are being introduced to aviation and navigation principles for the first time?

I would recommend that you don't introduce the term first and then try to explain it verbally, but demonstrate it in an interactive, hands-on practical way instead.

Bring a globe, a flat map, and a piece of string to your next meeting. Have the cadets pick a departure and destination city pair. New York to Tokyo might be a good choice, because the effect will be more dramatic over a long distance in the Northern latitudes.

Then have two of them stretch a piece of string in a straight line between those points indicating the shortest distance. Make sure they agree that the string represents a direct line across the surface of the globe.

Then, keeping tension on the string, locate some specific geographical features or cities that the string crosses. Have another small group of cadets find these features on the flat map, and mark them with an "X". The more checkpoints the better.

Once you have as many marks on the flat paper map as possible, simply ask them to connect the dots with a pencil. Don't tell them what to expect, and they will see for themselves immediately that a direct path on the globe equals a curved path on the map, no explanation needed. Let this sink in, THEN you can tell them that the phenomenon is what the term "Great Circle" refers to.

This revelation should open the door to a good discussion and explanation on the challenges inherent in projecting a curved surface onto a flat one, and you can show how landmasses are distorted as a result. Especially the infamous Mercator projection, with its HUGE depiction of Greenland.

I added a short explanation about why the shortest route is curved on usual planar maps, albeit this is not part of your question.

Finding the shortest route between New-York and Murmansk?

This circle which has earth center for center is named a great circle. Other circles drawn on earth are small circles. What we have shown is the shortest route between two points is a portion of great circle. Also visible is that a great circle cut all meridians at different angles, and therefore flying a great circle requires constant heading changes.

Now you'll likely need to explain why the great circle appears curved on a flat representation of this sphere in usual projections (e.g. Mercator). A well known great circle is the day-night line:

The night shade line is a great circle

This distortion appears in projections which try to preserve either lengths (equidistant projections) or shapes (conformal projections).

Below is a comparison for the great circle between New-York and Murmansk:

Explaining why projections can change the shape of the path is difficult without entering into the mysteries of geodesy and how it is impossible to preserve at the same time lengths, areas and angles. A map is designed using the projection which is the most useful for a given use.

However you may remind your cadets that this problem is also visible when shooting a photo, all parallel lines converge to the vanishing point else they don't look real (comparison between regular and isometric perspective).

I would do it in a similar way Michael Hall suggested it in his answer.

However, I would first bring two different Maps (e.g. Mercator and Gall-Peters) and ask the flight students a question about the "straight" route between two airports that lead to different answers when using the two maps.

Example: "Does the 'straight' route from Seatle to Hammerfest cross Greenland or Iceland?"

The students will draw a straight line on the two maps and get different information: 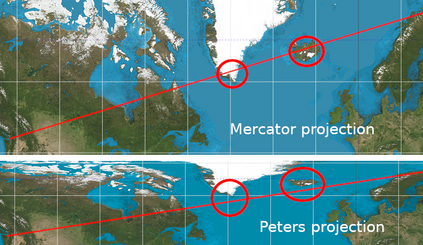 Now I would ask them why they got different information. (The answer should be: Because the spherical earth cannot be drawn on a flat map.)

If they are clever, they will have the idea to use the piece of string on a globe themselves now ...

Then you can explain them that the route you get with the piece of string is the "Great Circle Route".

Not the answer you're looking for? Browse other questions tagged flight-training navigation aeronautical-charts or ask your own question.

7
Why don't most planes fly in a straight path?
11
Can a great circle be drawn between any two points on Earth?

38
How do young pilots in the USA accumulate 1500-hours to become a first officer?
15
What precautions should be taken when flying near the magnetic poles?
4
When should a PPL student start learning navigation?
0
What's is the difference among ECL, CFL, RFL, TFL messages in ATM?
3
What is the accuracy of distance and position calculation?
10
Why might this trans-pacific flight not follow a more direct route?
5
Can longer paths consume less fuel than the (shorter) great circle path?
2
Compute great-circle track from longitude
4
What is a rhumb line?