How does HSI decide to give a left or right CDI indication?

Since there is no reverse sensing in HSI, it tells you to turn left or right, So Is the interpretation correct that it will tell you to turn to the direction to that direction, which requires less turning - to intercept that radial.?

For example, Our present radial is 070 degrees, course selected is 90 degrees ,

So if if the heading is 355 degrees, would it tell to turn left since it requires less turning ?

Good question. But first understand that an HSI (Horizontal Situation Indicator) will not tell or direct you to turn in any direction. You have to decide what direction (left or right) to turn to best achieve your needs. There are other instruments, such as a Flight Director, as part of an integrated navigation system that can direct/command a turning direction.

If so, as some HSI tutorials use for positional awareness training, the most direct/shortest distance to the 090 radial would be turning to intercept it (the 090 radial) from a perpendicular course/heading (heading 180 degrees in your example). 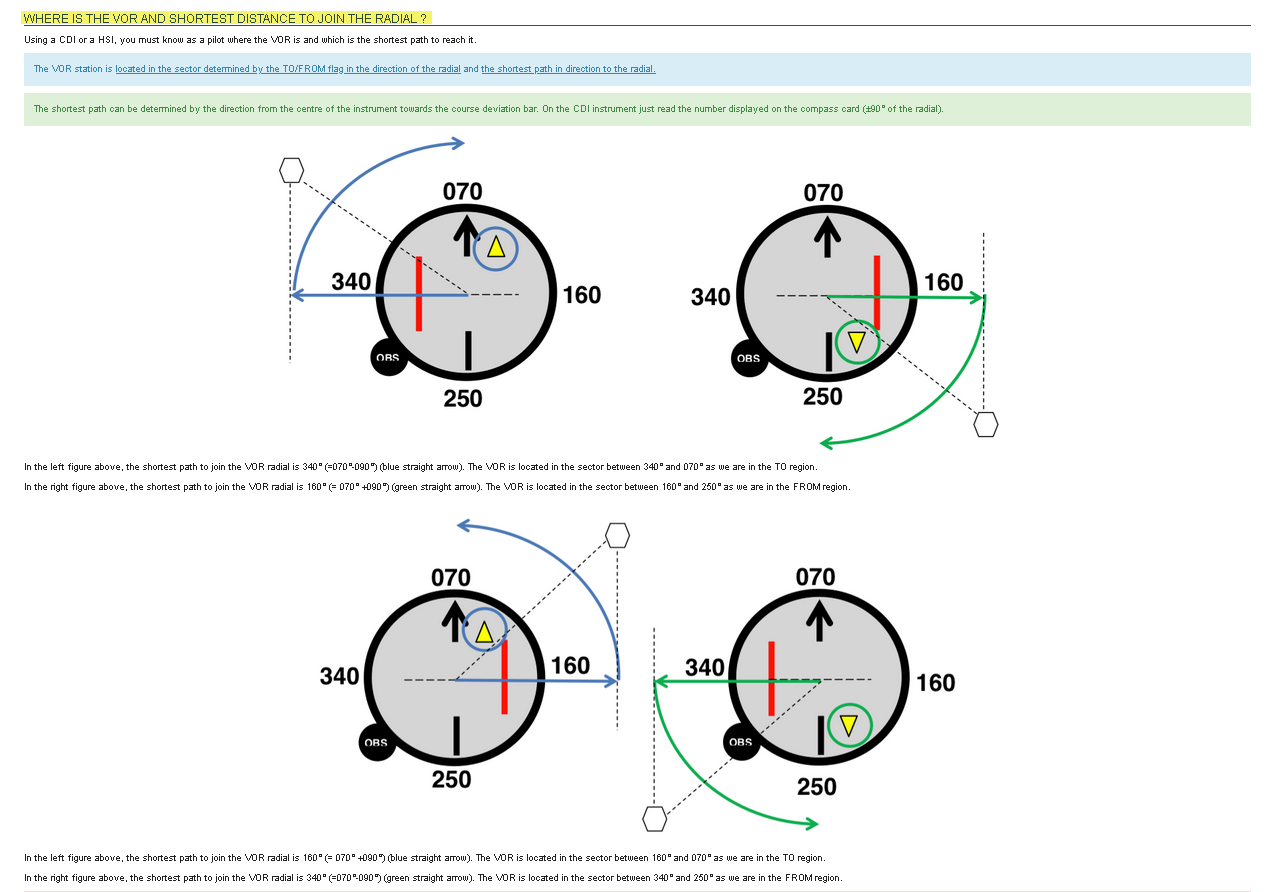 Of course, this would just be a tutorial exercise for the purpose of learning to visualize joining a radial at a perpendicular angle and turning the shortest number of degrees while doing so.

A more efficient technique would likely be a right turn to a heading of 120 or 130 degrees (a turn of 125 to 135 degrees) thereby intercepting the 090 degree radial outbound at a 30 to 40 degree intercept angle.

First, an ordinary HSI doesn’t contain digital logic to decide anything. Unlike an FMS or flight director, it no more tells a pilot where to go than a $5 compass recommends a direction to a disoriented hiker. Both simply present a display that informs the user of the situation. Even the full name - Horizontal Situation Indicator - implies those same limitations.

Next, if you think that in your scenario a left turn is the best method to get established on an easterly course of 090 from a navaid, then I propose we have a friendly imaginary race to demonstrate why that might not be the best choice.

We will run 2 heats. You will turn left while I turn right. We agree to perform standard rate turns, and fly at precisely the same airspeed.

Here are the objectives:

I will describe the results, and offer an illustration. Ready? OK, here goes…

Heat #1: You have already figured yourself correctly to be the winner because you have less turn to perform. Not 5 degrees less, but 10 degrees – you turn 175 degrees left to 180, I turn 185 degrees right to the same heading. Your margin of victory, however, is miniscule. A standard rate turn is 3 degrees per second, so I would spend just over three seconds more than you turning. But because we are heading in generally the same direction as we both initiate and complete our turns, the actual margin is much less. (the angular change doesn’t equal forward speed) Anyway, the victory is well within the margin of error and exceeds either of our abilities to control flight parameters well enough for consistent results. (as well as my ability to actually compute it!)

Heat #2: I’m providing an illustration for this one because this is where it really makes a difference. Because our objective is never just to get to a radial, we must consider our actions in the context of where we intend to go after we intercept. As you can see, I beat you soundly by a margin of 4 times the radius of turn. We could calculate a distance, but we don’t need to – at a standard rate of turn I will have beaten you by 2 full minutes.

Note: I just realized that 4xRadius is correct, but not 2 minutes. Because the 2 minutes spent turning in opposite directions was along an arc. Pi is probably needed here, but it’s getting too late to think on it and make a correction right now. 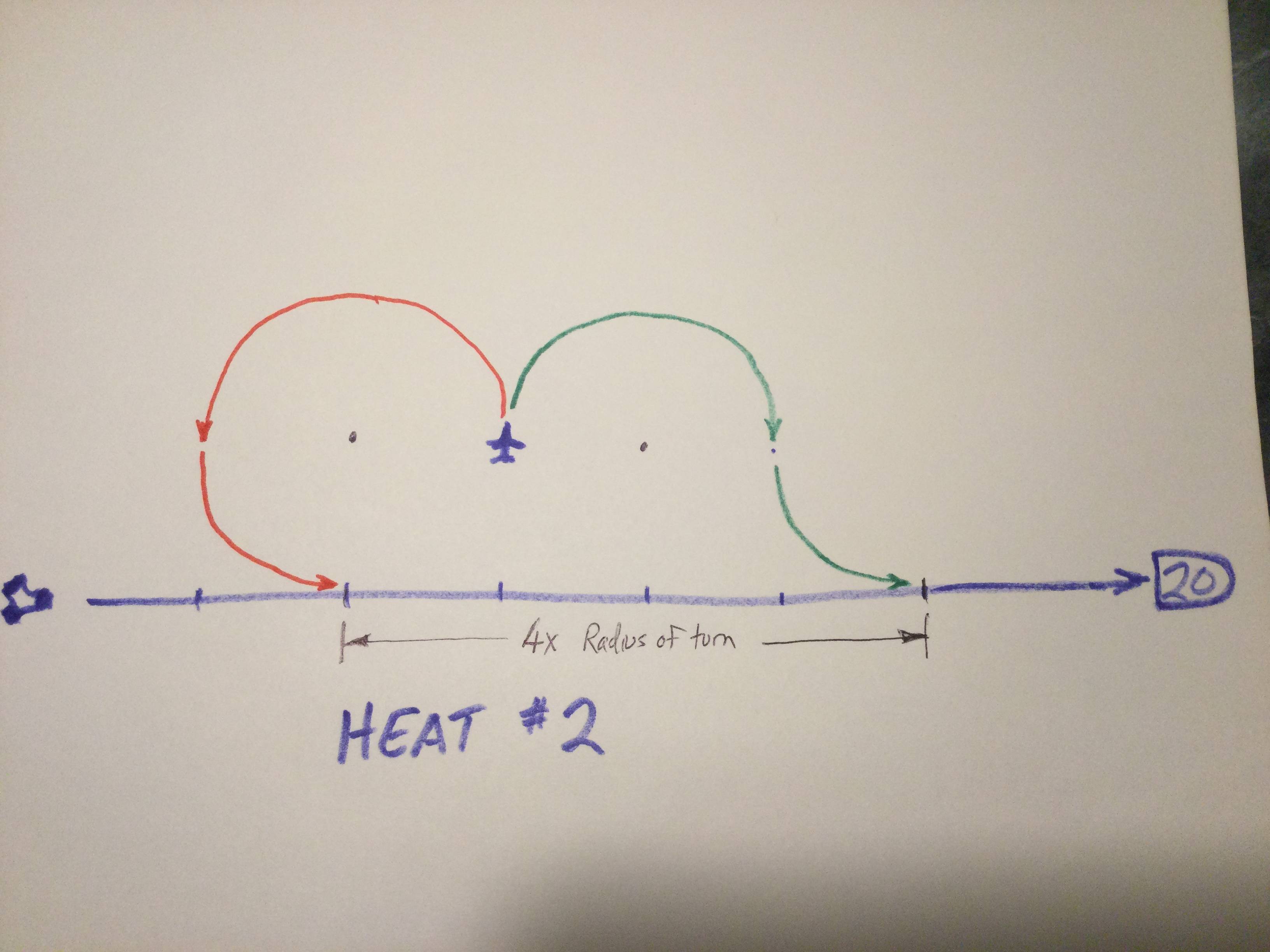 Reality: I would either make a right turn and proceed direct to the fix, or set up for an angle that will get me on the radial expeditiously, while not sacrificing downrange travel towards the destination. Because the real goal is to get to your destination in the most direct and efficient manner, you should generally always plan a turn in the direction of travel. Intercepting a radial is just one means to the end, and turning the opposite way to save a few seconds of turn will cost you way more in distance traveled in the wrong direction.

Angles between 20 and 45 degrees seem to be the best compromise for intercepting.

Not the answer you're looking for? Browse other questions tagged flight-instruments radio-navigation or ask your own question.

8
How does the A320 FMGC (autothrust, autopilot) decide which radio altimeter readings to use?
13
OBI, RMI, HSI... What combination do GA aircraft w/o glass typically have?
8
How does a horizontal situation indicator (HSI) work?
12
What are the differences between an OBS, a CDI, a Heading indicator, and an HSI?
6
When do I need to worry about a course deviation indicator reverse sensing?
8
How does Pitot Heat influence airspeed indication (assuming no ice or moisture)?
12
What navigational aid(s) would WWII bomber pilots have used while flying in instrument conditions?
0
What is the correlation between RNP level and the CDI indication?
1
If a CDI needle is deflected to the right, why is the aircraft off track to the left?
2
Selecting radials for radial interception