How much more dangerous is it to fly in Mexico than Europe?

Recently, Mexico's air safety rating was downgraded. How much more dangerous (in terms of statistical chances of fatal accident) is it to travel with a Mexican airline, than a European one?

To answer your title question with some numbers, here are the accident rates (number of accidents per million departures) for the world, Europe and Mexico from 2008 to 2020: 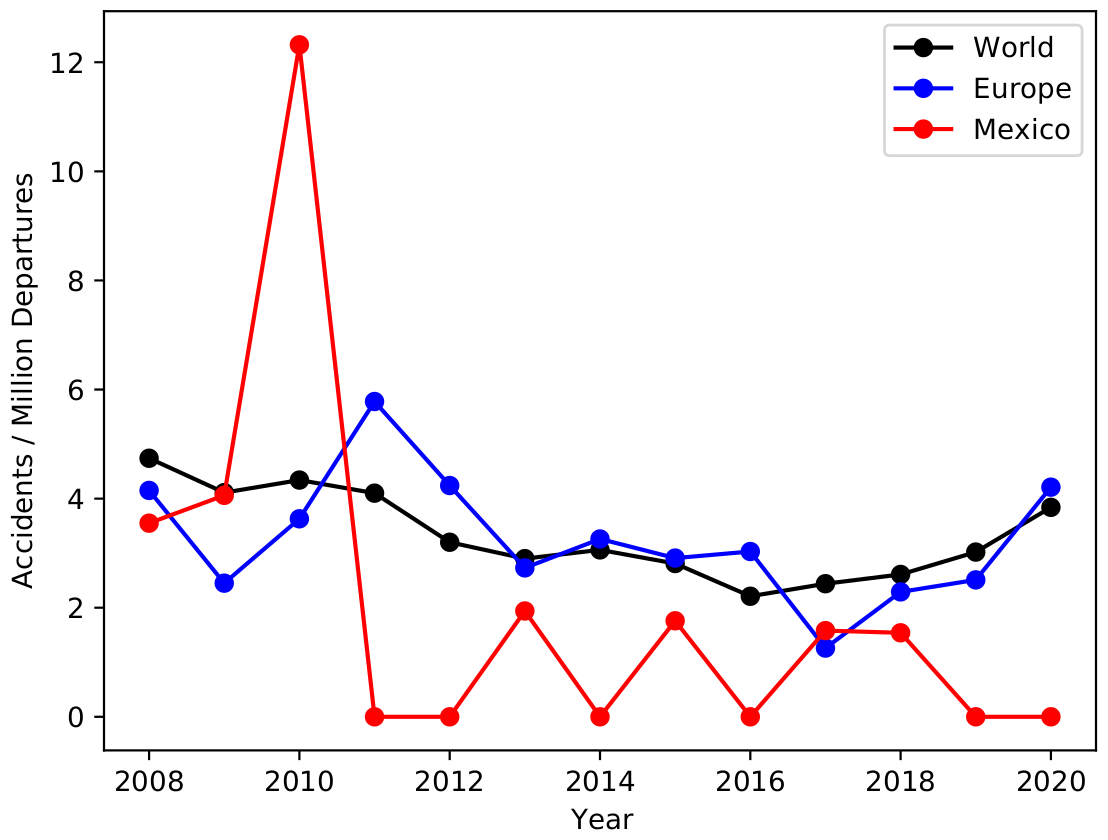 It's not quite what you asked about since the ICAO data does not filter by airline origin country and the accidents might include non-fatal ones (but not incidents, see What is the difference between aviation "accident" and "incident"?).

Nonetheless, it's clear that Mexico is not significantly less safe than Europe. The average accident rate since 2008 was 3.27 in Europe, but only 2.06 in Mexico. The plot above should make it clear that these numbers are fluctuating quite a lot because of the small number of accidents in each year. For example, the large peak for Mexico in 2010 is the result of only 6 accidents. One should therefore be careful when deriving any conclusions from these numbers.

Such audits are done by FAA to evaluate whether safety is correctly managed by the Mexican regulator in order to inform US DoT.

FAA found there is a problem in how Mexico is organized to supervise Mexican airlines, and consequently US DoT will prevent new Mexican carriers to enter the US market, freeze new routes creation, and will prohibit US carriers to sell seats on Mexican carrier aircraft, until this is fixed.

Nothing can really be drawn from the result. There are different domains evaluated, not being compliant in one domain is sufficient to be disqualified. FAA doesn't disclose the details of the non-compliance.

While this audit is performed by US for their own benefit, the framework used is the international framework of ICAO. ICAO also conducts audits in a continuous way. ICAO audit results can be viewed online with some details. Mexico was audited by ICAO in 2012. A comparison of results for Mexico (2012), US (2007) and France (2020, there is no "Europe" rating, ratings are by countries): 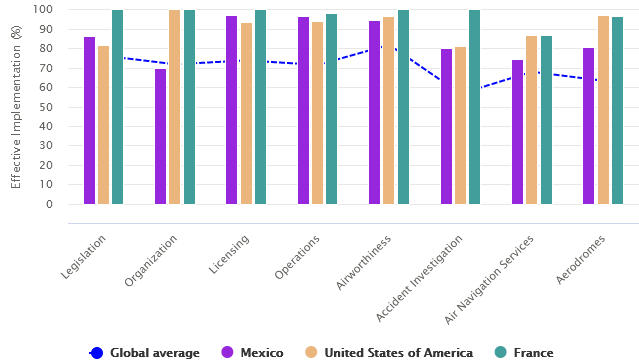 This comparison shows the Mexican authority is below the mean level regarding it's organization but also better than the US for licensing, legislation and operations.

How these categories are evaluated is described in the audit framework ICAO Doc 9734 part A: The Establishment and Management of a State Safety Oversight System (respectively §3.3, §3.6, §3.1 and §3.2). Exactly like ISO 9000 audits, both ICAO and FAA audits are related to the management system ability to detect and correct problems in carrier operations, they are not related to how airline actually perform their operations.

Bottom line: We don't know how Mexican carriers perform, we know they are overseen by a non-compliant regulator according to FAA, due to one or more unknown weaknesses.

Chicago Convention: Obligations of the States

Mexico is a member of ICAO and signatory of the Chicago Convention. As such Mexico has legal obligations, which fulfillment is delegated by Mexico government to AFAC, the Mexican regulatory agency, counterpart of FAA for Mexico. Contracting States have safety-related obligations, in particular with art. 37 and 12:

(37): Each contracting State undertakes to collaborate in securing the highest practical degree of uniformity in regulations, standards, procedures and organization in relation to aircraft, personnel, airways and auxiliary services in all matters in which such uniformity will facilitate and improve air navigation.

(12): Each contracting State undertakes to adopt measures to insure that every aircraft flying over or maneuvering within its territory and that every aircraft carrying its nationality mark, wherever such aircraft may be, shall comply with the rules and regulations relating to the flight and maneuver of aircraft there in force.

ICAO members agreed on a continuous audit approach which abbreviation is USOAP-CMA (USOAP website) to evaluate how States fulfill their obligations. ICAO and FAA audits are based on the same reference, ICAO Doc 9734 part A: The Establishment and Management of a State Safety Oversight System, which includes 8 domains, either for rule-making or for rule-enforcement: 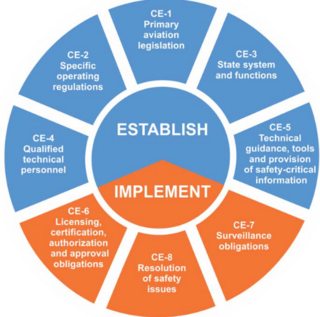 FAA conducted their IASA in May 2021. Objectives, from FAA:

The results are the one you're talking about in the question. The fact that Mexico was found to be not compliant to ICAO standards, means they were found to have one or more of these problems (source):

Consequences from a FAA standpoint

While the new rating allows Mexican air carriers to continue existing service to the United States, it prohibits any new service and routes. U.S. airlines will no longer be able to market and sell tickets with their names and designator codes on Mexican-operated flights. The FAA will increase its scrutiny of Mexican airline flights to the United States.

It is the second time that Mexico is in Category 2. The first time happened in 2010, and it took the government four months to regain its prior status.

Not the answer you're looking for? Browse other questions tagged safety accidents accident-statistics mexico or ask your own question.

21
What is the difference between aviation "accident" and "incident"?

23
Where is the safest seat in the plane?
20
Are the first solo flights by a student pilot more dangerous?
5
What were the historical safety statistics of airplanes?
29
Are grass strips more dangerous than tarmac?
6
People say that modern airliners are more resilient to turbulence, but I see that a 707 and a 787 still have the same G-rating. Why is this?