Once pressure distribution is established, why soft wing at zero AoA without battens can't maintain shape?

Imagine we have soft wing with curved battens installed in wind tunnel set at zero AoA.Wing has camber,so it produce lift.

If we remove battens from wing during wind tunnel test when wing produce lift, why wing will lose shape if it seems that pressure distribution must hold the shape,high pressure under, low above?When I say maintain shape,I dont mean stricly follow batten shape,but at least wing has some belly and dont flutter.

Reality is, wing cloth will start to flutters like flag in the wind.

I know that lack of support at leading edge where stagnation pressure push will deform this part but peak pressure drop and all low pressure above and high pressure under has tendency to lift cloth up and make some belly,at least theoreticaly.

(I ask this purely out of curiosity,normally it makes no sense to use soft wing without battens.) 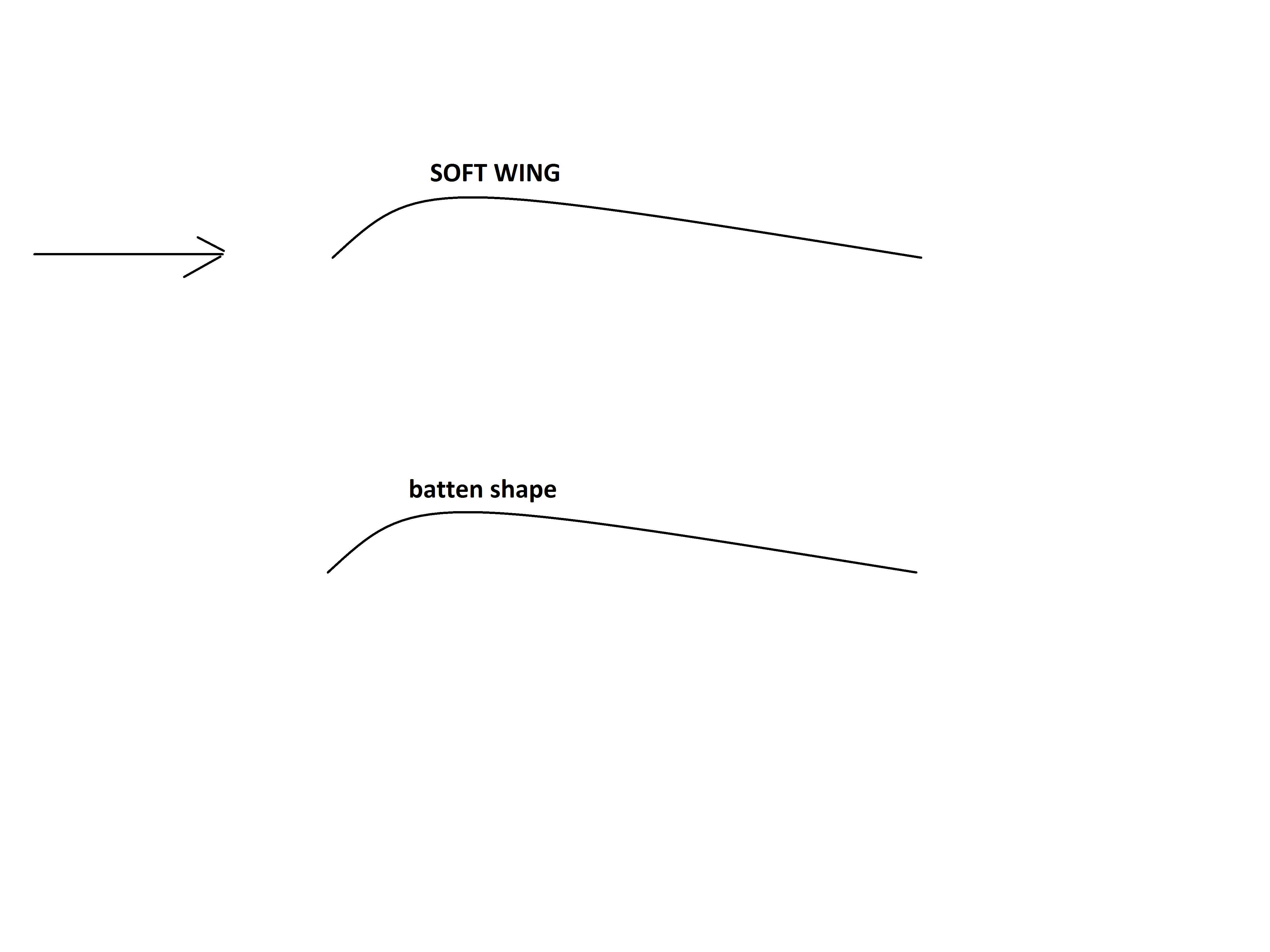 We might be able to start by trying to fathom why a flag flutters in a breeze. If one considers a soft (non-battened) airfoil they may do well to consider the material it is made of. Many sail fabrics stretch and contract with wind drag, resulting in a disruption of the airflow that holds the soft sail shape. Woven titanium may have less of a tendency to do this (wind tunnel study).

Sails, the obvious application, are not designed at all to function at low angles of attack as sail boats can only point so far into the wind before they lose forward propulsion. The "luff" or flutter is a good sign to increase the angle to the wind and allow it to "fill" the sail.

This might lead one to believe bottom pressure holds the sail shape, and indeed, at higher angles of attack, the suction peak moves forward, helping propel the boat. At lower angles of attack (with a soft thin undercambered airfoil), inconsistencies and turbulence under the wing will cause changes in its shape, which affects the airflow above. Local pressure fluctuations then cause the "luff". Battens$^1$ help prevent this.

One may imagine sails at higher angles of attack to be "stalled", but we must remember they are not required to produce "lift" (which would force the boat sideways), only thrust from the forward suction peak.

Aircraft airfoils simply are different in that they must support the aircraft weight with as little drag as possible, and any "luffing" would be disastrous. Therefor aircraft airfoils must be supported to avoid sudden collapse at low or negative AOA.

Although non supported airfoils may be possible for ultralight aircraft, they would carry higher risks best avoided, particularly with two separate wings as compared with a parachute, delta, or Rogallo wing.

In simple terms: Without battens in place to hold the shape, at zero AOA the airflow on the bottom will not “fill” the concave area underneath. Instead it will simply rush on by, “sucking out” existing high pressure air along with it. This will negate any pressure differential that might hold the shape and cause it to flap.

2
Are these pressure and velocity distributions calculated by CFD simulation correct?
8
Is the low air pressure on top of the wing the major contributor to lift?
10
Why do wall-to-wall airfoils in wind tunnels produce no (or infinitesimal) downwash?
8
Just how do the underbanking and overbanking tendencies work?
1
Could a triplane fly using a dihedral wing in the middle?
1
Tapered Wing Providing low Coefficient of Lift
0
Will 3D wing has smaller drag than 2D at same AoA and airflow speed?
5
Do wall-to-wall airfoils produce induced drag?
1
Wing vs wall to wall wing,total drag comparation at same AoA?
0
A question regarding airfoil parameters