Can a wing be stalled at a speed larger than its stall speed?

I was told pulling the yoke quickly and all the way back stalls the plane immediately. I believe this is not possible as long as this occurs above the stall speed.

I think about a styrofoam plane: Increasing the pitch angle (same effect as pulling the joke) just makes the plane turn up with a small radius, but it doesn't stall.

When I fly in straight line how can I provoke flow separation at wings above stall speed?

So when I fly in straight line how can I force flow separation at wings above stall speed? I think this is impossible.

Stall is a matter of angle, not speed

There is no stall speed, you can decrease speed or increase speed as long as you manage to remain below the stall angle.

Stall happens when the angle of attack exceeds the maximum angle of attack for the airfoil. So to stall you just need to increase pitch until the stall. This is how GA pilots train for stall prevention and recovery, see this video.

[My friend] thinks if he pulls the yoke all the way back as fast as possible, the plane will stall and immediately drop. I think this is impossible at speeds above stall-speed.

Your friend is right. This is the case of the last example. Again there is no stall speed, it's $\sf \color {orange} {\text {only}}$ a matter of angle of attack.

Reason for flow separation during stall

So flow separation is consequence of plane that "falling down" not initial reason why plane starts falling down.

No, flow separation is the consequence of air no able to follow the airfoil curve, because the angle between air direction and the curve is too high, so inertial effects are too strong compared to effects which make air following the surface. Inertial effects make air continue on its momentum instead of curving.

As air doesn't follow the airfoil curve, the pressure field is not able to create enough lift, and the aircraft loses altitude due to its weight. But losing altitude is not the cause of the flow detachment. To convince yourself, let's use a wind tunnel. The airfoil is fixed, so it cannot move down when lift decreases. From the linked video:

The airfoil is at the same location, but the flow has detached due to the angle of attack. The inertial forces won over the viscous forces, air now follows its momentum and eddies form:

So no vertical movement is required for stalling the airfoil.

Case of stall in level flight and apparent "stall speed"

Explain me why airflow stay attached at 61kts but separate at 60kts?

Again, this is not a matter of speed, but angle. You might be confused by the fact that if you want to fly level, and start decreasing the speed by decreasing the engine power, then the angle of attack must be increased. So:

If you try to stall the same wing in descent, the angle (the angle of attack, not the pitch angle) will be the same, but the speed will likely be much larger.

But actually the stall is not so abrupt.

Stall is not lift on/off, it's progressive

At some point the angle is too large, regardless of the speed, lift starts decreasing. Here is a typical lift coefficient vs. angle of attack curve: 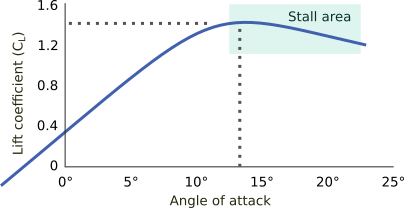 We see lift stops increasing with the angle of attack near 13°-15°. Then it decreases. This is the stall.

Can I climb while in the stall area?

Yes you can. That's not contradictory.

When the angle of attack is near the stall angle, the coefficient of lift is not 0, it is only decreased, if we continue to pitch up, it will continue to decrease, there is no possibility to increase it up (see the curve).

($A$ is the wing area, $\rho$ is air density, two constant parameters).

If we increase the velocity by 30% instead of 20%, then we starts climbing.

But let's not forget in the stall area of the curve,

Do I need lift at all?

I think about a styrofoam plane: Increasing the pitch angle (same effect as pulling the joke) just makes the plane turn up with a small radius, but it doesn't stall.

How do we gain altitude? By a force directed upward and larger than the weight. Lift is such a force, but it's not the only one.

For example a rocket has no wing, therefore doesn't produce lift, but the engines produce thrust. As long as thrust is larger than weight it's possible to ascend. Rockets have huge engines because they are heavy.

What about a styrofoam plane? It's very light, probably only a small force is required to make it gain altitude, therefore the propeller may be sufficient by itself to gain altitude if the airplane is pitched vertically. In that case it doesn't matter if the wings generate lift or are stalled. That's why you can exceed the stall angle, generate no lift and still can make the aircraft climb on its own momentum and the thrust provided by the propeller.

The wing in this case is used like the empennage, it just acts like a windvane and orient the fuselage. At this point, the aircraft doesn't fly anymore (flying means lift), it is propelled by the engine.

Stalling doesn't mean the aircraft must fall immediately. It falls only if there are no other forces but lift to oppose its weight.

Is it possible to actually reach the stall angle at high speed?

For many aircraft stalls are difficult to trigger at high speed because its actually difficult to reach the stall angle. This angle is about a 15° nose up relatively to the airflow (not to the horizon). At a large airspeed, the aircraft has enough momentum to climb when pitched up, and therefore it remains at a low angle of attack until the speed decreases and a stall at low speed is triggered.

A way to trigger a high-speed stall is to increase the load factor (g) e.g. by performing a steep turn.

5
How can an airliner have low altitude stall recovery?
3
Is there a new "best practices" technique for demonstrating stall recovery?
5
Is it possible to maintain horizontal flight with the angle of attack above critical value by increasing speed?
1
How do aircraft stall warning systems handle (or not) asymmetric-stall situations?
2
How to design a near vertical take off airplane?
3
Are larger airplanes more likely to stall?
4
In this F-104 V-n diagram, why does the stall speed (in terms of IAS) decrease with altitude in some parts of the flight envelope?
4
When pitching, how do planes establish a pitch rate which corresponds to the centripetal acceleration?