What is the minimum number of runways required for an International Airport to be operational - commercial aviation? 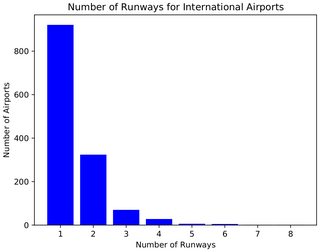 As you can see, most international airports (921) actually only have a single runway. The following plot shows the same histogram with a logarithmic y-axis: 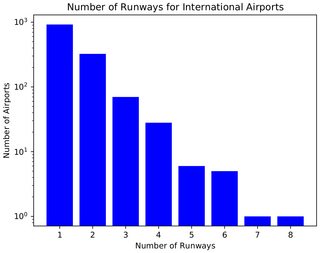 There is one international airport with 7 (KDFW) and one with 8 (KORD) runways. The following plot shows a pie chart of the number of runways: 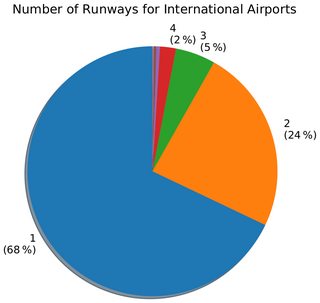 About 2/3 international airports only have a single runway. Less than 1% have more than 4.

There is no such requirement for an international airport, so the strict answer is zero landing area, and the practical one is one landing area, which can be a landing strip or an helipad.

In fact most international airports have only one landing strip because this is not possible or not justified to build and maintain more. This landing strip can be used in both directions (creating two runways), and both for landing and takeoff. A strip may be constrained in one direction, for landing and/or takeoff due to obstacles preventing adequate clearance or environmental reasons.

From the aeronautical information for Tahiti International Airport (NTAA) we see it's a single strip airport. Note customs availability in the services section:

So to answer your question briefly, an international airport:

Formal definitions for international airport are detailed below if you are interested.

Any airport designated by an ICAO Contracting State in whose territory it is situated as an airport of entry and departure for international air traffic, where the formalities such as customs, immigration, public health, agricultural quarantine and similar procedures are carried out.

Relating to international flight, it means:

Many international airports are located on touristic islands and most of them have only one landing strip (which can be used in one or both direction, creating one or two runways).

Princess Juliana International Airport (TNCM) is a good example of such medium sized airport with customs and only one landing strip:

Another element for promoting an airport to international status has been mentioned by @rtaft in a comment:

There are many small international airports along the US Canadian border that only deal with small aircraft flights between the two countries, as well as some along the Mexican border for Mexican flights.

The decision to build a second strip is usually driven either by the existence of strong cross winds or the volume of operations.

In Germany, Lufthansa (the German flagship airline) and Deutsche Bahn (German railways) have a cooperation, where some Deutsche Bahn trains also have a Lufthansa flight number and Lufthansa sells airline tickets for those trains. As a result, some German train stations have an IATA airport code. And at last at some of them, I believe you can have your luggage checked through all the way onto the train and go through customs at the arrival train station.

So, that would technically be an International Airport with zero runways and no aircraft movements.

Serious answer: one, Bianfable is correct.

Slightly less serious answer: zero. In principle, there are scheduled flights from CHX (Vancouver Harbour) or YWH (Victoria Harbour) to LKE (Seattle Lake Union), all three of which of which solely operate seaplanes and have no "runways" in the normal sense of the word.

(I say "in principle": it appears that at the time of writing the scheduled routes have been suspended. But that will presumably lift, eventually.)

There are a few other Canadian airports with only seaplane facilities that are classed as ports of entry by the Canadian authorities, and thus could in principle have international travel, eg Whitehorse or Seal Cove, but Victoria & Vancouver Harbours seem to be the only two pure-seaplane sites with a (normally) scheduled service.

In the Caribbean, there are scheduled services from the US to NSB (North Bimini, Bahamas), which is a purely seaplane site. (The US end seems to be Fort Lauderdale, which is definitely not.)

So, 1 runway would be the minimum for an international airport.

Ketchikan International Airport in the State of Alaska, USA has one runway.