Does a diesel piston engine's power decrease more slowly with altitude than with an AVGAS engine?

I have a power-altitude curve of the Austro Engine AE-300 provided by manufacturer and I don't know the reason why power decrease lower than other engines. The curve is in the end of the pdf in this link: https://austroengine.at/uploads/pdf/mod_products1/AE300_Technical_Data_Sheet.pdf

Welcome to the community! Because the Austro Engine AE-300 is a diesel engine,(JetA/Kerosene and Diesel are very similar) it is equipped with a turbocharger. Turbochargers compress the engine's intake air to maintain Sea Level air density so that the engine produces full power as you climb into less dense air.

Speaking of car and truck engines, diesel engines are often equipped with a turbocharger to increase the intake air pressure.

Turbochargers are very useful for aircraft since they fly up into altitudes where the air becomes less dense, reducing performance.

When flying a non-turbocharged gasoline engine airplane the loss in engine performance becomes quite noticeable when climbing through 5,000'. If it is a hot day with a high density altitude the performance loss will occur at an even lower altitude.

The non-turbocharged IO-360 is the equivalent, typical and common General Aviation engine to compare the AE-300 to, in terms of horsepower and performance, but it does not have a turbocharger.
Therefore, when you climb into thinner air the engine gets less oxygen and creates less power, resulting in the altitude performance drop-off in the chart you linked to.

It is not because it is a diesel engine, though diesels are more likely to be designed that way.

The engine is so called “flat rated”. That means its power is not limited by simply not being able to burn any more fuel at given piston volume and RPM, but by the peak pressure or temperature.

The controller limits the amount of fuel that can be injected at density altitudes below 9000ft to prevent exceeding those parameters and damaging the engine. Without that the power curve would have the same slope as for the IO360, but the engine would have to be much heavier.

But you don't actually need that power at low altitudes. Drag is the same at the same indicated airspeed, you need the same thrust to maintain your optimal cruise speed at any altitude. But power is thrust times velocity, i.e. true airspeed, so at higher altitude you need more power to maintain that indicated airspeed. So by flat-rating the engine it can allow cruising higher without making it much heavier.

Now diesel engines are more likely to be flat rated.

So because adding turbocharger increases the power with less weight than making the engine bigger, all diesels are turbo-charged these days and have been for quite a while. And adding a bigger turbo to an engine is relatively small change that allows pushing the maximum power to higher density altitude, so once the engine is turbo-charged, it's the logical next step.

I would add that the big aircraft engines of 40s and 50s were all flat-rated, often to over 15,000 ft. I.e. their power curve had similar shape to what they show for the AE300 even though they were spark-ignited engines.

E.g. the huge Wright Cyclones were limited to 54 inHg manifold pressure for take-off and 49 inHg manifold pressure continuous, but they'd go well above that if you firewalled the throttles at sea level. And they had a second stage turbo-charger that the flight engineer only turned on above around 8,500 ft. At the time there were no electronic engine controllers, so the crew had to pay close attention to the manifold pressure gauge to avoid damaging the engines.

It's all about the air compression! 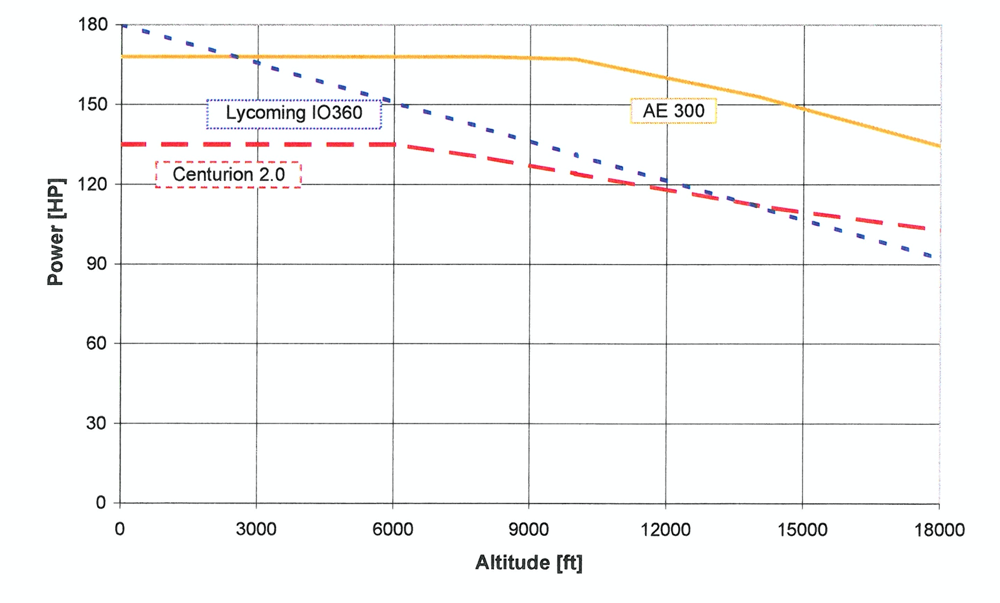 The graph that you mention shows two diesel/jetfuel geared piston engines, and one avgas direct drive piston engine, the Lycoming IO360. The two diesel engine graphs have a horizontal slope at lower altitudes, which is indeed caused by an intake air compressor. 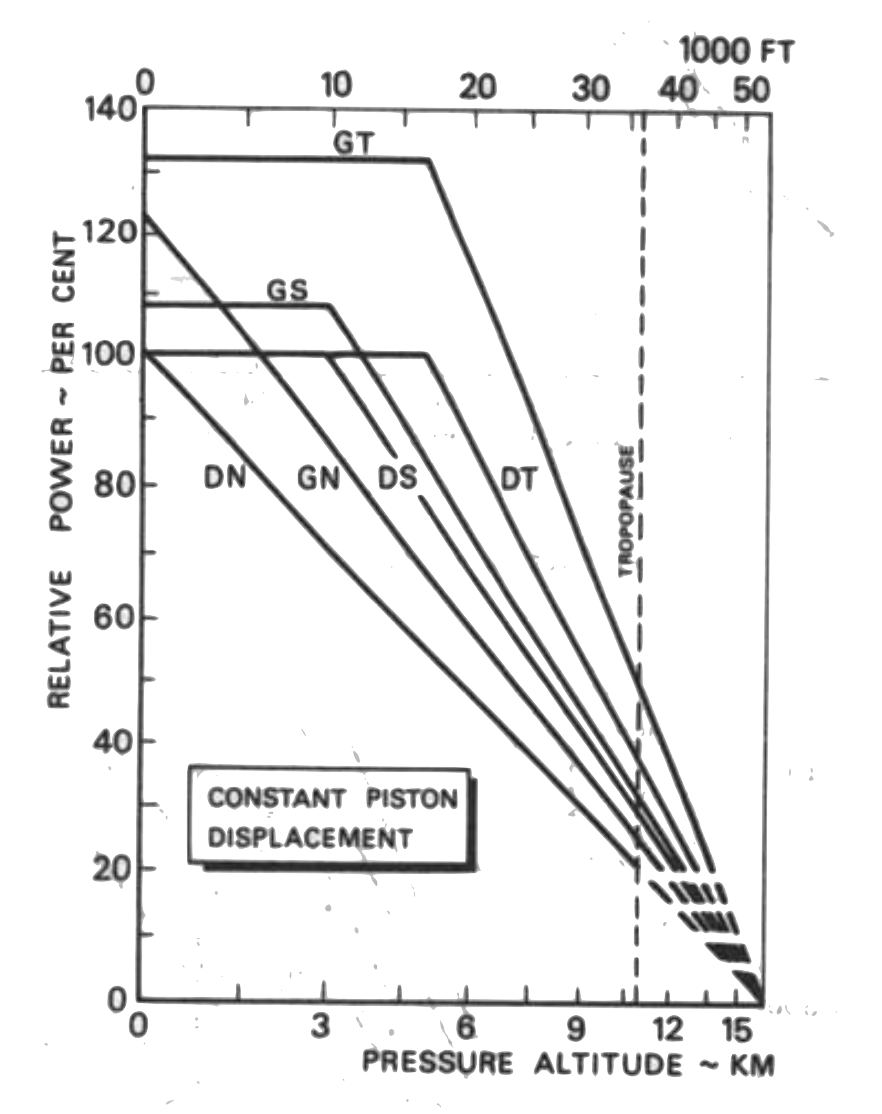 The figure above is fig. 4-7a from Torenbeek, Synthesis of Subsonic Airplane Design, and compares different configurations of carbureted avgas pistons engines at constant piston displacement. As can be seen:

The interesting bit of the graphs is what happens to the right hand side: they all disappear into 0% at 16.5 km altitude. So the higher the initial power at 0 km, the steeper the decline into zero at 16.5 km. And I believe this is basis of the OP question.

So the question is indeed: why do the diesels not follow the general trend shown in the Torenbeek graph? This is because of the better thermal efficiency of a modern diesel engine with common rail injection:

Not the answer you're looking for? Browse other questions tagged piston-engine density-altitude diamond-da40 avgas turbocharged or ask your own question.

2
Does throttle equal power on a turbocharged piston engine?

11
To a pilot, does turbocharging differ from supercharging?
9
Is there an FAA ruling about the airworthiness of piston engines with less than 60 on the compression test?
10
How is pressure related to air density?
24
Why does manifold pressure increase with power?
23
Why do piston engines in aircraft burn fuel at a higher rate than a comparable car engine?
2
Why are ethanol piston engines apparently cheaper to maintain than avgas piston engines?
3
Can leaning provide more power when running at full throttle?
6
Why aren’t diesel piston engines used on aircraft like the Saab 340 or L-410?
11
Why are pressure levels raised on warm days?