What if you have a double-engine failure after V1 but before VR?

Imagine an A320 on the runway, starting its take off roll. The PM calls out "$V_1$". Just a second after $V_1$ is called out, and before $V_R$, you encounter a double-engine failure (an A320 has only 2 engines). Now, you've got no engines working. You also have less than the runway length required for you to decelerate on the runway. What should you do next?

The Airbus A320 FCTM (Flight Crew Training Manual) does not describe any procedure for rejecting a takeoff after reaching V1:

Nothing further is mentioned about rejecting at a later time. However, the FCTM and also the QRH (Quick Reference Handbook) never even consider a dual engine failure during takeoff. Only a dual engine flameout at high altitude is considered. Not even a dual engine failure at low altitudes is mentioned, although my copy of the FCTM is a bit older, so it does not include the changes made after AWE1549 (the miracle on the Hudson). The final accident report says

I assume they made some changes after this accident.

Rejecting the takeoff after V1 is not recommended unless the captain judges the airplane incapable of flight. Even if excess runway remains after V1, there is no assurance that the brakes have the capacity to stop the airplane before the end of the runway.

Rejecting after V1 is only allowed if the airplane is incapable of flight. This is certainly true after a dual engine failure before VR because you cannot climb safely below V2 (and you cannot maintain V2 anyway). Even the attempt to rotate the plane before VR would likely result in a tailstrike.

The Boeing 737 NG FCTM further shows the effect of a late reject decision: 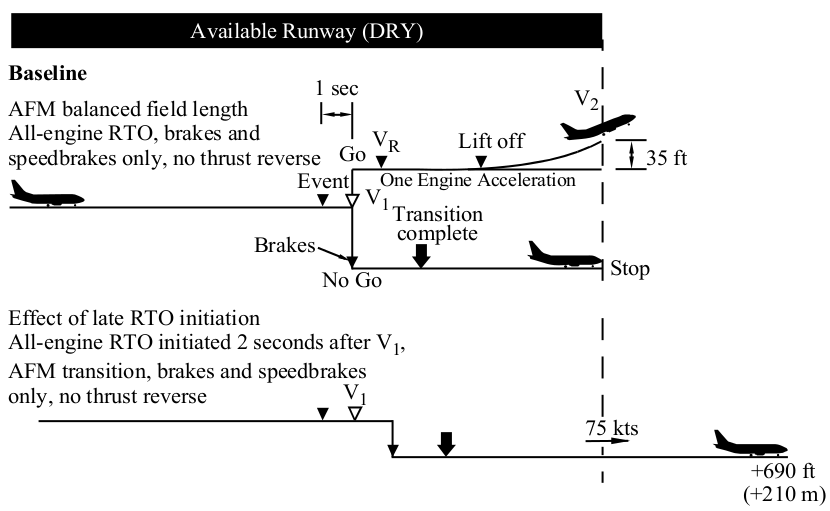 However, this does not necessarily imply that the airplane leaves the runway. That is only the case if V1 is limited by runway length. If V1 is instead limited by Vmbe (maximum brake energy), there would be more runway available, but the brakes might fail before coming to a complete stop. The best case is if V1 is limited by VR, which might give you both enough runway and enough stopping power to come to a complete stop (your scenario describes the failure between V1 and VR, so this cannot be).

In any case, the best decision if the airplane is incapable of flight is to attempt an RTO. It is better to crash at low speed than to crash at high speed after trying to get airborne. The runway might even be equipped with an RSA or EMAS, which reduces the risk of severe damage and helps to stop sooner.

One-engine failure (OEI) and all-engines failure are not approached the same way.

The different likelihood associated with these two cases are not mitigated the same way:

EMAS are useful both for takeoff and landing, to prevent runway excursions. So they tend to be more acceptable economically. There are several questions on the site about EMAS. However EMAS and similar arresting system are not full guaranties for a safe stop, the aircraft has still to roll in straight line to reach them.

For events that are assessed and found to be very unlikely, there is no specific solution except prevention, crew best judgment and skills to manage the unexpected. This is not different from other domains.

What would the crew do? They would brake using all possible means and use their skills either to maintain the aircraft on the runway, or on a taxiway, or anything they can do.

@Bianfable has detailed some of the guidance available in his answer.

In this scenario, many elements have been anticipated, random examples:

Question: What should you do next?

I am not aware of any published procedure that has been written in anticipation of the unlikely dual-engine failure scenario in the OPs question. But, in my opinion, I would think the following actions would be reasonable:

Thust levers closed, auto throttles disengaged, apply max braking (or if auto-brake RTO is set ensure it's working correctly), ensure all spoilers/speedbrakes are fully deployed, apply max reverse thrust (for any potential benefit of residual reverse thrust during engine spool-down), tell the cabin to brace for a crash and advise ATC so emergency response can be initiated.

Do not attempt to fly a plane incapable of flight!

What goes up must come down. The "coming down" will be Very Bad, and occur probably at destructive vertical speeds and definitely at a site not engineered for that purpose.

As my martial arts teacher says about falling... you are already on the ground. So is a rolling airplane. While you may not be able to stop in runway length, your collision energy will be much lower by the time you exhaust the remaining runway, because you have used that remaining runway for max braking.

And most runways have been engineered for runaway overruns, with crushable things like "breakaway" lights and antennas (a great deal of experience crossed over from highway design) inside the fence... and easements outside the fence so that hard things are not built along the extended runway center line.

If you have reached 88 miles per hour, immediately activate the flux capacitor and quickly select a year.

If both engines have failed there is no choice to make. You aren't going flying. Abort immediately and you will eventually stop... somewhere. Brake at maximum capability, ensure spoilers deployed automatically when you pulled the power to idle.

The thrust reversers won't have any thrust to reverse. It could be argued/debated that deploying them could create some minimal drag/cancel any residual thrust while the engines spool down.

What else can you do? Follow your rejected takeoff procedures and hope like hell you can stop in the runway remaining.

Not the answer you're looking for? Browse other questions tagged airbus-a320 engine-failure v-speeds or ask your own question.

3
Has there ever been a two engine Air Carrier where both engines failed during the takeoff run resulting in an accident?

16
How is minimum runway length related to V1?
9
What are the reliability statistics for modern jet engines?
7
Should you immediately attain max glide speed after engine failure?
20
Why is the takeoff decision point based only on speed and not time or distance?
2
Is reducing V1 a viable option for pilots when the ASDA is shorter than the ASDR?
1
Why should a Piper Seneca not take off after an engine failure below 100MPH?
7
Why does the A320 use the rudder for lateral control in mechanical law?
6
Why not separate out the two definitions of V-1 into two separate Vspeeds?
4
Why aren't quadjets required to remain controllable after a sudden, simultaneous failure of two engines on one side?