While interpreting an RKPS(airport located in South Korea) LOC DME 06L, I found it somewhat confusing. 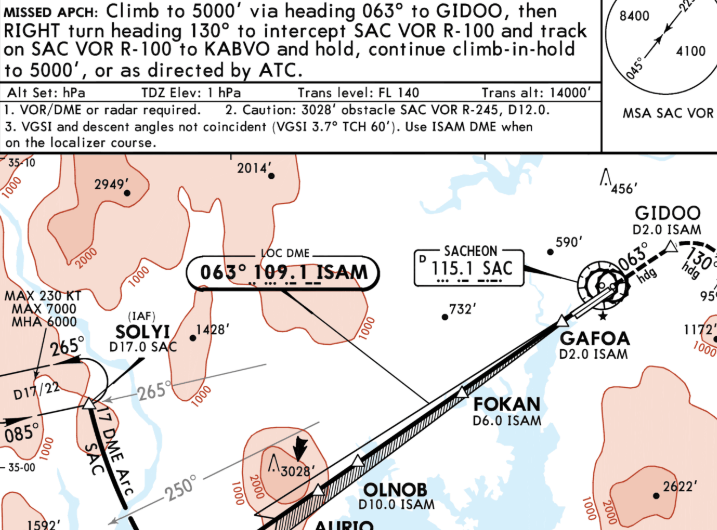 As you see, the initial action of the missed approach is climbing via heading 063 to GIDOO.

I can understand without any doubt if the chart states that I have to maintain track 063 rather than heading 063. I'm flying in C172, so the wind correction angle for maintaining track 063 will be big if the wind exists. But, if I maintain heading 063 as defined in the chart, I will not be able to reach GIDOO which might be determined by DME distance plus Radial from VOR or Localizer.

I tried to find GIDOO in other charts, but I couldn't.

So, what I want to know is, what should I maintain while executing missed approach procedure?

In my opinion, we can't get any radial information from the localizer(we can't get a reliable signal from the course other than preselected final approach course), so I have to maintain heading 063 then when I reach 2 DME from ISAM, turn right heading 130.

Is it the correct action? or Do I need to maintain track 063? or.. Tracking back course localizer to GIDOO?

In my opinion, GIDOO is 2 DME from the ISAM localizer antenna while on a heading of 063 degrees. It's not the intersection of 2 DME and the localizer.

Much like the next segment of the missed approach procedure where you turn to a heading of 130 degrees and join the SAC VOR 100 degree radial, the point at which you actually intercept this radial will vary depending on the wind.

It is true, a track will send you directly over GIDOO but the missed approach text says to fly a heading. It would take a strong wind to have any real effect on the offset from GIDOO when you cross it.

Most likely there are other aircraft on radar vectors and are being affected by the wind just like you would be so separation from an ATC standpoint is achieved.

I will need a little bit more context and need to see the entire approach plate, but it appears GIDOO is defined 2 NM DME from the localizer antenna along the localizer back course (this assumes the final approach heading is 063° magnetic as well). We would need at least two navaids to locate and identify GIDOO. This can be accomplished with the localizer DME, either along with localizer back course, or along a radial of the Saechon VORTAC which intersects GIDOO at 2 DME ISAM.

Not the answer you're looking for? Browse other questions tagged ils jeppesen or ask your own question.

4
(See Included ILS Chart) What to Do After SMT RDL 084?
9
What is "(CFMCC)" on an ILS approach chart?
0
Has Jeppesen stopped providing ARINC424 data?
2
How can I identify the FAF on this Jeppesen chart?
10
Why are different distances listed for the ILS and the LOC on this approach chart?
5
What’s the grey altitude depicted in the profile view on Jeppesen charts?
2
What does the * (asterisk) next to radio and nav aid frequencies on Jeppesen charts refer to?
12
Where are the "Admitted Aircraft symbols" on Jeppesen VFR aerodrome charts defined?
0
What is the difference between Jeppesen NavData & Digital Terminal Charts?
0
Jeppesen airport codes for holding positions - catstops