Is this image of Compressor aerodynamics correct? 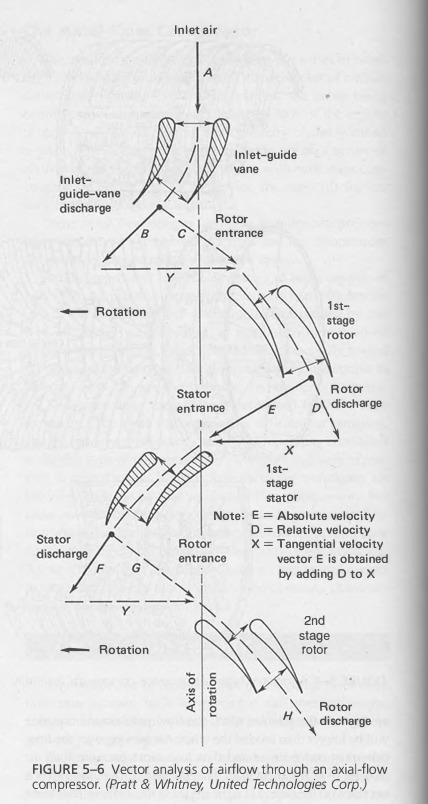 The rotation direction of rotor shown seems opposite. If it is correct, these are the questions I would like to ask:

@Federico reminder has complicated a bit the answering process, but now we understand your actual problem, I can provide a focused answer immediately below, I've moved other elements at the end, you may ignore them as they were aimed to clarify your question and are indeed no more relevant.

If I consider Y as relative velocity, Then X should also be the same, though in opposite direction, right?

Good point, they are the same magnitude. There is some approximation in the drawing:

I am not able to understand the term defined by X

IGV have no velocity-to-pressure conversion function, their role is only to create the correct angle of attack for R1. The equal length arrows emphasize an IGV channel is neither diverging nor converging: 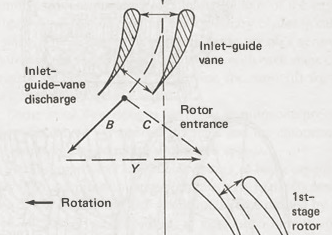 If the velocity magnitude at the first stage inlet has to be adjusted relatively to the ram velocity, with such IGV, this must be done by the engine inlet duct, prior to the IGV.

The stator vanes have a double role, the one explained above for IGV, and the one to convert energy added by X into pressure.

Your initial questions are answered below.

Why the Y vector is in opposite direction?

Y velocity is the relative velocity of air for the rotor, it's opposed to the rotor actual rotation. It's like air coming from front when a wing moves forward:

How will the pressure zones (high and low) will form on the rotor and stator airfoils?

Blades and vanes are simple airfoils, which here are subject to chordwise winds C, E and G, exactly like regular wing airfoils. Pressure gradients will form like on any airfoil. E.g. for C and the first rotor blades, on the left your drawing, on the right the same drawing rotated:

This one sort of reminds one of the physics quandary of whether light is a particle or a wave. Let's treat the incoming air as a continuous energy wave.

One can see, although the incoming airflow is 90 degrees to the next part of the inlet/rotor/stator/rotor diagram, the trailing edge of the "top wing" would "bounce" the wave right into the oncoming next set of "wings" at the proper (relative) angle of attack.

Keep in mind there are a whole ring of "wings" for each stage, and that jet compressors can be "stalled" by a sudden change in inlet airflow (to be avoided). This is why jet nacelles protect the compressor inlet.

At first the inlet vanes look "backwards", compared with the stator vanes, but the diagram is correct. It may be questionable as to why they alternate solid and dashed lines for each stage discharge, but that can be figured out.

How will low and high pressure zones (high and low) .. form on the rotor and stator airfoils?

Pressure increases and volume decreases as air is compressed from top of the diagram to bottom. In this case, higher pressure underneath the airfoils transfers the mechanical energy of the rotor into compressing the air. Each stage compresses more and more. The stator "lines up" the airflow for another rotor pass.

Finally, the concept of "relative wind" can be reviewed for this application. With ice boats, the (side wind) pushing the boat is not the same as that (from the movement of the boat) which creates the thrust from the sail, which allows it to go much faster than the wind. The relative wind from the rotor (at thousands of rpm) would be the major vector.

It might help to draw the vectors to scale.

8
Is there a relationship between turbojet engine rpm (N1 & N2) and fuel consumption rate?
8
How is the central hub / shaft casing of a two-spool jet engine assembled?
25
What does the actual path of air within a turbojet engine look like?
7
How does the Pratt & Whitney F119 achieve its features?
7
Is this an accurate depiction of the internal shape of a turbofan engine?
10
Why do many large turbofans have a gap (of turbine blades) between the LP turbine and HP turbine?
4
What is a jet engine's fuel flow at constant IAS?
4
How is a stator like a diverging passage?
3
Why does turbofan exhaust appear to reverse direction?