How does the Urbanaero flying car move forward?

From the pictures of UrbanAero flying car: https://www.urbanaero.com/cityhawk, I can see that can achieve VTOL using the two propeller in front of and in the back of the passenger compartments. However, I am not sure how does it move forward. The propellers don't look like they would rotate, and there are exhaust ports in the back of the vehicle that suggest air would come out and push the car forward. However, this requires an impeller, not a propeller. Could anyone explain this to me? Thank you very much!

It would fly forward the same way a quadcopter does: have the aft motor controller increase current, thereby increasing aft fan lift, creating a pitching moment downward and moving the fan arcs out of planarity with the horizontal, thereby creating a thrust component. One would have to develop an anti-torque system to counter the increased torque of the rear fan, but that’s not unrealistic.

Now that being said, I agree with Ralph J’s analysis: That thing is nothing more than idiotic vaporware by some pie in the sky software geek or actual con artists looking to part you from your money. Flying cars, moisture farming, solar roadways, etc. are apparently very luring for well meaning but scientifically illiterate people who want real life to be like The Jetsons. Plenty a con man can easily take a pigeon like that for a ride…

The Urban-Air question, with provided downlink, does seem to show a viable twin rotor design that may provide a more stable flying platform than that experienced with the Avro VZ-9 Avrocar concept from 1959-1961.

Some fairly serious research was done by Avro for use as a modern US Army and Air Force transport vehicle. Although strongly contributing to "flying saucer" legend, excessive gyroscopic effects (before the age of computers) doomed the design.

It is entirely possible 2 rotors may make it much easier to fly.

The Avrocar used vectored thrust for horizontal motion. For lift, the Urbanaero is essentially a ducted Chinook helicopter. At low airspeeds, not a great deal of thrust would be needed to manuever this "air taxi". The advertisement claims variable pitch rotors. 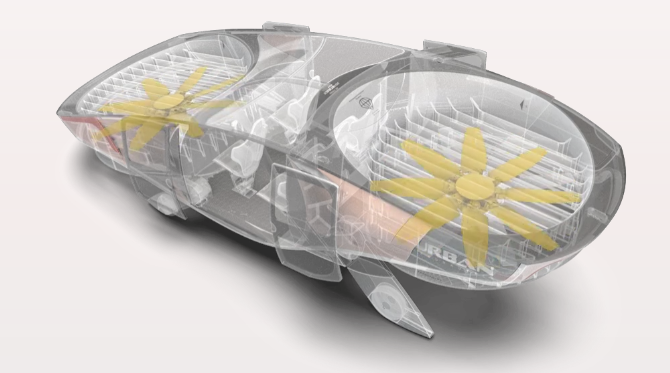 I can indeed see the two large propeller fans inside the craft, with guiding vanes to direct the exit flow left/right (cannot detect any fwd/aft adjustment). The propellers provide take-off lift, after TO the craft can be tilted forward in order to introduce a forward component of the lift vector, indeed like helicopters do. Temporarily more lift from the aft rotor, point the exhaust vanes slightly sideways to compensate for its increased torque.

Flying with the craft seems to be theoretically possible, but there are serious questions about its safety.

Yeah a flying car might one day be feasible. Even an electrically powered flying car could be done - when all the technology is matured out by experience, since flying takes place at higher altitudes than driving.

Not the answer you're looking for? Browse other questions tagged propeller vtol thrust-vectoring or ask your own question.

26
Why is *vertical* autorotation in a helicopter not recommended?

4
Why doesn't the plane accelerate/move forward when it's at rest, if the propeller is spinning?
10
Can I model propellers used in electric aircraft the same way as I model RC quadcopter drones?
3
Why do jets with 3-D thrust vectoring never hover nose up, but instead move slowly forward?
5
How will a variable pitch propeller move during takeoff?
3
Why does Harrier have split hot exhaust nozzles?
0
Why does the centrifugal twisting force move variable pitch propellers to fine?