Why does TCAS need 2 antennas?

As @Ron mentioned the fuselage is an opaque obstacle for waves, and two antennas are required to cover the whole space around the aircraft. The choice is to have one antenna at the bottom of the fuselage and another one at the top. This is similar to SSR antennas, and actually SSR and TCAS, which share the same frequencies, can use the same antennas. 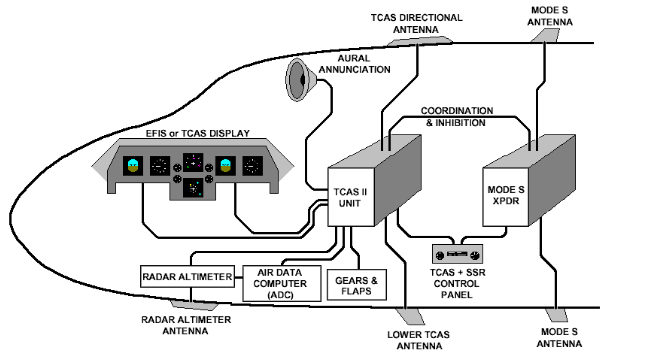 When the bottom antenna sends interrogation pulses, these pulses can be reflected on the ground before reaching the intruder transponder, this very common effect is called multipath propagation, it can lead to false tracks, due to a wrong evaluation of the distance.

In addition it illuminates a large area below the aircraft down to the ground, this can trigger a lot of replies from other transponders, particularly from dense traffic at lower altitude, even if TCAS are inhibited at low very altitudes and on the ground, because TCAS also trigger mode C and S transponders. If a large number of replies reach the antenna at the same time, synchronous garbling is possible and some replies are not processed.

The solution is to use the top antenna as much as possible for long distance detection, and limit the bottom antenna to monitor intruders at shorter distance and below the aircraft. Other intruders are monitored by the top antenna. In practice, the lower antenna power is reduced.

Different techniques are used to further limit garbling, as mentioned one is to reduce power when possible, and the protocol used by TCAS is to send pulses at low power more frequently than at hight power. This is known as the whisper-shout technique, and is also used for SSR.

However it is possible to further reduce synchronous garbling, specially at long range, by using directional interrogation pulses. While this technique is first used on the top antenna where is it most effective, it can also be used for the bottom antenna.

The top antenna is made of at least 4 individual radiators which illuminate only 90°.

These individual antennas can be used together to form a radiation pattern in a given direction. This has two interests:

See this document for more details.

Not the answer you're looking for? Browse other questions tagged transponder tcas antenna or ask your own question.

8
Does ADS-B use its own antenna?

24
How does TCAS work?
8
What is the correct procedure to deal with a TCAS RA during intercept?
9
Can TCAS be used to confirm "traffic in sight"?
1
How is the TCAS negotation information encoded?
2
What are the radio characteristics of communications between tower and aircraft?
2
Why does setting the Legacy 600's transponder to standby mode also deactivate its TCAS?
2
TCAS II - bottom omni-directional antenna
2
What RA will be generated if intruder traffic is at our level in TCAS II?
2
What type of antenna is this?
8
In what scenario would a "climb, crossing climb" or "descend, crossing descend" be issued by a TCAS system?