Why is English proficiency a “Limitation”?

I understand that being able to read, write and speak English is a requirement for an FAA Pilot Certificate. But why is that ability printed on said certificate under the “Limitations” section specifically?

Is the FAA is stating that I’m only allowed to operate an aircraft in English because they haven’t tested me in any other language? For instance, would it technically be a violation if I spoke French to Canadian ATC or Spanish to Mexican ATC?

Or is it just that there was nowhere more logical to put that text on the certificate, which they couldn’t change for some reason, and it isn’t actually any sort of limitation?

It's an endorsement not a limitation. The FAA in 2008 added the English proficiency remark to meet ICAO standards (faa.gov):

FAA Registry began issuing all new certificates with this endorsement on February 11, 2008 [emphasis mine] 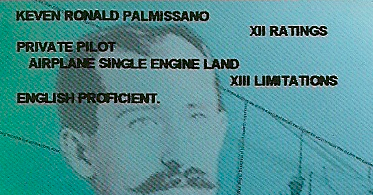 As to why it's under XIII Limitations, it's because section XIII in ICAO includes both limitations and endorsements:

XIII) Remarks, i.e. special endorsements relating to limitations and endorsements for privileges, including from 5 March 2008 an endorsement of language proficiency, and other information required in pursuance to Article 39 of the Chicago Convention;

Note: On an FAA license, only "English Proficient" is allowed, i.e. other ICAO language levels won't appear under that section:

It is an ICAO requirement for international operation:

Effective March 5, 2008, the International Civil Aviation Organization (ICAO) requires the following certificate holders who operate internationally to have a certificate stating that the holder is proficient in the use of the English language:

Not the answer you're looking for? Browse other questions tagged faa-regulations pilot-certification or ask your own question.

10
Why do multi-engine privileges not propagate down to single-engine?
12
Why does the ACS forbid activation of the stall warning during slow flight?
3
Does an AQP line check conducted by a part 121 carrier count as a flight review and instrument proficiency check for part 91 operations?
4
What portion of an Instrument Proficiency Check must be in the airplane?
2
Why are some ATP CTP providers not on the FAA's approved list?
2
Why does a sport certificate have no distance restriction while recreational does?
1
Why are some cardiac conditions disqualifying even if asymptomatic and corrected?
1
Could a controller or airport in the US decide to use English-style landing clearances?
12
Why does the FAA require special authorization to act as PIC in the North American T-28 Trojan?
5
Why require a minimum of 1500 hours to become an airline pilot?