Why does a rocket engine increase power with speed if the burn rate is constant?

A rocket produces constant thrust with speed, and that means increasing power with speed.

Where does this increase in power come from if the fuel burn rate is constant? How can we explain this in the reference frame of the rocket without violating the laws of physics?

Does a turbo fan and turbo jet also produce constant thrust with speed?

Put simply, the variation in power is due to the distinction between the exhaust jet power and mechanical power added to the vehicle. The power of the exhaust gas stream measured in the rocket-fixed reference frame is only dependent on the rate of energy release by the propellant. The rate of kinetic energy addition to the vehicle depends on the thrust developed by the engine and the velocity of the vehicle measured in some other reference frame.

These two powers will only match momentarily when the vehicle velocity equals the exhaust velocity (when the exhaust is left at rest).

Here is a plot of total system energy for a rocket of mass ratio 5 accelerating from rest. The kinetic energies of the rocket structure, onboard propellant, and exhaust gases as well as the internal (chemical) energy of the propellant are shown, just to demonstrate the total remains constant regardless of how much fuel has been burned. 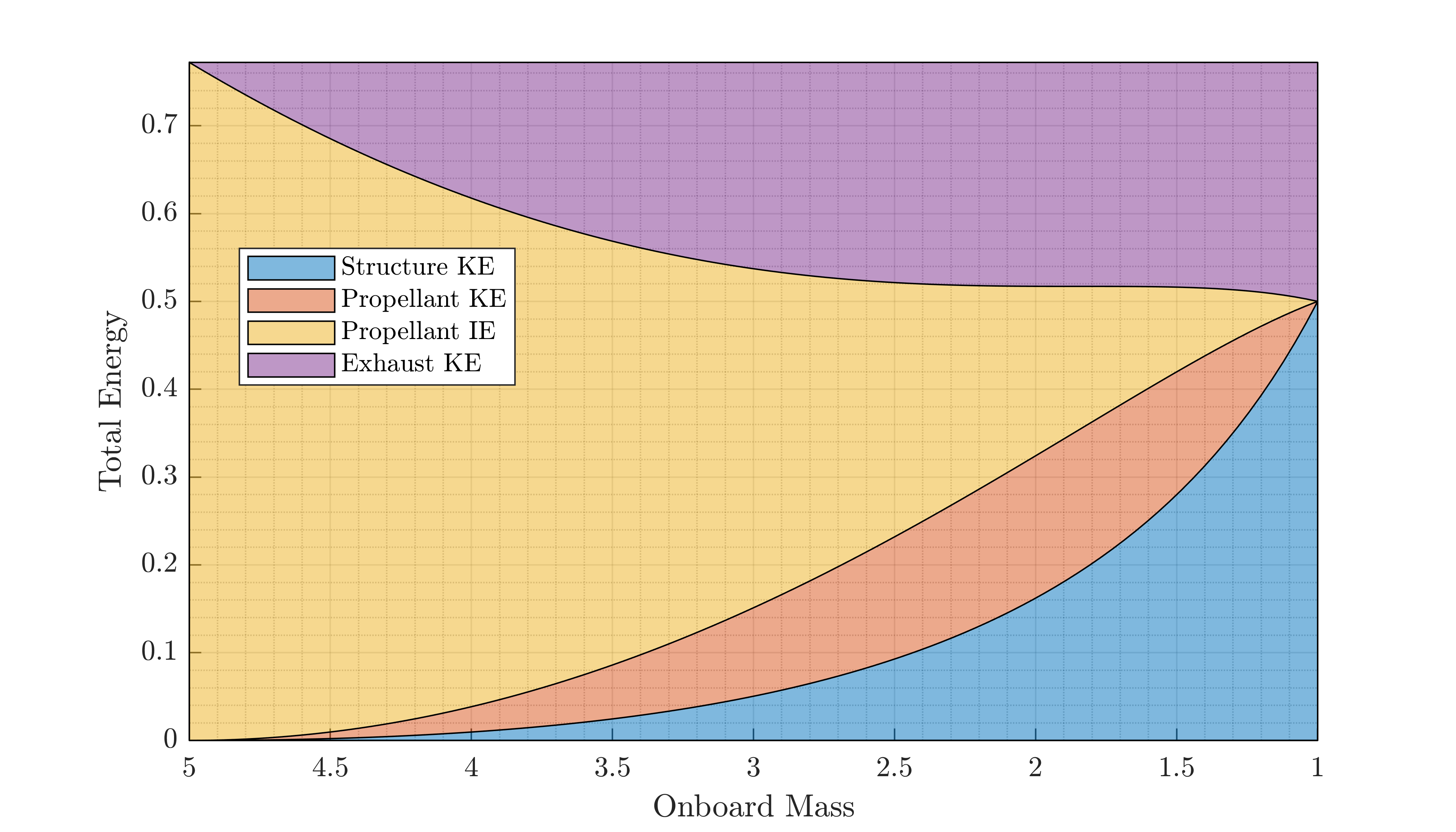 We must remember these definitions were created for draft horses before the age where aerodynamic drag was significant.

"Power" more accurately describes the Energy state of an object.

In a vacuum, away from a gravitational field, a rocket under constant thrust force will have more and more power (as an impactor) as its speed increases.

A turbofan and turbojet, operating in the atmosphere, are limited in the amount of thrust they produce by oxygen available and limited in velocity by drag. In extreme cases (such as hypersonic flight), friction heating from drag also plays a significant role.

"Power" vs drag graphs are popular for aviation training programs, but can be confusing unless Power = Thrust x Velocity is applied.

Thrust is an easier way to quantify engine output. Even for propeller driven aircraft, "horsepower" can be described as torque at a given rpm.

If you limit "power" to mean the change in energy over time of the vehicle + unburned fuel, then yes, that's correct.

Where this increase in power come from if fuel burn rate is constant,how explain this in reference frame of rocket without violate physics laws?

It comes from only looking at part of what the engine is doing. The other change the engine makes is a change in energy of the fuel/exhaust.

At the first instant that the engine is running (when the rocket is still stationary), 100% of the combustive power of the engine goes into accelerating the fuel into exhaust. The power going into the vehicle is zero, but the engine is still doing something.

If we assume the engine is running with nearly constant fuel flow, then we would see at any instant

That's a useful approximation over a large range of operating conditions. But unlike a rocket, airplanes have increasing drag forces as they accelerate. This limits the top speed and the acceleration possible. Since most airplanes fly with a cruise (non-accelerating) portion dominating, the idea of how the KE of the airframe changes over time is much less interesting.

Not the answer you're looking for? Browse other questions tagged jet-engine propulsion rocket or ask your own question.

17
Why is max endurance different for jet and props?
1
Would "wind turbine generators" in the bypass stream save fuel for jetliners?
2
Has a jet "engine" ever been made that only uses the thrust from the bypass air and doesn't have a combustion chamber?
12
How (and why) does engine thrust change with airspeed?
1
How do you maximize an electric engine's thrust?
4
Does the P&W F100 turbofan engine of the F-16 really produce this much power?
3
How does the power distribution change for a turbofan engine from being stationary to going at full speed?
5
Why is thrust said to be constant over speed for a jet engine?