How does a fuel density sensor work? (densitometer, cadensicon)

While some fuel volume sensors use ultrasonic measurements this answer to How is fuel mass measured in airliners? says:

The FCOM lists the sensors involved in this measurement:

Using the densitometer (or the backup CIC), the conversion from volume to mass is performed by the FQIC. The ECAM can then display fuel temperature and mass as calculated by the FQIC.

So in this case capacitive sensors (plus fixed tank shape) can determine the fuel volume, and a density measurement can convert that to a mass.

Question: How does a fuel density sensor work, being the "densitometer" or "cadensicon" mentioned in the block quote.

I don't know what exact kind they are using in the A320 (from which the quote in the question is). @mins found a forum post about an Airbus A300-600 cadensicon:

Unfortunately, that source does not describe how the density is measured.

However, I found a densitometer that is used for aviation fuel density measurements. It measures the change in resonance frequency of a spring, which is driven by a piezo. That frequency change depends on the fluid density, which allows calculating the density from the measured frequency and known calibration coefficients: 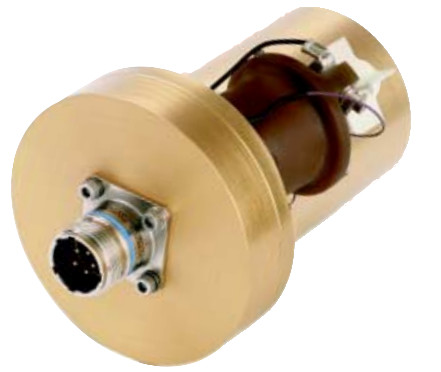 The densitometer uses a torsional mode natural frequency to determine density in real time, providing an accurate and reliable indication of fuel density over the temperature ranges typically encountered in aircraft fuel tank applications. It is designed to operate in all aircraft fuels encountered worldwide.

The primary output is an AC voltage having a frequency that varies with density. Density is calculated from the output frequency via the equation: $ \rho = a + b / \text{frequency}^2 $, where a and b are constants determined during calibration. The standard method of acquiring the frequency in a microprocessor based system is with a timer/counter chip having a two-second gate time insuring high resolution.

The two cadensicons used on A320 are float type, density is determined by measuring Archimedes force (buoyancy). A float is maintained by springs and the force on the springs is measured.

Volume is constant, gravity field is assumed constant, leaving only a dependency on density.

A cadensicon, or capacitive density condensator, is a densitometer with a measure of fuel permittivity (dielectric constant), to calibrate the capacitive probes.

From Airbus technical training manual for A320 fuel system:

Each cadensicon houses 2 sensors covered by fuel. A fixed capacitor covered by fuel is the primary source for dielectric constant of the fuel in each tank and a densitometer float measures fuel density. Both parameters are used for calculations of the fuel quantity. As density of the fuel grade in use changes with temperature, a fuel thermistor makes an allowance for temperature variations.

A partially immersed probe can be seen as the sum of two variables capacitors with different dielectrics (air and fuel) and which total capacity is a function of fuel level. Each tank has a probe fitted with a capacitance index compensator, which measures fuel permittivity at the bottom of the tank.

A320 fuel level probes, from Airbus A320 documentation

The location of the probes is chosen to ensure at least one probe cuts the fuel level in any aircraft attitude.

The FQI has two channels, one working to compute the mass, the other to monitor the first one. Mass is computed from the levels sensed by capacitive probes and:

The conversion of levels to volume takes into account the attitude determined using the probes and a table in the computer memory containing the geometry of the tanks.

Not the answer you're looking for? Browse other questions tagged fuel fuel-systems fuel-tanks sensors or ask your own question.

16
How is fuel mass measured in airliners?
11
Which amount of fuel is important - mass or volume?
6
What types of fuel quantity sensors are used in an aircraft? How do they work?

9
How does fuel get to the engine during acrobatics?
7
How does the MiG-23 fuel system work?
3
How does this fuel pump work?
1
What is a fuel tank float valve and how does it work?
40
Is fuel moved around during flight on a passenger or cargo plane? If so why?
6
What types of fuel quantity sensors are used in an aircraft? How do they work?
11
Is there any work on improving fuel tanks so they could store hydrogen?
10
Why would the outer tanks fuel on the A320 be colder than the inner tanks?
0
What extra components does a fuel tank have?