I am perplexed on the dynamics of the forward slip. I am illustrating here: 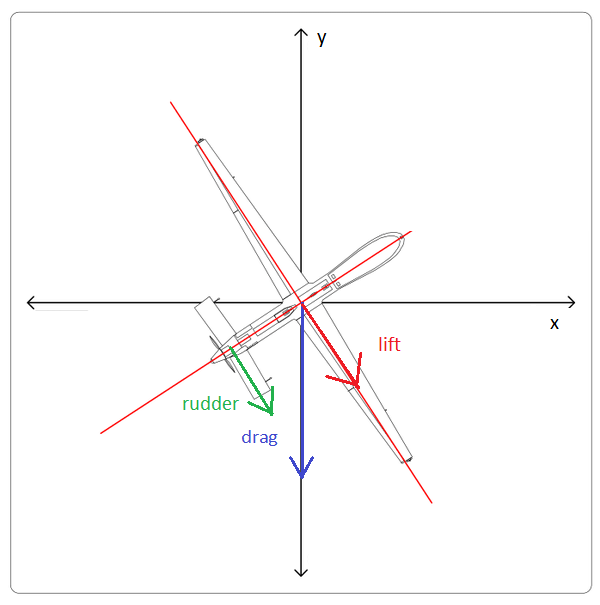 The intended ground flight path is axis +y, and the plane is forward slipping by banking right + left rudder.

In order to keep being on the intended path, forces on x should add up to zero. However, the lift has a component to the right side (+x). I don't understand how the rudder is able to counteract this. The lift can be modeled as a linear force, thus acting on the plane's center of mass; instead, the rudder provides a torque that can change future geometry, but certainly not provide a linear force. What am I missing?

You are confusing some of the directions. For a forward slip in the +y direction, you have to bank left. The lift and rudder vector should both point in the opposite direction.

That would still leave a sideways component. However, the airframe will also generate some sideways lift! In fact, that is exactly the reason why you have to make some bank angle at all; if the airframe only resulted in drag, you could perform a forward slip wings level.

Think it through in steps.

When, say, right rudder is applied just wings level, what has happened is that the camber of the fin/rudder has increased and its chord line offset to the left, imparting a yaw torque that yaws the body until a new equilibrium is reached.

The angle of the fuselage to the airflow, that its static stability force wants to seek, its weathervaning trim angle you could say, is offset to the right. The airplane yaws right and stabilizes at a new yaw trim angle of attack as long as the rudder is held. It's as if you bent the trailing edge of a barn weathervane and it now points into wind but with an offset.

At that new trim angle, the fuselage is operating at a lateral angle of attack, and the thrust line is also offset in the same direction. The plane starts a flat turn from the lateral fuselage lift and offset thrust line (if there is power on). So I'm in a wings level skidding turn in the direction of the rudder application.

When I lower the wing the opposite direction, I introduce side slip forces that oppose the lateral forces induced by the yaw's lateral lift. At the right bank angle, the magnitude of the side slip forces precisely cancel out the lateral yaw and thrust (if there is any power on) forces, the net result on the body's mass is neutral, no turning occurs, and you are in a forward slip.

First, we must realize the purpose of a forward slip is to increase drag, which allows the aircraft a greater angle of descent for a given airspeed.

This manuever serves the same purpose as dropping flaps to increase drag.

Importantly, ailerons are used to control lateral track, using the "slip" to counteract the tendency of the aircraft to fly in the direction it is pointed.

It is the horizontal component of lift, created by controlling bank angle with ailerons, that offsets forces in the opposite direction.

Because your aircraft has right rudder in, you must slip to the left. The wing lift vector in the diagram, therefor, needs to be pointing in the opposite direction.

So, the change in relative wind when right rudder is applied stops the right yaw and tries to push the entire plane to the right. The left force provided by the horizontal component of lift compensates for this.

Notice the wing is also pulling the plane in the y direction, but in a very draggy way. Thus, the aircraft is (deliberately) uncoordinated.

Not the answer you're looking for? Browse other questions tagged flight-controls maneuver sideslip or ask your own question.

15
What is the difference between a forward slip and a side slip?

3
In a non-symmetric turn, how do the side slip angle and thrust side slip angle affect the equations of motion?
6
Do aerodynamic forces and moments change aircraft pitch and yaw in the same way?
15
What is the difference between a forward slip and a side slip?
1
At what angle-of-attack (sideslip angle) would a symmetric vertical fin plus a deflected rudder have a lift coefficient of exactly zero?
1
Mushing glide vs forward slip sink rate
15
How controllable is the 737 in single-engine manual-reversion flight? Is it controllably landable (or go-around-able) in this condition?
6
Is a forward slip considered a "normal maneuver" under 91.175(c)(1)?