How is fuel mass measured in airliners?

Large airliners display the amount of fuel in each tank as a mass (usually in kg or lbs) and not as a volume. This makes sense since mass is important for weight&balance considerations and the fuel mass is proportional to the amount of available energy.

Based on a discussion in the comments under this answer, I am wondering: how is the fuel mass measured?

On the Airbus A320 family, the fuel volume is measured via capacitance probes and then converted to mass by also measuring the fuel density:

The FQI [Fuel Quantity Indication] system calculates the fuel quantity based on values taken from probes in the tanks. The probes measure the level of the fuel in the tank, as a consequence of changing capacitance due to the amount the probe is immersed. This allows the determination of the fuel volume in the tank.

Yet the information that is needed by pilots is the quantity of fuel on board expressed as a weight. The translation of fuel volume into fuel weight is performed by the FQIC using the fuel density measured by specific devices in each wing tank [...]

The FCOM lists the sensors involved in this measurement:

Using the densitometer (or the backup CIC), the conversion from volume to mass is performed by the FQIC. The ECAM can then display fuel temperature and mass as calculated by the FQIC.

Additionally, there is an independent system sensing low fuel level, which would alert the pilots even if something goes wrong with the normal FQIS:

In addition to the sensors and probes feeding the FQI system, each wing tank is equipped with three independent dedicated low level sensors. These sensors are located in such a way that they become dry when the remaining fuel in the tank is approximately 750 kg. If two sensors in the same tank remain dry for more than 30 seconds, a low level alert triggers in the cockpit (fig.2).

The low level sensors are fully independent from the Fuel Quantity Indication, and are different in that they:

The 737 is the same as the A320 in principle (sensing filled volume then converting to kg or lbs for the crew).

From a 737 maintenance training manual:

Tank Units are hollow coaxial cylindrical capacitors mounted vertically to ribs inside each fuel tank. Fuel is used as the dielectric. The inner tube is profiled to correspond to the irregular shape of the inside of the fuel tank. The tank units are located throughout the tanks so an accurate reading is provided whatever the attitude of the airplane.

Here's an FAA drawing for such unit: 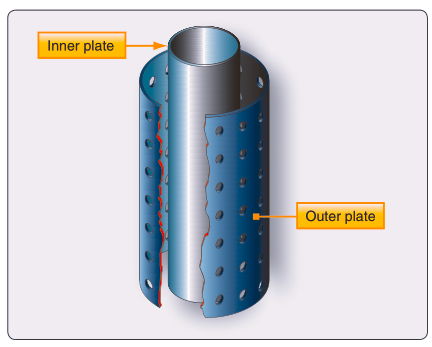 And indeed this sensor would be affected by temperature as Ralph has noticed, but it has nothing to do with directly sensing the mass or weight:

The use of tank unit capacitors, a reference capacitor, and a microchip bridge circuit in the fuel quantity indicators is complicated by the fact that temperature affects the dielectric constant of the fuel. [FAA; emphasis mine]

Not the answer you're looking for? Browse other questions tagged airliner fuel-systems sensors or ask your own question.

11
Which amount of fuel is important - mass or volume?
6
What types of fuel quantity sensors are used in an aircraft? How do they work?
6
How does a fuel density sensor work? (densitometer, cadensicon)
4
On what basis is the weight unit of the FQIS selected by airlines of various countries?

9
How is taxi speed measured?
53
Why do many GA aircraft not have a "Both" fuel selector?
5
How are pitch angle and pitch rate measured in an airplane?
16
Do modern airliners have oxygen sensors in the cabin?
7
Why do aircraft stall warning systems use angle-of-attack vanes rather than detecting airflow separation directly?
9
How is the fuel quality monitored/assured for jetliners?
0
How should fuel go through pumps?
6
How does a fuel density sensor work? (densitometer, cadensicon)