Why does EGPWS use a database rather than just using a built-in forward-looking radar system?

EGPWS is a development of GPWS that uses a database together with the plane's GPS location to create a virtual map of the area around the airplane, allowing it to "see" the ground ahead of it instead of just below it. However, the result is occasionally not accurate since the database of course isn't perfect. What I'm curious about is this: why couldn't airplanes just use a forward-looking radar instead?

By the way, I already know about line-of-sight and how radars can't see what's behind an obstacle, but I would think that the highest ground the radar picks up in front of it would be the practical highest point of the terrain around the plane, since if it continues climbing at the same rate after passing above the obstacle in front of it, I would expect it to also clear any higher ground beyond it that went undetected by the radar.

Forward-looking sensors provide better accuracy, but that's only beneficial to military airplanes that rely on terrain-following for deep penetration missions. Civil planes don't need such accuracy because they shouldn't get that close to terrain.

And while yes line-of-sight is typically a none issue, this only applies to what's ahead. That radar can't see what's say 90° to the right when a turn is executed to the right; an EGPWS database will already paint the navigation display with such terrain.

Both systems can be blended, but for civil planes, it's an extra cost that is not needed because getting that close to terrain is out of the question. There are also export restrictions with terrain sensing systems – which for example shelved a synthetic-aperture radar landing system that had interest from civil operators in the mid-90s, because an advanced system that is designed to ignore wrong reflections from buildings and vegetation, could be adapted into an adversary's air force (planes and cruise missiles).

➤ Assuming a basic system to avoid export-embargoes, and a low-gain to avoid false-positives, then it will not be better than a database-based system (and will be worse for terrain that surrounds a plane; the big turn example). That's the same issue with radar-altimeter (RA) GPWS:

These systems [meaning RA-based] are also subject to high false alarm rates, particularly when landing approaches occur over rugged terrain. High false alarm rates hinder pilot acceptance and trust of such systems and can cause valid warnings to go unheeded.

All those options were looked into. Here's a visual summary of the systems from one of those studies, with the forward-looking element being optional: 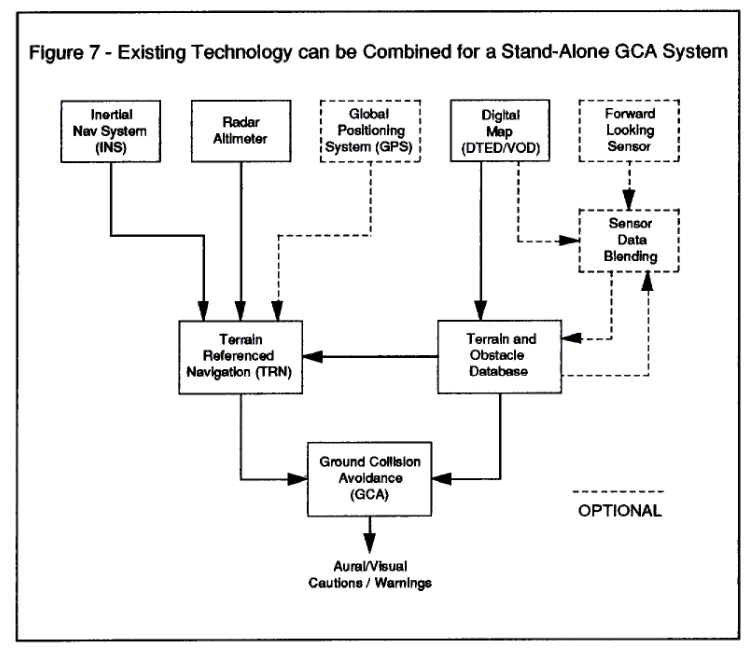 The reason is weight, electrical requirements and cost. A ground scanning radar is a large, heavy, (very) expensive and power hungry piece of equipment. Very few GA airplanes would be able to carry one, and those couldn't without modifications that would cost more than the value of the airplane.

Or you can have a memory card which costs about $20 and weighs a few grams. The problems with inaccuracies often stem from people not updating their databases, with regular updates inaccuracies are relatively rare.

Not the answer you're looking for? Browse other questions tagged gpws or ask your own question.