In what scenario would a "climb, crossing climb" or "descend, crossing descend" be issued by a TCAS system?

FlightGear's (sim) wiki page gives an example of such a command for where the an aircraft at a lower altitude is already is climbing, and/or the aircraft at a higher altitude already is descending. But I struggle fully understand this example, wouldn't the TCAS simply issue a climb command for the descending and a descend command for the climbing as the safer option (granted - there will be inertia lags with the heavy jets). Or rather issue an "INCREASE DESCEND, INCREASE DESCEND" / "INCREASE CLIMB, INCREASE CLIMB." Furthermore, how can the TCAS system presume that descending/climbing aircraft will maintain its rate of descent/climb?

When a TCAS RA is issued, the system first selects the sense (up or down) and then the required strength. During the sense decision, an altitude crossing is avoided if the required vertical separation is sufficient:

The first step is to select the sense (upward or downward avoidance) of the RA. Using the results of the vertical and horizontal tracking, the logic models the intruder’s path to the CPA. [...] The CAS logic computes the predicted vertical separation for each of the two cases and normally selects the sense, which provides the greater vertical distance.

In the cases where an altitude crossing is projected before the CPA, the CAS logic will pick the sense that avoids crossing, provided that the resulting vertical distance at CPA is sufficient.

Figure 19 illustrates this case. The desired amount of vertical safe distance (ALIM), varies from 300 to 700 feet, depending on own aircraft’s altitude regime. If ALIM cannot be achieved, a crossing RA will be issued (see Figure 20). However, delaying mechanisms aim at reducing the incidence of crossing RAs by deferring an altitude crossing advisory if:

A resolution advisory is altitude crossing if own ACAS aircraft is currently at least 100 feet below or above the threat aircraft for upward or downward sense advisories, respectively.

Furthermore, how can the TCAS system presume that descending/climbing aircraft will maintain its rate of descent/climb?

For crossing RAs, this can however result in a situation, where the other aircraft maneuvers such that the vertical separation is reduced. This will then trigger a modified RA:

During the course of the encounter, the RA strength is evaluated every second. Occasionally, the threat aircraft will manoeuvre vertically in a manner that thwarts the effectiveness of the issued RA. In these cases, the initial RA will be modified to either increase the strength or reverse the sense of the initial RA (when the initially issued RA is no longer predicted to provide sufficient vertical spacing).

[...] Figure 23 shows an encounter where an initial Climb RA requires reversal to a Descend RA after the threat aircraft manoeuvres. 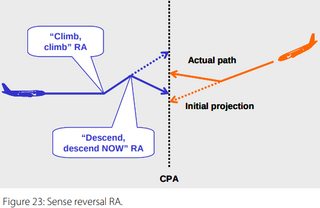 10
Would TCAS ever issue a "climb, climb!" RA that would stall a jet with a low airspeed?
8
What is the correct procedure to deal with a TCAS RA during intercept?
12
When receiving a TCAS RA, DESCEND DESCEND, and starting the descent, if a pilot received GPWS warning, TERRAIN, what would they do?
4
What is the need for TCAS?
12
What is the range of TCAS?
8
Why does TCAS not issue turning commands as Resolution Advisory?
8
What is the climb/descent rate that triggers the TCAS up/down arrow?
0
If all aircraft were TCAS-equipped, how would this change ATC routines?
2
What RA will be generated if intruder traffic is at our level in TCAS II?
3
How does the TCAS decide which aircraft to climb and which to descend