Is there a place where altitude while flying is negative?

There are quite a few airports near sea level since many larger cities are located near the sea. There are even some airports below sea level. Amsterdam Schiphol is somewhat famous for it (at least where I live), even though its official aerodrome elevation is only -11 ft or -3 m.

According to Wikipedia's list of lowest airports, the lowest elevation airport is Bar Yehuda Airfield in Israel at -1,240 ft or -378 m. Here is a screenshot from this YouTube video flying at -400 ft pattern altitude before landing at Bar Yehuda: 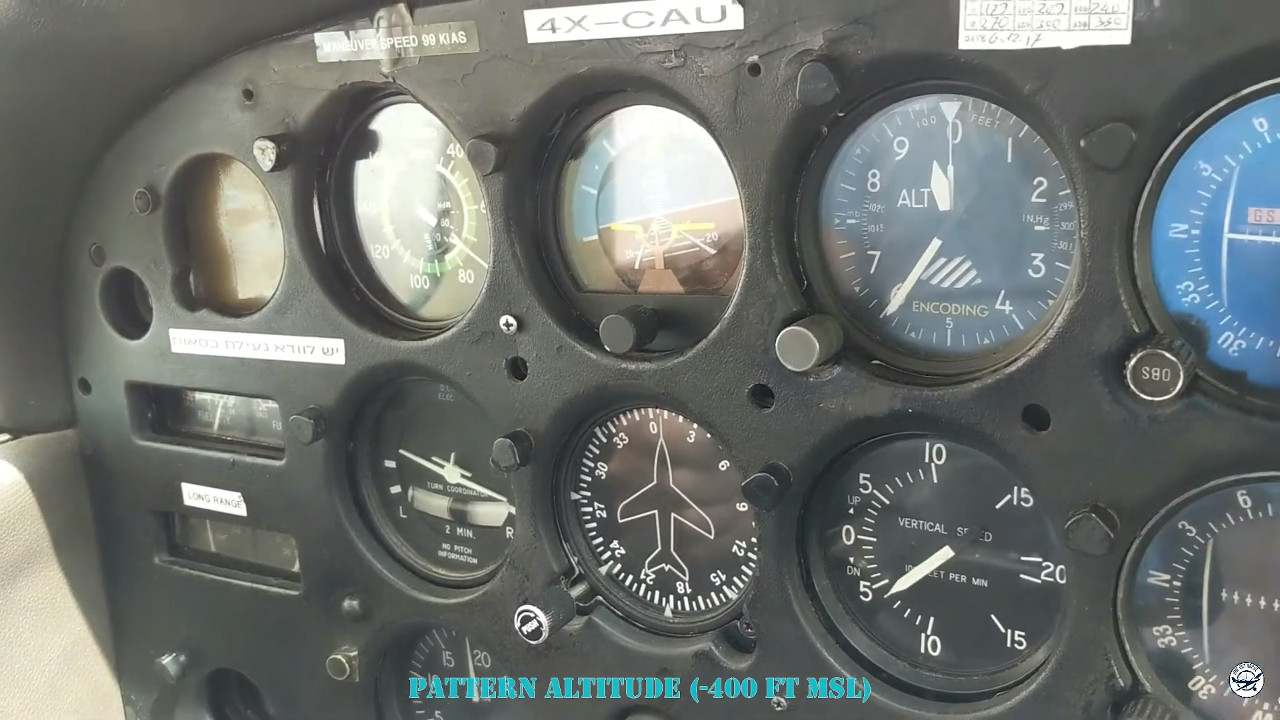 If you just wanted to know some places below sea level then there are plenty of related collections for places and airports and there is little interest to copy them here. But actually your question is not about such lists but whether an altimeter can show a negative altitude when used...

... the surprising answer is a barometric altimeter can display a negative value at any time and at any place (within technical limits) depending on its setting, not only at places below sea level.

A common altimeter, as one used in aircraft since the first years of aviation and still used today, is a misnomer, it doesn't measure altitude, it measures atmospheric pressure. 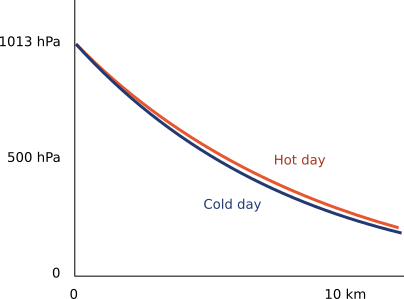 The ft dial is an overwritten hPa dial. To be fair, this scale is not an altitude scale, but a pressure-altitude scale. This accurate wording, which belongs to meteorology, is seldom used, only when someone wants to remind on how some altitude value is obtained. The actual altitude is the geometric altitude, usually determined using a satellite navigation system. Barometric altimeters were the only airborne solution to estimate altitude before inertial platform development.

An altimeter referenced to QFE displays height above the reference point

Reference pressures (QNE, QFE, QNH) are referred to using their letters in Q code, a system of pre-formatted questions/answers used in marine and aviation before radiotelegraphy was replaced by voice communications.

In the past it was common to use the airfield pressure, QFE, as the reference. When set this way the altimeter simply displays the height above the airfield.

Using an altiport QFE naturally leads to negative values displayed when flying below the altiport, or more accurately when flying at a location which pressure is higher than QFE. This method is not recommended today, but is still used, and is for example common to fly airfield circuits in UK.

Usually crews are not really interested in knowing their exact altitude in cruise, they have no problem in following routes at constant atmospheric pressure, with the altimeter needles frozen at some value, while their geometric altitude actually varies.

Determining and using the QNH at some location for some time

When crews operate close to the ground, they need a better altitude accuracy to navigate and prevent collisions with obstacles. A correction is applied to the model by introducing the local conditions.

This correction consists in retro-computing the pressure at sea level, given the current pressure tendency observed at the airfield. This new sea-level pressure is known as QNH. Telegraphists using the Q code would have transmitted "QNH 1021 1000Z", this would have meant exactly: "If you set the sub-scale of your altimetre to read 1021 hPa, the instrument would indicate your elevation if you were on the ground at my station at 10:00 hours".

Aviation also used in the past a more complete correction including temperature and relative humidity in the calculation. It was known as QFF, but has been replaced by the more simple QNH.

When about to land, the crew gets the airport QNH value from ATC or ATIS broadcast and sets the altimeter reference to this value. If things are done properly, when the aircraft lands its altimeter indicates approximately the airport altitude.

Now as visible in the picture above, any location below the dotted blue line (QNH surface) will be associated with a negative altitude, e.g. when flying close to the terrain on the right side.

Altitude is accurate only in the area where QNH is computed

As the crew sets the altimeter reference to the QNH, they actually redefine the isobaric surface corresponding to sea-level and thus determine a volume with negative altitudes. As the QNH is dependent on the current local weather, this volume also depends on the local weather.

The existence of areas of negative pressure, and more generally areas of inaccurate pressure is due to the fact a QNH setting is valid only in the area it was computed for. If we were to land on an airport on the right side, we would get the QNH computed by this airport for its own area. This QNH would be a higher value, and the corresponding dotted blue line would be lower than the one shown. The runway altitude would be correct with this setting, but would now be wrong for the airfield on the left side.

A negative altitude is just a matter of altimeter setting, and can be observed at any time you fly with a reference which doesn't corresponds to the local QNH. For this reason aircraft below a certain altitude are legally required to use a local QNH, obtained from a local airfield (e.g. in a radius of 100 nm in Australia), or at least an area/regional QNH, which is an approximation for some large area.

But there is an exception: Some altimeters are never set to the local QNH.

Using QNE instead of QNH to report altitude

Transponders modes C/S and ADS-B also include a barometric altimeter which is permanently set to the mean pressure at sea level, 1013.25 hPa. There is a corresponding Q code entry, QNE. Let's recap:

This QNE-referenced altitude can be negative from time to time when flying at low altitude in high atmospheric pressure. However it is corrected by the radar system before being displayed to ATC operators, by the value of the local QNH (thanks to @JanHudec for clarifying this).

But personal Mode S and ADS-B receivers do not perform this correction by default, as the QNH value is not known.

Rennes St Jacques (LFRN) is an airport near the English Channel, in France, its altitude is 124 ft. In the theoretical model 124 ft is 5 hPa. When airport pressure is 1018.25, its retro-computed QNH is 1013.25, and equal to QNE. In these conditions, a mode S transponder, which is permanently set to QNE, reports the same altitude than the one shown on cockpit altimeters set to the current QNH.

From time to time, this area is subject to extreme anticyclonic conditions with the airport pressure higher than the theoretical model, e.g. 1047 hPa. The retro-computed QNH is 1042 hPa. The difference with the standard atmosphere is now 28.75 hPa. This corresponds to -776 ft.

When reaching the runway which is at the altitude of 124 ft, the reported altitude will be -776 + 124 = -652 ft. This is what the user of a receiver not performing the QNH correction will see: 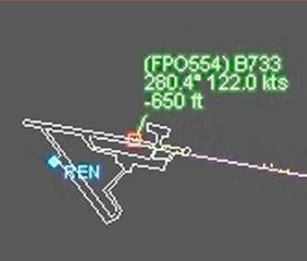 Determining a geometric altitude, that is the distance to mean sea level is actually a very difficult operation, because the sea level (the level after tide variations have been removed) is itself a complex notion. To start with seas and oceans are not all comparable, and in the past different MSL were used locally. In addition currents and local variation of the gravity interfere with the mean sea level. Hopefully these many difficulties had to be solved to build global navigation systems, and this knowledge has been integrated into the systems.

GNSS satellites data are relative to the perfect WGS 84 ellipsoid (GRS 80) representing oblate Earth. MSL on the other hand is represented by the WGS 84 geoid (based on the gravimetric model EGM 96).

The ellipsoid and the gravity model have been defined after conducting a lot of studies and measurement campaigns involving expensive means. The hard work was done and will be updated periodically, data can be used to determine geometric altitude in a split second at virtually no cost for the GNSS user. 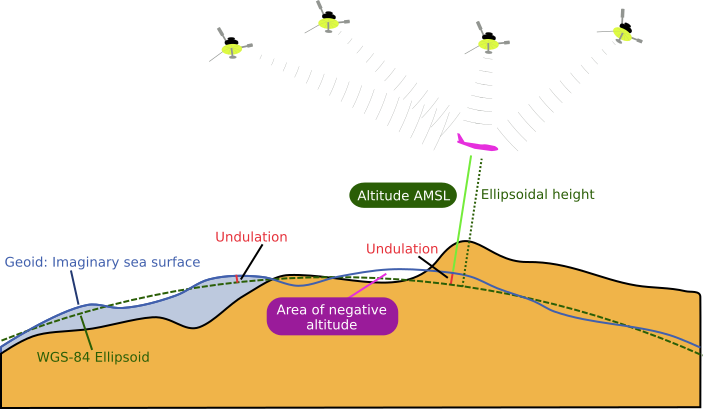 Why is that so difficult to deal with altitude in aviation

The difficulty to understand such foggy concepts is we first assume the altimeter measures an altitude, while a barometric altimeter actually measures atmospheric pressure and shows it on a dial marked with altitudes obtained according to a theoretical model which is rarely met in real life. Setting a reference is just a way to try to make the model more relevant to the current local situation.

Aviation encounters difficulties to switch from a century old technology, which today causes a lot of problems, to the cheaper and more accurate modern technology which would solve them. This is true for altimeters and air traffic management in general. Hopefully aviation will overcome these challenges.

There are several regions where you could (at least in theory) fly below sea level. For example, in the Dead Sea depression, that is the lowest stretch of land on the planet, reaching a maximum depth of roughly 400 meters below (geoid) mean sea level.

For here in the US, I give you Furnace Creek Airport at an altitude of -210 feet. https://www.nps.gov/deva/planyourvisit/airports.htm The pattern altitude is +789 MSL but you'll be lower on final approach. Late goaround should make for some interesting instrument readings.

I recall reading about a case where the avionics was coded for Furnace Creek being the lowest possible airport and glitched out over the Dead Sea. :( EDIT: answer link https://aviation.stackexchange.com/a/56896/5711

Remember that the altimeter simply shows your "altitude" as a relative reference to the pressure at a known point. We generally use sea level, though it can also be set to reference ground level (again, at a known point). This is commonly used in the UK, known as the QFE, where the pilot will dial in the air pressure at an aerodrome.

So in that sense, yes, your altimeter could show a negative value if you fly below your reference point. I.e., below sea level or below whatever ground level you dialed in.

Not the answer you're looking for? Browse other questions tagged altitude altimeter or ask your own question.

30
Why is 0 ft a valid target altitude for an autopilot?
9
When is QFE used?

8
How will flying through mountains cause altimeter problems?
7
How does ATC maintain separation between aircraft flying at different speeds?
9
How can true altitude be calculated from pressure altitude, temperature and altimeter setting?
3
What is wrong about this interpretation of QFE and QNH?
17
Which source to use when reporting the current altitude to ATC?
5
How do pattern and overflight altitudes work for airports underneath Class C airspace?
5
Why, and how, are barometric altimeters accurate enough for approach and landing?
3
Is the transition altitude around Denali still 18 kft AMSL, and, if so, how is this handled?
7
Can climbing above RVSM airspace cause temporary loss of separation with an aircraft in RVSM airspace?
6
How to most likely get a flight that will go above 40,000 ft?