Why do digital flight instruments seem to fluctuate/flicker during landing or takeoff?

I happened to watched videos where landing was aborted due to some or other reasons.

However, something interesting stuck me eyes: the digital flight instruments fluctuate/flicker (such as the attitude indicator) and can be easily noticed apart from the usual flight routine.

The reason you see this is two-fold:

It may be surprising, but this effect is the result of not fulfilling the first principle of sampling, known as the Nyquist criterion, sampling must done at a frequency at least twice the largest frequency contained in the signal to sample. This can be illustrated like this:

This is an artifact known as stroboscopic effect. It appears when the real world is sampled (temporal sampling) and we look at the succession of samples. Instead of viewing the continuously changing real world we see a sequence of fixed states. This has two effects:

Stroboscopic effect is one of the many form of aliasing. Aliasing refers to an artifact created when rebuilding an object from samples that not in adequate amount to get a faithful copy. In technical term this means the original object was sub-sampled given it's complexity. This relates in fine to the Nyquist criteria: If a signal contains frequencies up to f, then it mustn't be sampled at a frequency lower than 2*f.

In the effect you see there are two reasons: The way a CRT shows images (actually bands on the screen) and the way the camera captures (samples) images. The effect is the combination of the two.

Image creation on the CRT/LCD screen

In a CRT screen, the image is built by energizing phosphor material on the screen surface, using a small electronic beam, line by line from left to right and top to bottom. As phosphor luminosity cannot be maintained a long time, the screen must be continuously scanned by the beam at some frequency, usually 50 or 60 Hz, but today it's often at a higher frequency.

At a given time, the most bright lines of the screen are the one currently refreshed, and a few lines which were refreshed immediately before, which number depends on the persistence of the phosphor used. This creates a brighter band visible when frozen by photography.

Passive LCD screens are similar: A passive LCD cell (pixel) is made transparent by storing electrons in a tiny capacitor which is unable to keep it's charge a long time, so this capacitor must be reloaded periodically. This is also done line by line, and also create areas of different brightness at a given time.

A human eye also shows a persistence of vision. When our eye sees a bright point, the stimuli is maintained after the point has disappeared. This is why we can see a photographic flash which actually lasts less than a millisecond. For most people, there is no flickering after 40 Hz. The refresh rate of the CRT was chosen in order to take advantage of this persistence. The electricity network frequency (50/60 Hz) was used as this provided a stable clocking reference.

Does that mean we need to send 50 (60) images to the CRT each second? Actually this would have been too much for the radio transmission associated with TV broadcast, and only 25 (30) images were sent each second, first all odd lines, then all even lines. The CRT actually displays the two interleaved halves of an image each 1/25 s. This apparent frequency of 50 Hz is enough to prevent flickering for humans.

Stroboscopic effect from the camera

So a flickering actually happens on any CRT, but we can't see it with naked eyes. However, a video camera actually samples the reality to create, say 25 fixed images per second.

But what do we see on these images: Bands! The location of the bands on the fixed images varies from one image to the next, like in any stroboscopic sampling:

This is the main reason for flickering screen on video recordings: The illuminated portion of the screen varies during the recording, it seems the screen is flickering (while it's actually never totally black).

Now imagine a case where the camera scans exactly the same number of images than the CRT, but is not in-phase, that is the camera doesn't scan the line being refreshed by the CRT, and it happens the camera scans a line where phosphors have already lost their luminosity:

In such a configuration when the camera scans the next line, another line has returned to black, maintaining the same black gap between camera line and first illuminated line on the CRT. In such a configuration the camera would never be able to record a line, creating black images. As the camera and the CRT are not synchronized this happens only from time to time. In between partial images of some random sort are recorded.

There are ways to remove partially this effect, like temporal anti-aliasing which consists in blending several images together. This way bands at different positions appear on the same image, though it's difficult to equalize luminosity over the synthetic image created.

Other stroboscopic effects due to a camera

As the camera also scans the sensor matrix receiving the image line by line, lines recorded actually belong to different instants. Lines can't match if the objet moved during the assembly of image lines. Because of this a fast moving propeller can appear completely bent: 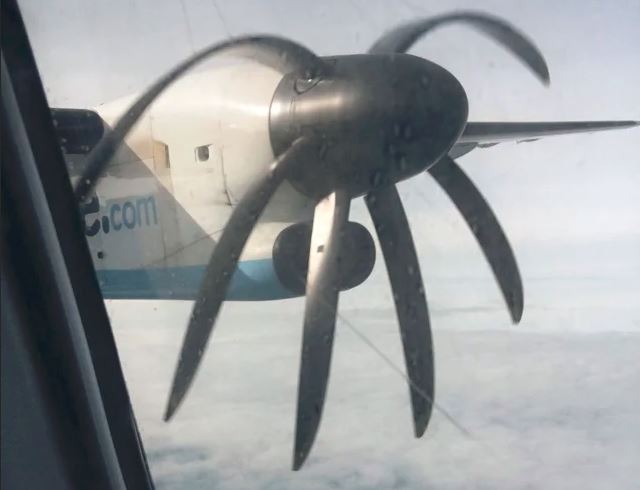 Video image made of lines belonging to different times, changing the shape of the blades, source

This image is not a high speed photo freezing the propeller, on such photo the propeller wouldn't be distorted. The distortion is caused by the way the camera scans its electronic sensor, line by line, without freezing the sensor content first.

This is an interesting video of similar effects, like these guitar strings: 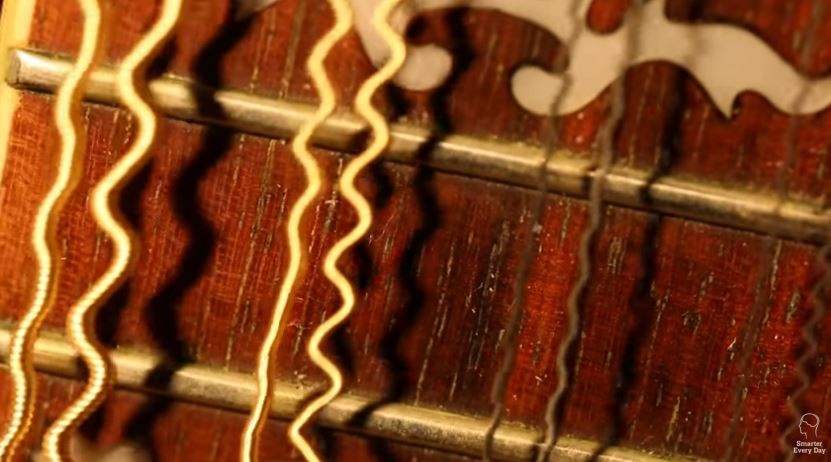 You did not mention the type of instrument or aircraft type, but I assume you mean modern cockpit displays.

The flickering you see in the videos is due to refresh rate of the display being off-sync with the camera recording the video.

More over, older CRT displays used for cockpit instruments are updated in two steps: the first sweep draws the lines and the second one draws the colored areas, like the artificial horizon.

The effect is very pronounced in this video:

Another possibility - though shouldn't happen in a modern electrical system:

Does it happen once at exactly the same time the throttles are opened for a go-around? Could be a minor power fluctuation as the engines increase thrust, adding to the current in the 28V circuits.

Suppression and filtering should catch all of that in a modern aircraft, but CRT-based displays can always glitch out briefly for many reasons like voltage/current spikes that would not affect a modern switchmode PSU.

Additionally CRT displays can be tweaked by a stray magnetic field - it doesn't take much to throw a beam of electrons off target, which is perceived as a brief visual flicker.

Not the answer you're looking for? Browse other questions tagged flight-instruments display or ask your own question.