Wind direction on a chart? [duplicate]

Ask Question
Asked 3 months ago
Active 3 months ago
Viewed 99 times
0
$\begingroup$
This question already has answers here:
How is wind direction reported (blowing from or blowing to)? (4 answers)
Closed 3 months ago.

Does the below suggest wind is from the SW (ie: you standing in the middle facing north with wind to tour rear left) or it's blowing from NE towards SW? 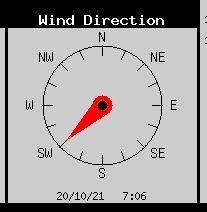 Wind Direction is typically reported in meteorological observation as the direction from where the wind is blowing.

The normal unit of wind speed is the knot . Wind direction is measured relative to true north (not magnetic north) and is reported from where the wind is blowing. An easterly wind blows from the east or 90 degrees, a southerly from the south or 180 degrees and a westerly from the west or 270 degrees.

The true direction from which the wind is blowing at a given location (i.e., wind blowing from the north to the south is a north wind). It is normally measured in tens of degrees from 10 degrees clockwise through 360 degrees. North is 360 degrees. A wind direction of 0 degrees is only used when wind is calm.

Without reference to what chart you are referencing it is not possible to confirm this, but I would make an educated presumption that the wind in your example is blowing from the SW (to the NE) - a "south-westerly".

The only exception this the presumption (wind FROM) is when a chart gives a wind-sock symbol - in this case I would assume the wind sock is pointed to the direction where the wind is is going TO, as a real wind-sock would! 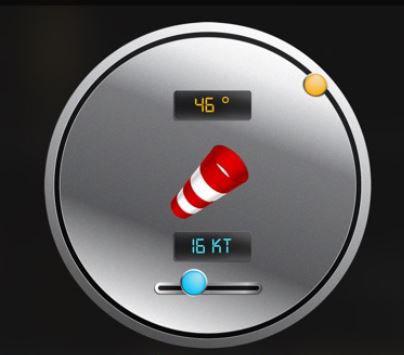 ICAO Annex 3 - Meteorological Service for International Air Navigation - does not actually specify this (wind direction always being 'from'). (Probably because universally wind direction is given as degrees FROM in meteorology).

4.6 Observing and reporting meteorological elements
4.6.1 Surface wind
4.6.1.1 The mean direction and the mean speed of the surface wind shall be measured, as well as significant variations of the wind direction and speed, and reported in degrees true and metres per second (or knots), respectively.

But does confirm that it is given in degrees True.

30
How is wind direction reported (blowing from or blowing to)?
0
How is heading / windspeed written?

6
How do pilots clear an aircraft to fly through a hurricane?
13
What is wind "CALM"?
9
How does latitude affect the air temperature at 8 km altitude where planes fly?
9
Can the "G" and "VRB" wind conditions be combined in METARs?
3
What are RW values in Venule increments?