Edit: I am thinking about a small, four to five passenger civilian aircraft for urban mobility

Much depends on your specific aircraft. Some have a need for fuel pressure values, others don't. Likewise fuel temperature readings.

On the 737, there is a light as you describe next to each fuel pump switch, linked to a sensor just downstream of the corresponding fuel pump. If the light's on, the pressure is low and the pump should be turned off because it has failed. I don't think Boeing even tells us what the pressure is in PSI; they just say "If the pump output pressure falls below a limit value then...". I can't read the PSI, and I can only affect it by turning the pump on or off... so all I need to know is "sufficient" or "not sufficient." That's it -- no value to be gained in showing me a more exact number, nor in having me memorize its limits.

The 737 also has a fuel temperature gauge, which reads from one tank -- with the assumption that this is representative of the others. My guess is that Boeing has done enough testing that they're happy with that assumption. If that temperature gets cold enough (rare, but possible), then you have to do things to increase that temperature -- go faster or go lower, or both, generally. In this case, there is enough value in seeing that trend (plus, knowing the number in case of getting cold-soaked fuel frost or other icing on the wing) that we DO get a numeric value. 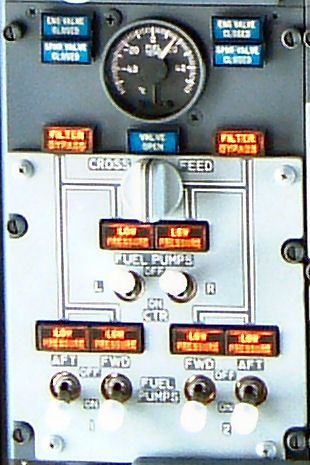 The fuel temperature gauge is circular, directly above the blue (crossfeed) VALVE OPEN light in the picture.

Note that all lights are on, so this was taken during a "lights test" -- in normal operation, the low pressure amber lights would all be extinguished. The logic for them is that the main tank switches are on when the engines are running, and an amber "LOW PRESSURE" light is telling you that the pump isn't running (which is either a failed pump, or an electrical bus unpowered, or the pump switch turned off, or some rare conditions like a popped circuit breaker or failed sensor). The center tank amber lights are active when the switches are on, but are off when the corresponding switch is off. This way, when you aren't using the center tank, you don't have the amber lights on continuously; it's normal to get the center tank LOW PRESSURE lights coming on when you exhaust the center tank, which is normal ops. Then you turn off both switches, and both lights are out.

The case where you'd turn off a not-failed main tank switch in flight would be to cross-feed fuel (i.e. feed both engines off of one tank) in order to balance the main tanks. In that case, the amber lights for the turned-off pumps are ON, because you're in a condition that you will want to correct (after the fuel is balanced).

Of course, sitting at the gate with engines not running & all pumps turned off, you'd have the 4 main tank LOW PRESSURE lights illuminated, but in that condition you have plenty of amber lights lit up on the overhead panel, and that's normal for being at the gate & not running.

If your fuel system has pumps, a pressure gauge is important because it provides a precise status of the pump and can provide early warning of future problems, like pressure fluctuations, or declining but still acceptable pressure.

A warning light is there to get the pilot's attention when things really go south. In an ideal world, you'd want both, but of the two, the gauge is more important and if forced to choose one or the other, it would be the gauge.

If you have fuel injection, the pressure requirements are much higher and the gauge has a more critical function because there is less margin for degradation before unpleasant difficulties arise.

Fuel temperature is not important if you are running gasoline, so temp gauges are pretty rare with piston engines. But for kerosene, being a relative of diesel with viscosity issues when cold, temperature becomes important once it gets really cold (jets generally require fuel heaters and will have bulk fuel temperature limits that have to be observed) so fuel temperature indication is a basic part of the fuel system.

Regarding small aircraft, I had an experience this morning that shows why a pressure gauge is useful.

On the right tank, I was in the center of the green arc without the boost pump. On the left tank, though, it was at the low end of the green arc. Technically still okay, but I felt safer leaving the boost pump on when using that tank. More importantly, I know there is something on that side that needs fixing before it becomes a critical problem in flight.

I’ve never worried about fuel temperature; avgas freezes at -100°C, and my cabin heat is nowhere near good enough for me to fly if it’s that cold. However, jet fuel can freeze at up to -40°C, which jets can easily encounter at high altitudes, so that’s an issue they do have to worry about.

Not the answer you're looking for? Browse other questions tagged aircraft-design fuel-systems or ask your own question.

12
Can we eliminate the center tank of large passenger planes?
2
Why are ambient pressure and burner can pressure always the inputs on a hydromechanical fuel controlling system?
5
Why does fuel vaporization in a carburetor cause a temperature decrease rather than a rise?
1
Does an increase in inlet temperature affect fuel flow and power output?
6
What causes fuel gauges to be untrustworthy?
1
What is the difference between fuel control unit and fuel flow meter (transmitter)?
1
How much pressure do boost and jettison fuel pumps produce?
0
How should fuel go through pumps?
1
What are the fuel system pressure and temperature requirements of a Williams FJ44 engine?