How to calculate drag of a flat rectangular surface at given area, air density, airspeed and angle of attack?

I'm a complete noob in aerodynamics, and I'm trying to calculate the drag of a rectangular flat area, given the air pressure / density, area, angle of attack and airspeed. I've read this question, but it is about calculating the drag for two rectangular areas, whereas I need it for one area, and I couldn't derive a formula for one area. Can you please help me with this ?

I need this to get the drag of cowl flaps extended at an angle between 0 and 20 degrees for a FlightGear model.

Simply using the generic drag equation will get you within the ballpark required for FlightGear.

$$D = C_D \cdot \frac{1}{2} \rho V^2 \cdot A$$ with $C_D$ the flat plate drag coefficient and A being a reference area of your cowl flaps. The data for the correct Reynolds number is best used, with $$Re = \frac{\rho V \bar{c}}{\mu}$$ with $\bar{c}$ = mean aerodynamic chord and $\mu$ = kinematic viscosity of air. The Re uses the wing geometry to determine if the flow is laminar or turbulent, which has a large influence on the drag calculation.

Note that we're calculating additional drag. When the flap is fully retracted and aligned with the cowling, additional drag is zero. Pull the flap open and extra drag is created - it will be less than bluff body drag, since the cowl flap opens to expel exhaust gases which prevents some of the pressure drag from occurring. 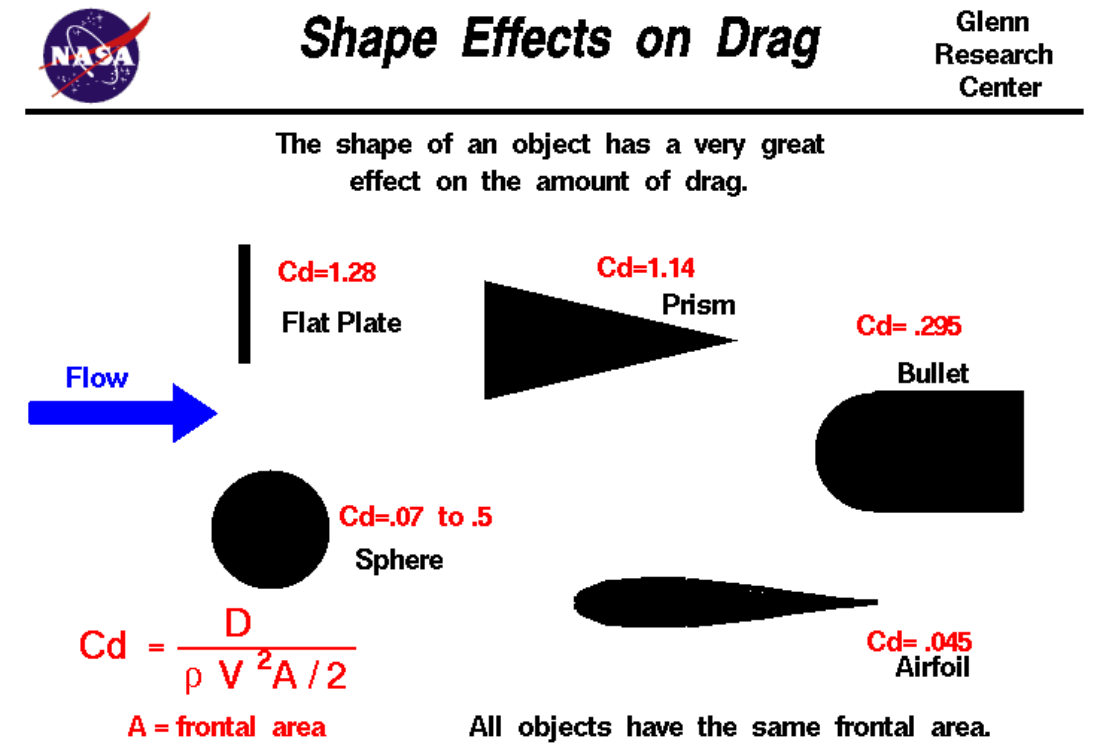 To keep things simple, we can use bluff body aerodynamics with the front projected area as our reference A. For instance an airfoil $C_D$ of 0.045, with projected area of 0.002 * sin$\alpha$ [m$^2$]. $\alpha$ is the deflection angle of the flap.

The exhaust gas expelled behind the cowling flap prevents much of the pressure drag from happening, like in an airfoil where the flow gently foils back into the afterbody. Without the exhaust gas the $C_D$ would be higher, more that of a bullet. How much more depends on a whole lot of exhaust gas pressure parameters. Values of between 0.05 and 0.3 seem could be taken.

Not the answer you're looking for? Browse other questions tagged aerodynamics drag angle-of-attack or ask your own question.

17
What is the performance of a flat plate wing?
2
How do you calculate coefficient of drag at an angle?

5
For a large commercial plane on landing, does the L/D ratio increase, decrease, or not change much?
0
How can the required wing area for climb be calculated, given aspect ratio?
5
How do you calculate total drag on a wing?
2
Is it possible to estimate airspeed on top and bottom sides of a wing at zero angle of attack?
4
How are Cd and Cl calculated from Cp data?
1
What effect does the angle of attack have on lift and drag?
1
does a semi sphere have more drag in comparison to a flat plane with equal surface area?
8
What is the "compression ratio" of air hitting the nose?
2
How do you calculate coefficient of drag at an angle?
1
What would be the Sref i.e. Reference Wing Area for Drag Build Up Calculation in case of a box wing design?