What's the relation between ADS-B and MODE S

SSR protocol is used to manage transmissions on SSR frequencies (1030 and 1090 MHz). Mode S is a part of this protocol to manage data exchange between interrogator and transponder. 1090ES is a part of mode S describing how a transponder can transmit long unsolicited messages (extended squitters) which are used to carry ADS-B message (DF17/DF18).

Yes, 1090ES is a user of mode S. But ADS-B is not required to use a transponder to broadcast the ADS-B message, it can use UAT (or VDL) as well.

No, Some older Mode-S transponders do not support 1090ES, they cannot send long messages required to broadcast ADS data.

The 'S' of Mode S is 'selective', but it doesn't match with ADS-B that broadcast without interrogation signal.

SSR/Mode S and ADS-B technologies, like PBN/RNAV, are not well treated in technical literature due to the numerous changes during their infancy. The result is the wording is often misused and the big picture is blurry, only unrelated details are discussed without providing the whole context.

The key point is to identify clearly, like in OSI networking model, the different functional layers and data formats used. ADS-B and SSR Mode S are not on par, ADS-B is a higher level service using the lower transmission capabilities of mode S.

And indeed ADS-B has nothing to do with SSR reply to interrogation also found in Mode S, but driven by a different higher service.

What is involved when a ADS-B transmission occurs 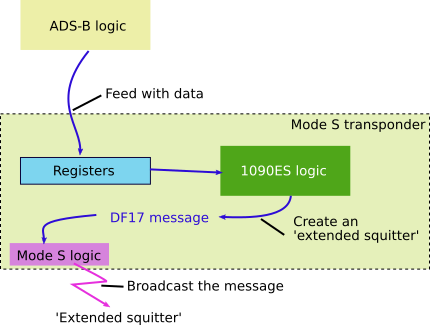 An ATCRBS interrogator on the ground can interrogate all transponders (A/C/S) using multiple combinations to select either only mode A/C, or S, or a combination. It can also elicit replies from all mode S transponders, or from a single one. This is this selective interrogation function you refer to in your question.

Responding to ATCRBS is usually done in mode S by the same logic which is at work in mode A and C, except an additional 56 bit data frame is added.

In addition mode S transponder have the possibility to broadcast frames without prior solicitation, this is the squitter mode.

Among these downlink formats there are two important ones: DF11 is used to reply to 'all call' interrogation (equivalent to replies in mode A and C), and DF17 which includes additional information, among them the position, is used for ADS-B out.

A mode S transponder can broadcast two types of unsolicited messages: Short (56 bits) and long (112 bits). Initial versions of mode S transponders were designed to manage messages short messages. This was compatible with the DF11 message used as acquisition squitter for TCAS and to reply to Mode-S acquisition interrogations (UF11).

The long format, usually referred to as the extended squitter is the one used to squitter DF17 message used by ADS-B.

1090ES refers to a long message transmitted on 1090 MHz, the frequency used by mode S to (reply and) broadcast.

This name 'squitter' comes from the DME transponders. The ground station used in DME is a transponder which replies to aircraft interrogators. In order to transmit something without interrogation, and allow aircraft to synchronize on the DME station, these transponders were sending random pulses called squitters. Mode-S reused this terminology to refer to any unsolicited transmission.

One level up: The ADS-B service

ADS-B is a user of the transponder. How ADS-B is materialized is actually undefined, but it's usually a piece of software in the transponder box, or a separate box. It builds DF17 messages and asks the Mode-S transponder to sent them using the Mode-S protocol.

The chain is somehow similar to using a modem to communicate:

1090MHz is the frequency used for replies by Mode A/C/S transponders when they are interrogated on 1030MHz.

A squitter is a transponder that sends replies without being interrogated. This is a weird concept, but it’s central to how ADS-B works within the framework of Mode S.

1090ES is a superset of Mode S, i.e. it does everything that Mode S does plus ADS-B.

No. All older Mode S transponders must be replaced with new 1090ES units to comply with ADS-B mandates. However, many manufacturers offer trade-in/upgrade programs.

The 'S' of Mode S is 'selective', but it doesn't match with ADS-B that broadcast without interrogation signal. Can you explain about it?

The general idea is that Mode S was already widely adopted (at least for turbine aircraft) and well understood, and they could get the desired functionality for ADS-B just by adding a few extra data frame types, which was a lot less work (and cost to most operators) than building an entirely new parallel system.

Not the answer you're looking for? Browse other questions tagged ads-b mode-s or ask your own question.

4
Why is a Mode S transponder required to be installed and working for TCAS II to be operational?
6
What's required for the ADS-B to function? A GPS or Mode S Transponder?
1
How to extract the interrogator ID from a DF11 message?

13
What is the relation between aircraft altitude and ADS-B coverage?
21
How does ATC radar/ADS-B ground stations not get confused with signals sent from multiple aircraft?
7
What are Mode C requirements with ADS-B 978?
9
What is the difference between ADS-B UAT and ADS-B ES?
5
What is the minimum set of registers to fill for ADS-B?
6
What's required for the ADS-B to function? A GPS or Mode S Transponder?
1
How to know which data came from Mode S and which came from ADS-B (FIS-B)?
3
Is ADS-B anonymous mode deterministic?
2
Relation between Squawk code and ICAO adress