What extra components does a fuel tank have?

For small-to-mid-size aircraft like V-280, and gulfstream aircraft, what component does their fuel tank has when it arrives for assembly? Is it just a metal box with valves? Or it contains heating elements and damage/rupture/pressure change detector?

I don't know anything specific about the V-280, but I know about conventional airplanes. Everything from the Cessna 172 to bizjets (like Gulfstreams) up to Boeing and Airbus airliners all use integral wing fuel tanks.

The structural wing box actually is the fuel tank. All of the open areas inside the hollow wing box structure become the fuel tank. When the wing box is assembled together sealant is applied in between all the joints to make it water-tight.

There is sealant in between where the front spar is fastened to the upper and lower wing skin surfaces, and the same is true for the rear spar.

The wing is the perfect available empty space to carry fuel in. The weight of the fuel acting downward opposes the upward aerodynamic load forces on the wing, allowing the wing to be made less strong (and therefore lighter). It is extremely likely that the Bell V-280's wing is the fuel tank. It is the standard location for fuel on aircraft with a wing.

As you'd expect, the wing box is sealed and outfitted with pumps and pipes for fuel delivery.

If you look at a photo of an aluminum Boeing aircraft (not the 787) which shows the upper or lower surface of the wing, in most cases you will see that the structural wing box is a darker color due to the Corro-guard coating. The composite leading and trailing edges (and flight controls) that are attached to the wing box are usually painted a lighter color (though this is a customer option- United Airline's and Singapore Airline's are all the same color).

Here is a link to a YouTube video about the making of the 747-8 that takes you to the timestamp (16:55) where they show this wing box being assembled (the front of the wing is pointing up in the air):

Here is a C-130 wing with a section of the upper surface of the wing cut out for training: 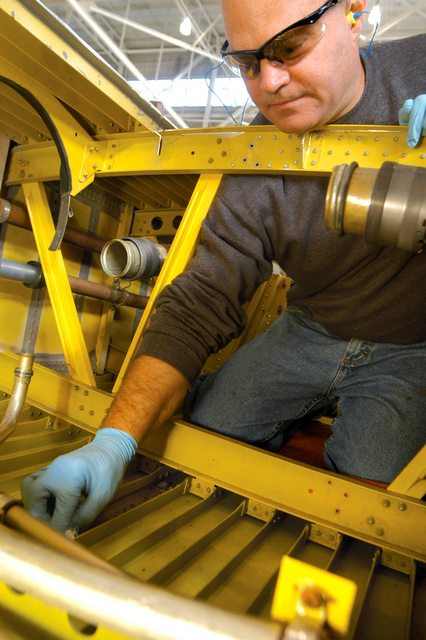 (af.mil) Michael Gayon does a seal repair inside of a fuel tank on the C-130 Hercules wing at Robins Air Force Base, Ga. Robins AFB units combined forces to procure a wing so students of the 373rd Training Squadron's Field Training Detachment could have hands-on training. (U.S. Air Force photo/Sue Sapp)

Not the answer you're looking for? Browse other questions tagged fuel-systems fuel-tanks or ask your own question.

8
What is trimming the fuel tank?
13
Why is mixture lean recommended on the ground?
1
What is a fuel tank float valve and how does it work?
16
What is the appropriate fuel tank selection to land a 172?
15
What could the fuel pump failure have been that my flight experienced?
23
Is there a tank priority sequence for using the fuel tanks?
1
Where are the fuel tank sumps on an Aquila A210?
0
Why doesn't the Convair 580 have check valves to prevent inadvertent fuel transfer?
3
Is fuel in trim tank usable?