How does a jet engine burn fuel when it is not on an afterburner?

I understand the idea behind afterburner as fuel is added to the exhaust to increase the mass and expansion of gasses to increase the thrust, and that explains (in very obvious way) how the fuel is burned when a jet engine is on an afterburner.

However, when the jet engine is not on afterburner, where and how the fuel is burned? This NASA article describes "there are as many as 20 nozzles to spray fuel into the airstream. The mixture of air and fuel catches fire". So does it mean there are two separate phases to add fuel to airstream, first (compulsory) for the normal operation and the second (optional) for the afterburner?

The regular way to burn fuel is not to use an afterburner. The afterburner is an option added downstream of a regular engine to increase its thrust temporarily. It is an interesting alternative to fitting the aircraft with a larger engine. However the additional thrust it delivers is very expensive.

The normal way to burn fuel involves a combustion chamber fed by an air compressor. The afterburner is able to work without a compressor because it uses air from the engine upstream.

I'll split my answer in two sections: The regular combustion chamber and the afterburner.

1. Regular combustor, e.g. for a turbofan

There are four steps in the jet engine, each occurring in a different section:

In addition this engine, which is a turbofan, has a large fan to create thrust. A fan is like a propeller. From left to right: fan, compressor, combustion chamber, turbine, exhaust:

Air is compressed in order to store a large quantity to allow more fuel to be burnt. The more fuel burnt per unit of time, the largest the power of the engine.

Air and fuel are injected in a combustion chamber, which can be of several types, in this example this is an annular duct with individual fuel nozzles.

Each fuel nozzle sprays fuel in an area of the chamber. Air from the compressor is directed to this area to create the mix. Combustion occurs in the annular duct.

There are igniters to start the combustion, then gas continuously burn and as the temperature is extremely hot (1,700°C for this engine), combustion is spontaneous. Igniters can then be turned off, maintained active, or set to be reactivated automatically in case of flameout (choice from the crew).

The annular duct is made of liners with hundreds of holes. Air also enters the holes to create swirls in the combustion chamber and improve fuel dilution, and to cool the liners as this section is the hottest of the engine and materials are close to their temperature limit.

Gas produced by the combustion is directed to the turbine stages. The turbine spins, moved by gas velocity. The turbine role is to extract energy from hot gas to rotate the compressor and the fan.

In this engine the fan just pushes air rearwards. This accelerated air creates thrust by reaction (80%). A small amount of thrust is also produced by the core engine when gas is released in the exhaust (20%).

A more complete explanation in this video. Detail of the combustion chamber: 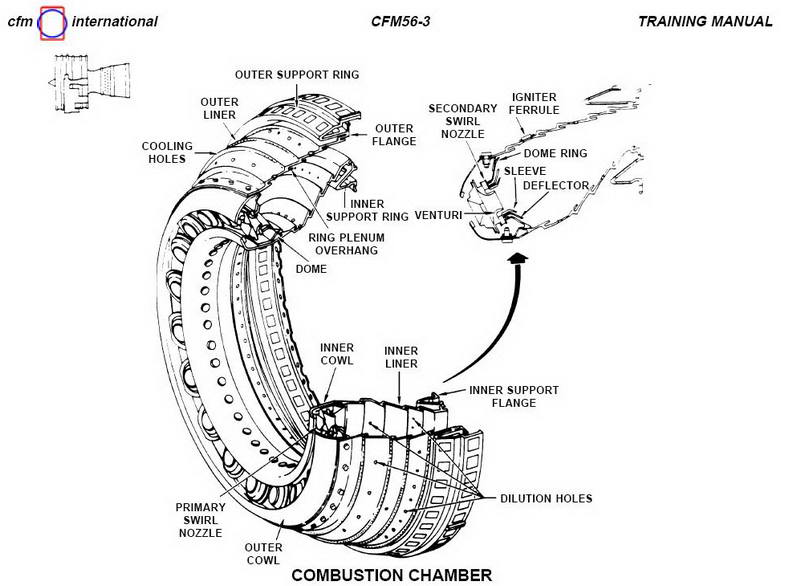 The afterburner is a second burner, but it works only in the hot flow of a jet engine upstream, it is a complement to this engine.

As shown in Nasa slide provided in OragnicMarble's answer, thrust in aero-engines is created by increasing air momentum, the product of mass by velocity. It doesn't matter if a large mass is accelerated by a small amount, or a small mass is accelerated by a large amount. However accelerating by a small amount if economically more efficient, that's why manufacturers use a larger fan to produce a larger thrust rather the same fan with a higher velocity.

There are cases where an additional thrust is required only at specific times, and where a larger engine is not desirable (weight and size). For them it makes sense to increase air velocity a bit more, and keep the mass unchanged. The afterburner shines in this niche.

The principle is to take the mass of gas after the normal engine exit, and re-heat it to increase its pressure. Energy is again fuel combustion with oxygen still present in the gas. The compressor is not required to increase the mass of air to be burnt. As there is no compressor, the turbine can be removed too. So in effect an afterburner is a very simple solution.

This additional heat expands gas, increasing its pressure, and a second nozzle converts the additional pressure into velocity.

Afterburners have many cons: Noise, flame and inefficiency (around 5 times more fuel than a regular combustor). They are not used in civil aviation, except on the Concorde and Tu-144, the only supersonic civil aircraft. Post-combustion was used for takeoff and to accelerate to supersonic speed.

Another NASA article shows you the diagram you need.

You can see the two places fuel can be injected, before and after the turbine. As you say

there are two separate phases to add fuel to airstream

The basic answer is yes. Fuel is burned in the main section to make thrust (and drive a fan in that kind of engine), and keep the compression/combustion cycle going, and to work properly (not melt itself), most of the air that got compressed by the compressor section is used to control the flame boundaries within the burner can and cool the engine. Maybe only a 3rd to half of the mass flow entering the burner can in the core engine actually gets burned, that is, has its oxygen consumed; the rest is for flame control and cooling and is mixed in with the burnt air going into the turbine.

So the air leaving the turbine section of the core engine still has most of its oxygen content. The afterburner just takes advantage of this by dumping more fuel to use up the rest of the oxygen and get a thrust bonus while the air is still compressed. An afterburner is kind of a ramjet stuck on the end of the normal engine, except it doesn't need high speed to get the ram effect; the main engine is providing the ram effect as well as sufficient oxygen to make it work.

So does it mean there are two separate phases to add fuel to airstream, first (compulsory) for the normal operation and the second (optional) for the afterburner?

Afterburners can run much hotter which which means higher thrust for a given size/weight of engine. The trade off is that their fuel efficiency is awful.

Not the answer you're looking for? Browse other questions tagged jet-engine fuel afterburner or ask your own question.

23
What is the difference between turbojet and turbofan engines?
11
Is the compressor required on jet engines? Can air be rammed into the turbine?
6
Do afterburners use excessive amounts of fuel?
-4
Air Pollution and High Pass engines

18
How does contrail formation differ from turbofan to turbojet?
7
How does the Pratt & Whitney F119 achieve its features?
2
Bright exhaust in afterburner vs no visible (bright) exhaust when not in afterburner?
6
Do afterburners use excessive amounts of fuel?
2
How much the Concorde secondary nozzle contribute to thrust?
1
Why this formula says jet engine is efficient at any speed?