Watching this Bronco display, perhaps this is an incorrect observation, but it looks like the airbrakes are independently used to counteract adverse yaw. What is the domain of use for these airbrakes? Are they mechanically linked to the ailerons? Are these brakes also used both together?

Mostly why not fight against adverse yaw by coupling the ailerons to the rudders instead?

This can be seen, among other occasions, at about 2:03 in the video. Here's a screen capture: 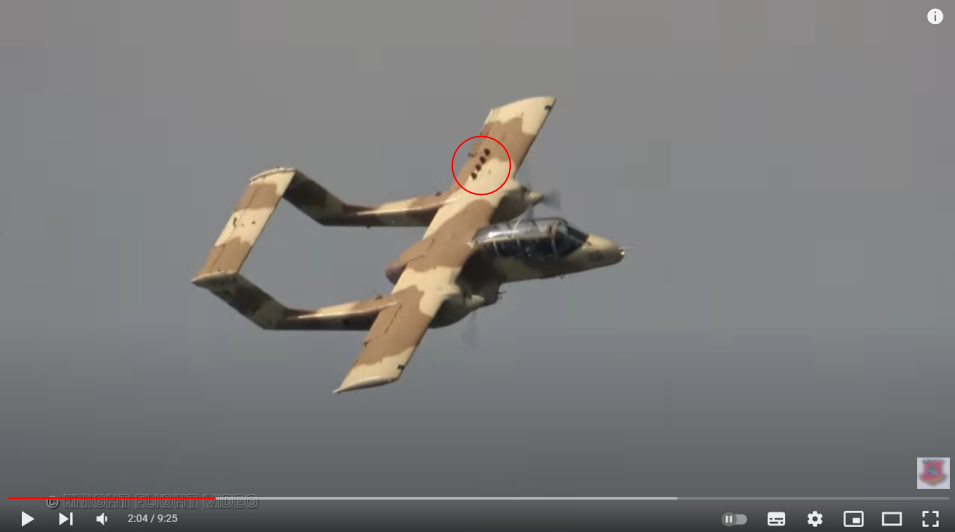 This is quite common for many larger aircraft with spoilers on the wing. Using the spoilers in this asymmetric way is called roll spoilers or spoilerons. They are usually hydraulically actuated and sometimes fly-by-wire controlled.

The Bronco, however, has them mechanically linked to the ailerons:

The lateral system consists of spring and gear tab-boosted ailerons, augmented by spoilers. [...]

Four fan-shaped, upward rotating, axially hinged spoiler plates are installed in each wing. Movement of the aileron displaces mechanical linkage to rotate upward from the down-going wing, creating additional rolling reaction due to lift loss. The spoilers are positioned with their leading edges 10 degrees below the wing upper mold line with the ailerons neutral. At full stick lateral travel, the spoilers are displaced approximately 86 degrees. Delayed operation, due to the submerged neutral spoiler position, prevents projection at neutral trim and allows aileron trim operation without causing spoiler deflection.

The use of spoilerons reduces adverse yaw, but does not eliminate it. Aircraft with ailerons and spoilerons still need rudder input to coordinate turns. The Bronco is also equipped with a yaw damper:

The yaw damper system supplies a control torque to the rudders proportional to aircraft yaw rate and oscillation frequency and in the opposite direction of the yaw motion.

Additional advantages of spoilerons include improved roll control and more space for flaps, as discussed here: What is the benefit of spoilerons compared to ailerons?

Especially at high speeds, ailerons at the wing tips are not good control surfaces for roll control because they can cause the wing to twist, which can lead to control reversal (How does aileron reversal work?). To prevent this, aircraft like the Boeing 777 do not use ailerons at high speeds and rely on spoilerons (and flaperons, see What are advantages and disadvantages of flaperons?) alone:

Not the answer you're looking for? Browse other questions tagged aerodynamics flight-controls adverse-yaw or ask your own question.

9
How does aileron reversal work?
10
What is the benefit of spoilerons compared to ailerons?
8
What are advantages and disadvantages of flaperons?

4
Do major passenger airline jets have airbrakes/speedbrakes?
7
Is this explanation of adverse yaw correct?
4
Why is "proverse" yaw better than no yaw?
3
Is adverse yaw ever desirable?
5
Why does adverse yaw exist?
15
How controllable is the 737 in single-engine manual-reversion flight? Is it controllably landable (or go-around-able) in this condition?
3
Can aileron differential eliminate adverse yaw?