Why doesn't critical angle of attack increase with airspeed? [duplicate]

Critical angle of attack is related to the Coefficient of Lift, which is a function of Reynold's number. Reynold's number depends on the speed of the aircraft. So why doesn't the Critical Angle of Attack change with speed?

Update: My current knowledge about this topic comes to this- The Critical Angle of Attack is a constant for an aerofoil at any altitude and speed. CAoA depends upon Reynold's number, which itself relies upon the velocity of the airplane. For the CAoA to be nearly constant, the effect of Reynold's number and the velocity has to be negligible. Is my understanding correct? If so, why is what I mentioned the case?

Your scepticism is justified. The critical angle of attack (cAoA) can grow as well as shrink with increasing airspeed. Growth is generally due to a higher Reynolds number while a reduction in the cAoA with increasing speed is a transsonic effect, so it depends on the flight Mach number.

In one peculiar case this already stated to happen at Mach 0.3, far below what is normally considered transsonic.

Frequent readers of my answers know that at this point I turn to Sighard Hoerner's book Fluid Dynamic Lift, and you will not be disappointed this time. In section 4, starting on page 4-12 of the 1985 edition, you will find several plots summarizing lots of test data. Hoerner uses c$_{lx}$ to denote the maximum lift coefficient, and although the lift curve slope increases a bit with Reynolds number, this effect is small when compared to the delayed separation happening with higher Reynolds numbers, so his data implicitly shows that cAoA is generally increasing with speed.

Here is Figure 18, the plot for airfoils of 12% relative thickness: 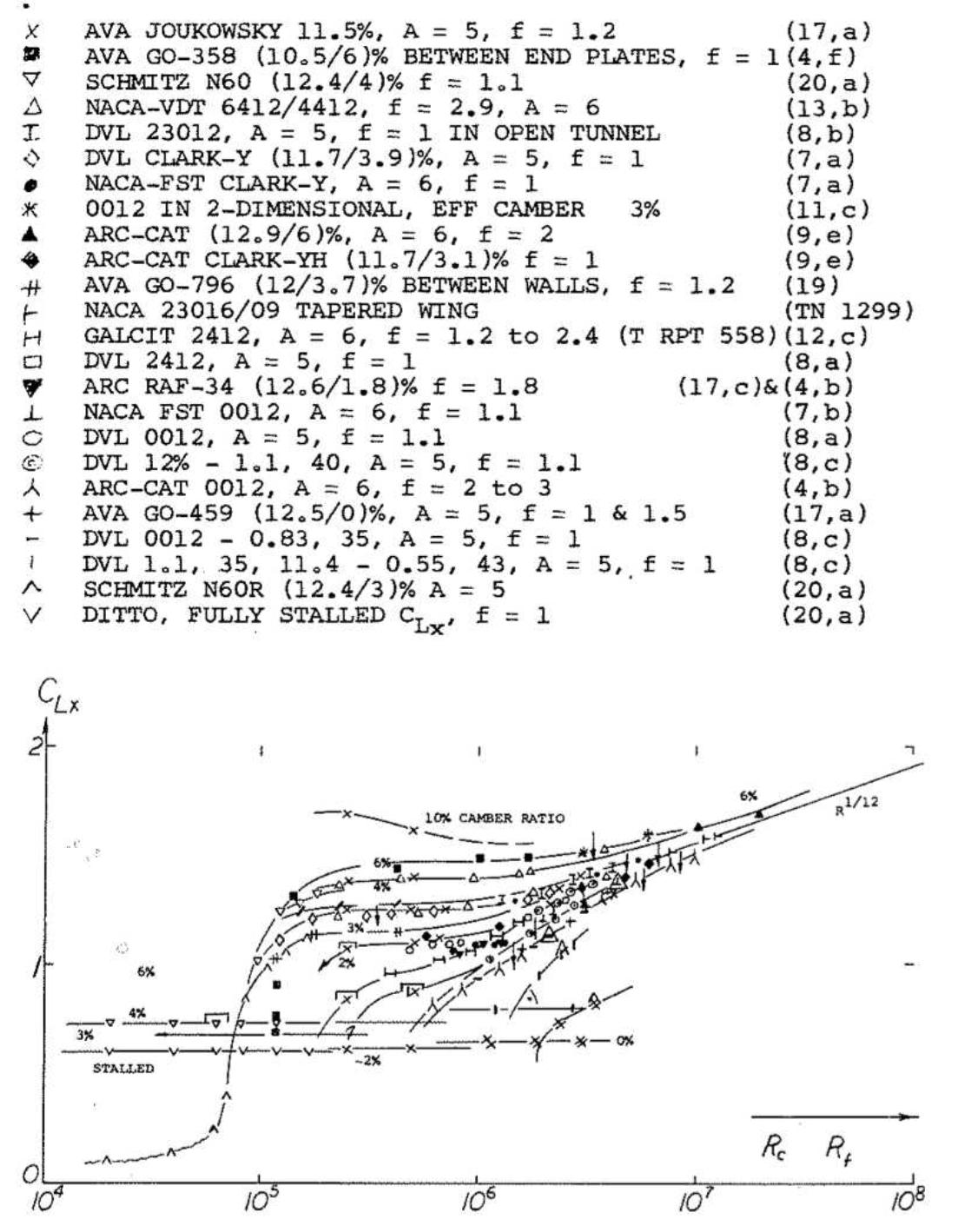 The sudden jump at Re = 0.7$\times$10⁵ to 0.9$\times$10⁵ is caused by earlier transition with higher speed, so a low cAoA caused by laminar separation below that Reynolds number is replaced by an earlier transition and delayed separation of the now turbulent boundary layer beyond that Reynolds number. But this is the realm of small model airplanes.

The highly cambered Joukowsky airfoil goes against the trend and shows a reduction in maximum lift between Re = 10⁵ and 10⁶. The same happens for airfoils with a relative thickness exceeding 20% and is caused by their large nose radius. Hoerner writes:

Those are the ones at the bottom of the group.

If the lift curve slope of a 2D section is 2π, the increase in c$_{lx}$ between Re = 10⁶ and 10⁸ from 1.2 to 1.9 is equivalent to a typical increase in the cAoA of more than 6°. Subtract one degree for the increased lift curve slope and you still have a change of 5° when a typical cAoA at Re = 10⁶ in 2D flow is 12°. In reality, such a range of Reynolds numbers would mean a speed ratio between slow and high flight speed of 100. More realistic ratios are 4, so the change in cAoA over the typical speed range is rather small.

Now to the influence of the flight Mach number: 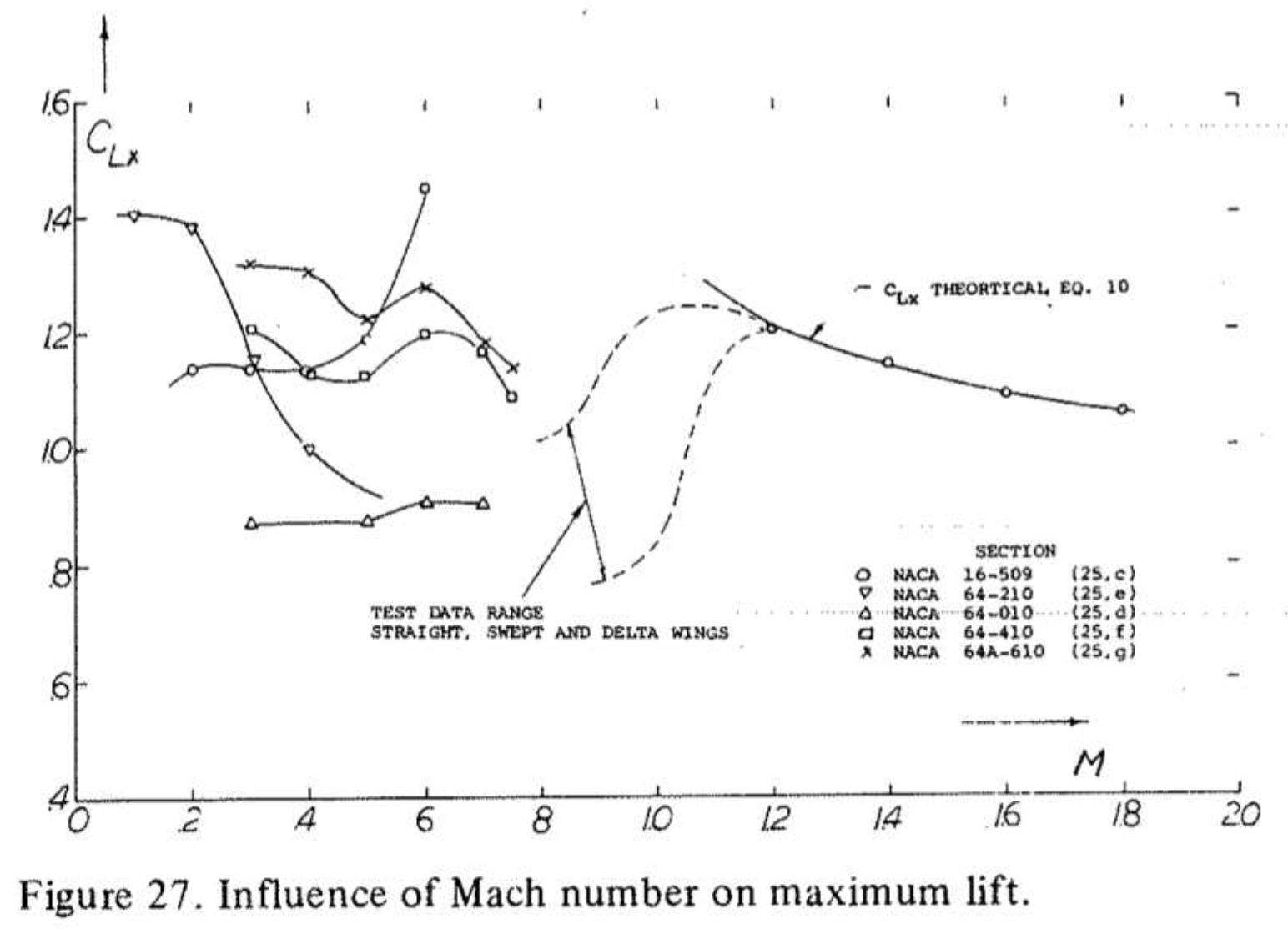 NACA 64-210 shows a dramatic drop above Mach 0.2, so why would I blame this on transsonic effects? Thin airfoils with small nose radii show very steep suction peaks at the nose close to stall, so here the local Mach number becomes indeed supersonic while the flight Mach number would make you neglect compressibility effects. Hoerner writes:

On the first tenth of the chord on blunt airfoils, standing shock waves are formed similar to the more well known shocks on the aft section of the airfoil, except their size is an order of magnitude less. The familiar lambda type shock with a weak forward shock and pressure plateau as illustrated in figure 26 is formed with a laminar boundary layer. With a turbulent boundary layer, the single shock with a strong pressure rise and an expanding bubble is formed at the nose (25,b). These shock waves interact with the boundary layer, causing separation and a reduction of c$_{lx}$ as illustrated in figure (27).

If you want to read my explanation, please turn to the second part of this answer.

Now the change in cAoA, given the right airfoil, can be rather dramatic over the realistic speed range of a fast airplane, so it should not be neglected.

And last, the peculiar case hinted at above: I once worked on a jet trainer which I predicted to have a maximum lift coefficient in clean configuration of 1.28. Flight testing later revealed that it could achieve a maximum lift coefficient of 1.35 near the ground but only 1.26 at 4000 m. The drop in air temperature between ground and 4000 m would shift the Mach number up and cause shock waves at the nose which were not present (or less pronounced) near the ground.

One way to gain greater understanding is to go to airfoil tools and observe the lift vs AoA of your favorite airfoil (try the Clark Y for starters) and you will see that Reynolds number effects generally occur across several orders of magnitude, well outside the speed envelope of your aircraft.

A bit like saying from 0 to Vne would be a few centimeters on a 1 meter Reynolds scale. Reynolds number is linearly proportional to V (not V$^2$), so only great Velocity meters/second (and chord in meters) changes will make a noticeable difference.

Reynolds number, and therefor stall AoA, can be considered approximately the same within a given aircraft flight envelope (recreational, low subsonic), with manuvering effects (G loading in turns) being much more critical.