I see this symbol on an IFR low chart, can someone tell me what it is?

More context would be better. The screenshot you posted indicates that there is a navaid information box above and to the left of the symbol, but you cut it off so we cannot see what it says. If we knew the name of the navaid we could search for it in the 8260-2 database and we would know more about it.

But just the symbol itself is enough to know exactly what it represents (which is the point of there being a symbol at all, of course). As TomMcW pointed out, everything you need to know about the charts can be found in the Chart User's Guide. However, it is not a Compass Locator Beacon but rather a Non-Directional Beacon. (A compass locator is a specific use case of an NDB.)

We can see the difference in the two symbols when they are side-by-side: 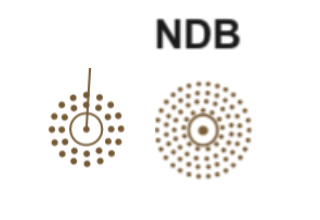 A Compass Locator Beacon has two layers of larger and darker brown dots surrounding its central circle, while a normal NDB has four layers of smaller and lighter brown dots. The image you posted clearly depicts an NDB and not a CLB.

You will find CLBs associated with instrument landing systems, as Tom said. NDBs may also be depicted as the outer marker of an ILS, but they can also appear elsewhere, for example on an airport proper.

It is a compass locator beacon1. It’s an NDB located at the outer marker of an ILS. Despite the name it has nothing to do with a compass. According to ARGOTI it is called that because the name “actually comes from the old radio compasses installed on airplanes.”

Not the answer you're looking for? Browse other questions tagged aeronautical-charts ifr-navigation or ask your own question.

4
On an IFR Low Altitude Chart what does this symbol mean?
13
What are those 5-character alphanumeric waypoints?
3
What is this black symbol on a VFR chart?
8
What does the "D" symbol mean on this instrument approach chart?
4
Does anyone know what this approach chart symbol is?
4
Why do TACANs not have a symbol for compulsory reporting on IFR Enroute Low Altitude charts?
5
How to use airport panel information on sectional chart?
3
What does this symbol on this Aerodrome Chart mean?
1
Help reading a FAA departure procedure chart