Which airplane is visually crossing the path of the descending Dragon spacecraft on Sept. 18, 2021?

In the recording of the SpaceX live-stream covering the return of the Inspiration4 crew in the Dragon spacecraft one can see an aircraft visually cross path with the capsule at 22:59:58. While the encounter is stunning to see, the proximity is surely just apparent, owed to the viewing angle and extreme focal length of the lens. I asked a question over on space exploration but it occurred to me that many aspects are actually aviation questions. Here are my questions regarding the aviation side of the incidence.

At closer inspection, the crossing airplane seems to me at an angle of maybe 15 or 20 degrees above or below the horizontal plane (the vertical stabilizer seems visible and the wings seem to appear at a flat angle).

I have the following questions:

The following image is a frame from the video. The bright dot in the middle is the capsule. I'm not sure what the direction of the shot is, whether it is pointing upwards or downwards, and at what angle. Knowing the altitude of the other plane would give us an idea. 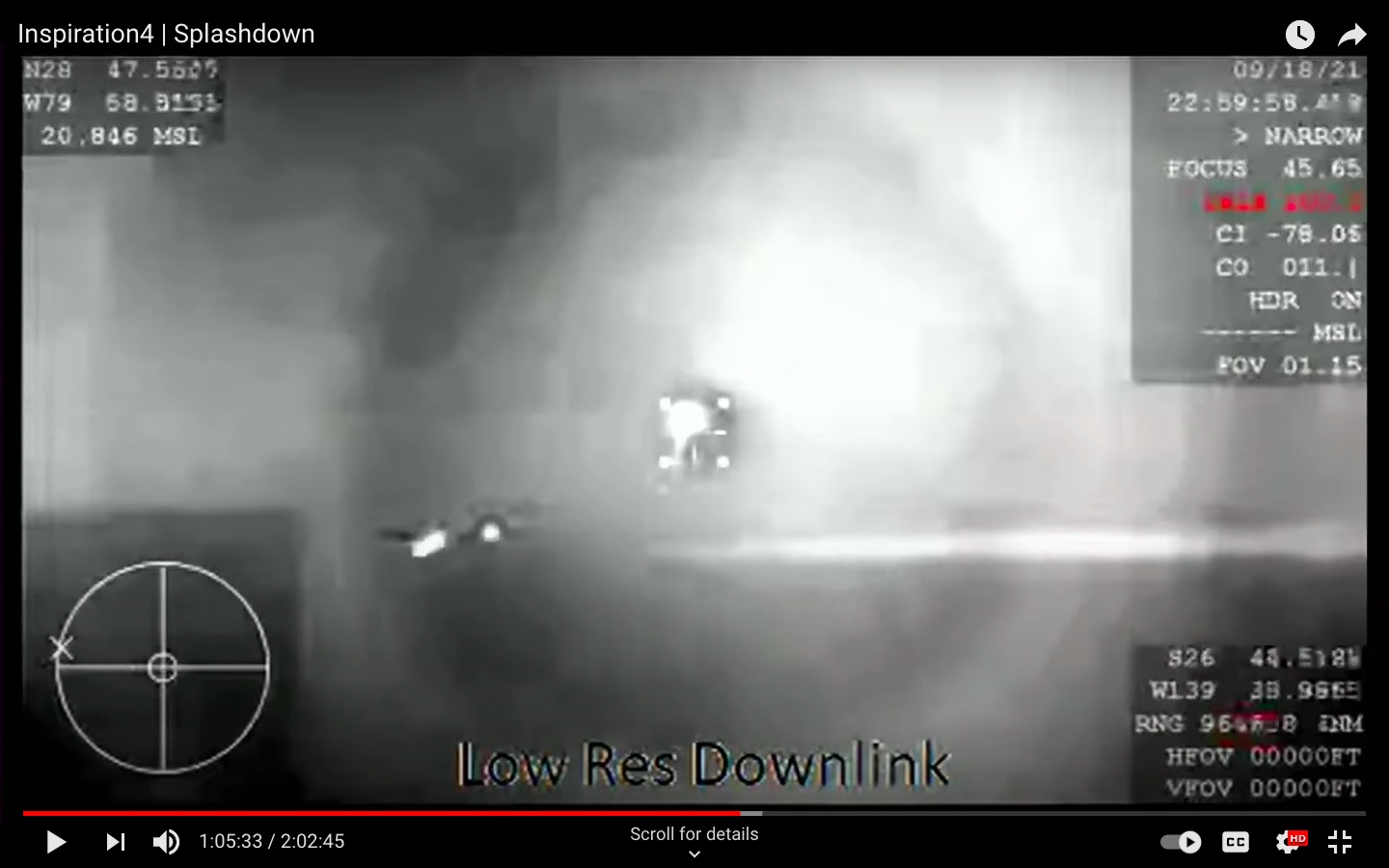 As Bianfable already posted in their deleted answer, the only aircraft in the NOTAM zone at this point in time is one of NASA's WB-57s, the N926NA. According to an article on spaceflightnow.com, NASA deployed the surveillance aircraft in exchange for permission to "inspect the [para]chutes before and after the flight" (thanks to mins for the detail). The WB-57 filmed the reentry with one of its specialized equipment, the Airborne Imaging and Recording System (AIRS). The system was originally designed to inspect space shuttles during the ascent phase in order to detect potential damage of the kind that led to the loss of Columbia. It can take infrared videos at extreme range.

The N926NA is flying at 20,000 feet. The camera is looking roughly southwest in the direction of the incoming capsule. The only information about that is from the same video at 20:14.1 The assumed splashdown location and orbit implies that during the video the capsule is crossing Florida at a rapidly decreasing altitude between 80km and around 30km; the thresholds are the beginning and the end of comms blackout due to the ionized hot atmosphere surrounding the entering capsule. The capsule is seen from below, as are jets at the cruising altitude of 30,000 feet.

After looking at the details I think the only aircraft crossing the visual axis towards the incoming Dragon spacecraft is FedEx FDX251, at this point flying at 38,000 feet, according to flightradar24. 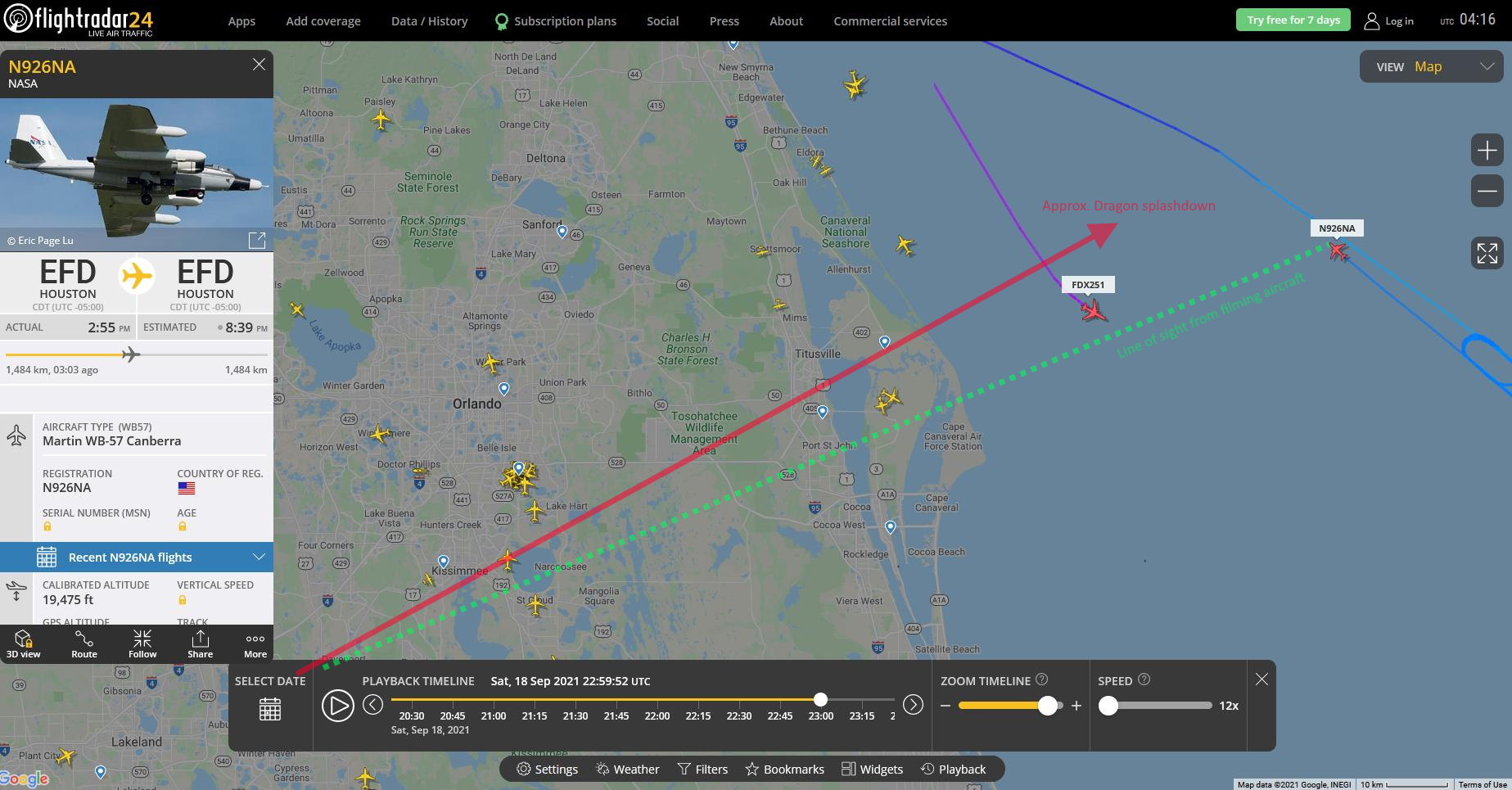 The image is a screenshot of flightradar24 with the location of the two aircraft involved at the approximate time of the pass. The red arrow is a pretty wild guess of the Dragon trajectory with an estimated splashdown location of 80.3W 28.8N from here, the only site I could find that provides splashdown coordinates at all. Note that the precision of 0.1 degree corresponds roughly to a distance of 10 km. In an admittedly circular reasoning I adjusted the Dragon trajectory so that it would result in the observed scenario of the three objects being in line, and the Dragon about 4 or 5 times as far as the FedEx plane, dictated by the three objects' altitudes. The green dotted line is my guess at a line of sight from N926NA. Of course all data is inexact (aircraft locations) or unknown (Dragon positions), but it is safe to say that I can construct a scenario which doesn't contradict what we know.

The direction of the crossing aircraft in the video, coming from the right into our south-west facing visual axis, matches the south-east bearing of the FedEx plane. As can be seen, FDX251 is at this point roughly 40 km away from the camera, but the capsule is much farther: At an altitude of 30km, or 100,000 feet, it would have 80,000 feet altitude difference to the NASA plane; that is four or five times as much as the 18,000 feet difference between the NASA plane and the FedEx plane. If they are on the same axis, the capsule is four or five times farther away, in my guessed scenario where the line of sight intersects with the capsule's path.

I find it noteworthy that a few minutes earlier the FedEx jet was probably in a location, including the altitude, that is very close to where Dragon will be just a few minutes later.

1 The trajectory in the video shows an approach across Cuba, not Florida, but I think the close proximity to the shore (if the estimated landing coordinates are correct) means it overflew Florida. But all of this is a conjecture based on incomplete and unverified information. I'll ask over at space exploration whether Dragon indeed flew over Florida.

Not the answer you're looking for? Browse other questions tagged aircraft-identification private-jets tfr or ask your own question.