Why do Russian Su-30SM fighters have white nose radomes?

I am intrigued by the white nose radomes on Russia's Sukhoi Su-30SM fighters. Why white? 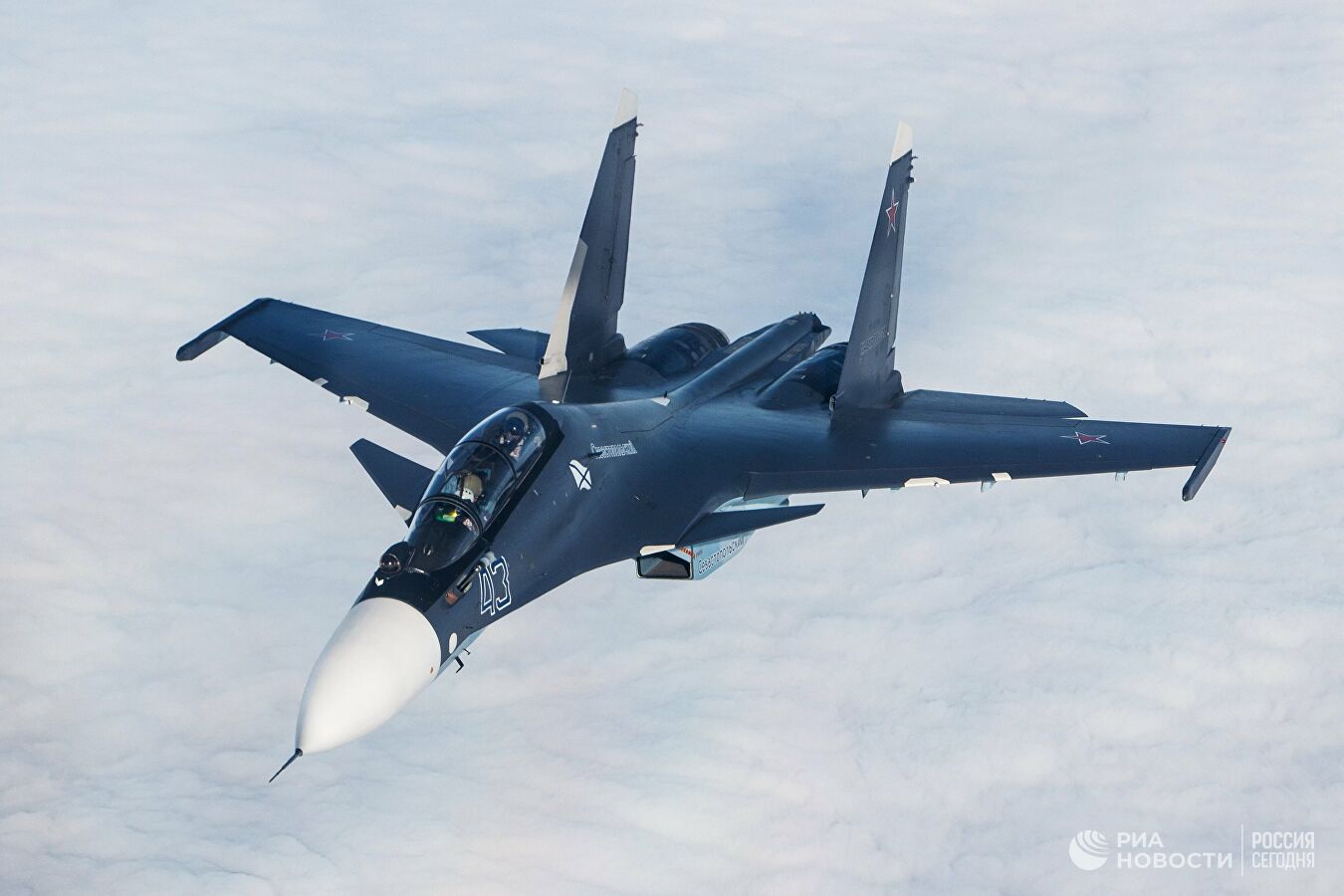 $\color{red}{\star}$ Why not paint the Su-30SM's nose radomes gray? Would the gray paint attenuate or reflect the radar emissions?

I searched online, but found nothing, unfortunately. Obviously, the information required to answer these questions may be classified. It seems that China's Su-30s have gray nose radomes, but I believe those are Su-30MKK rather than Su-30SM.

Lastly, do note that there's a similar question on Aviation SE asking why the Su-34 strike fighters have white nose radomes. I found that question on the Su-34 only after posting this question. I am not yet voting to close this question as a duplicate because I would rather not assume that the nose radomes of both the Su-30SM and the Su-34 are white for the same reason. They probably are, but I do not want to make that assumption.

White radomes are common in many applications, this is the logical choice, a white material reflects sun radiations which otherwise introduce electronic noise in the antenna.

Black radomes, only found in fast moving vehicles, owe their color to antistatic carbon powder used to eliminate electrostatic charges created by air friction. The replacement of black radomes by gray radomes is to hide radomes by lowering the sky/radome contrast.

The appearance of white radomes for aircraft is due to the fact satisfying white coatings have been found, they are used because they provide a better radiation protection than gray radomes. White conductive radomes combine all advantages but are more difficult to produce, and likely useful only for most sensitive radars.

On this aircraft, white radomes are found for the nose (radar), at the tips of the vertical stabilizers (VHF) and on top of the fuselage (satcom).

Materials for aircraft radomes must be resistant like other aircraft parts (pressure, heat, rain erosion) and must be electrically conductive to carry static charges, without significantly affecting waves to/from the antenna they protect. Coatings using conductive oxyds based pigments must be engineered in a way they appear like air to the antenna in the band of frequencies used, in order to not modify waves characteristics. This is possible but difficult as UV and rain make them instable. The stable ones are likely limited to the ones we see in use.

White / low noise is the best option for fixed installations

For fixed stations not degrading the antenna efficiency is most often the main concern and fixed radomes are white.

White reflects a large band of radiations from infrared to UV, both having negative effects.

Black is a better option for static charges elimination

Airborne radomes, specially at the nose, suffer another problem. At high airspeed, air friction ionizes the outer material. Charges accumulate if the material is not conductive and the radome becomes opaque to waves.

Metals are the best conductors, but they also block waves. Conductive radome materials or coatings are actually made of black carbon powder. This is the color we see since radomes are usually not painted to minimize signal losses.

Black is not the best option for radio noise, but has been necessary at a time to eliminate the more problematic static charges.

Gray is a good compromise for visibility and static charges

Black was found to have a significant drawback for a fighter: It increases the contrast over a clear sky, making the aircraft more visible. Conductive gray materials partially solve both the noise and visibility problems. From this page:

Because the black radome made the aircraft look like small black dots on white paper, the subsequent batches of F-16 switched to gray radomes.

Antistatic white radomes are better than gray for noise

Many antistatic coatings do not retain their properties under erosion from rain at high velocity and heat from friction. Their conductivity increases with time, affecting waves transmission. Stable white coatings are available, e.g. this white antistatic topcoat:

They solve the visibility and electrostatic charges problems of military aircraft which was already covered with gray radomes, and in addition deduce the electromagnetic noise:

Civil aircraft radomes: Not as demanding as military radomes

Radomes for civil aircraft have been white or the color of the aircraft since a long time.

Antistatic material resisting heating is used. It can be painted in white or any color at the expense of some signal loss and boresight error, which are both acceptable for a weather radar (large targets) or ATC and satcom applications (limited path losses).

I do not presume to know Russia's reasoning, but I think the following might still be helpful:

A white thermal control coating may be desirable for the outer surface of the radome to eliminate the small amount of ablation of the Duroid due to nuclear flash.

Until this latest development, anti-static coatings for radomes have used carbon black loading to dissipate static charges and therefore color matching of the coating to the airframe color scheme has not been possible.

Naked (unpainted) nose in the 60s before the color developments; the rest of the airframe is painted in anti-flash white (thanks to @mins for finding the above interesting photo; wikimedia.org)

Not the answer you're looking for? Browse other questions tagged paint nose russia su-30 radome or ask your own question.

9
Was any Russian design feature incorporated in modern US fighters jets or vice-versa?
83
Why are Russian cockpit panels painted in turquoise?
29
Why don't Russian aircraft sell as much as their European/American counterparts?
20
What are these lines on the nose of a Boeing 737?
33
Why is there a white line on Russian fighter jets' instrument panel?
29
Why was the Concorde painted white and not black?
4
Why aren't Russian jet airliners popular even in Russia?
3
Why is the nose cone of the Su-34 white?
36
Why does the SR-71 Blackbird sometimes have dents in the nose?
44
Why does the B-2 Spirit have a pattern of thin white lines?