Will air accelerate over a wing and generate lift, if the air has zero viscosity? [duplicate]

Ask Question
Asked 4 months ago
Active 4 months ago
Viewed 241 times
5
$\begingroup$
This question already has answers here:
What is the relation between the boundary layer and lift of an aerofoil? (5 answers)
Closed 4 months ago.

The community reviewed whether to reopen this question 4 months ago and left it closed:

Original close reason(s) were not resolved

Will air accelerate over a wing, if the air has zero viscosity? Will the wing produce any lift under these conditions?

Difficult question to answer, took a lot of reading up

Let's start here though, an excerpt from some NASA educational material.

Aerodynamic forces depend in a complex way on the viscosity of the gas. As an object moves through a gas, the gas molecules stick to the surface. This creates a layer of air near the surface, called a boundary layer, which, in effect, changes the shape of the object. The flow of gas reacts to the edge of the boundary layer as if it was the physical surface of the object. (grc.nasa.gov)

The viscosity - its friction, stickiness, and compressibility, is what gives us the boundary layer on our airfoil.

If we dive deep into the lift and drag, we will at some point meet viscosity with the Reynolds number.

Reynolds number is defined as

Where $\mu$ is the viscosity of our gas.

First of all, with a viscosity of 0, our equation would fail us already since you can't divide with 0. We'll just go ahead and say our viscosity is really small then.

Dividing anything with a really small number, will give us a really big number as a result.

I found this to describe what happens aerodynamically with really high Reynolds numbers: 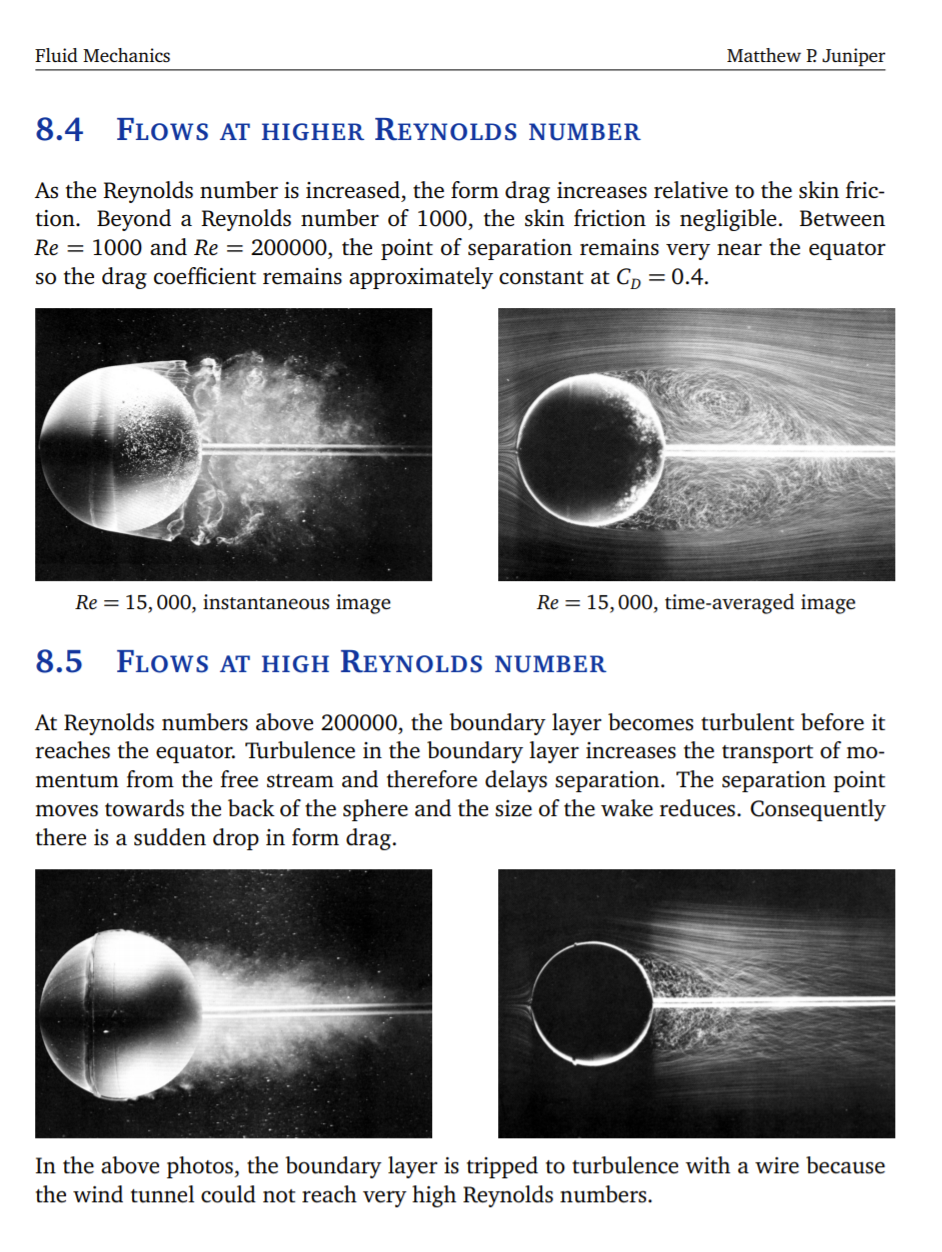 If we take a look at 8.5, we see that our boundary layer becomes turbulent before the equator, and we don't see flow separation until we reach the back side of the ball.

This looks great for our theory of lift without viscous air! higher Reynolds number = less drag!

While this is true, it doesn't necessarily mean our lift is getting any better because of this reduced drag.

The problem we run into, is pressure. We need pressure to build lift. If there is no friction, our air molecules won't stay around long enough for us to build pressure.

What generates lift (according to Bernoulli) is the difference in pressure over the wing, compared to under the wing. With no friction, we won't be able to achieve this.

There is no lift without viscosity

Just after finishing this answer, i found this paper (researchgate.net) Titled: the Explicit Role of Viscosity in Generating Lift. In their conclusion they state:

The formal expression for the fluid-mechanical force (or aerodynamic force) of a body in an incompressible viscous flow is given, which explicitly elucidates the critical role of the fluid viscosity in generating the force (the lift particularly)

I will gladly try to answer any follow-up questions and critiques!

TL;DR: Inviscid flow is not physical, however theoretical inviscid flow can still flow around a streamlined body (such as a wing) and it will produce lift.

There is no such thing as zero viscosity, so all we can use to answer your question is theory.

In the theory, there is "inviscid flow", and it's an extremely useful tool we very commonly use to explore preliminary designs, especially high Reynolds number flows where the viscous effects are far outweighed by the inertial effects. Essentially inviscid flow isn't some special case, it is just flow with an infinite Reynolds number. If you increase Reynolds number further and further, the flowfield changes less and less. It is not crazy to think that this converges are Re approaches infinity.

Before CFD and all the complicated ways of modelling fluids existed, physicists used Potential flow to model theoretical flow. Potential flow follows all the same behaviour as real flow, except it does not account for viscosity. It's impressive how many geometries were modelled by combining sources, sinks, vortices, and doublets. One of the simplest and most famous examples is the Zhukovski/Joukowsky (depending on your textbook!) airfoil, which is a simple doubled (source + sink) with a vortex. The vortex induces circulation in the fluid and gives the airfoil it's cambered shape. Because the vortex induces circulation in the fluid, it generates lift (Kutta-Joukowski Theorem).

The common misconception is there has to be some viscosity to "hold" the fluid together or "stick" it to the surface. In fact, the opposite is true: the fluid cannot detach from the surface because there is nothing to fill in the void. This can easily be seen when using an inviscid flow solver such as JavaFoil - try increasing the angle of attack more and more, and the flow never separates.

Even very sharp corners will keep attached (unless the Kutta condition is explicitly applied). The force required to turn the flow around a sharp corner is "reacted" by the force felt by the surface that is turning the flow, the flow direction bends towards the surface, and the surface feels an upwards pressure - essentially Newton's Third Law. This pressure reduces further away from the wall, and so does the amount of turning on the flow. This should hopefully explain how flow can remain attached to a surface as it bends away from the flow.

When modelling inviscid flow, you must be careful not to take the results as physical. Seperation will never be predicted, even with add-on Boundary Layer models.

Hopefully this makes enough sense, but please feel free to ask for clarification on anything.

4
What is the relation between the boundary layer and lift of an aerofoil?

13
What is the actual air speed over and under a wing due to Bernoulli's Principle?
0
If we use upper surface blowing and externally blown flap on the same wing will lift correspondingly be very high?
5
Can a wing generate lift in excess of its aircraft's weight?
0
Will 3D wing has smaller drag than 2D at same AoA and airflow speed?
2
Why is air accelerating over the wing surface?
3
When using the Source Panel method and dealing only with sources and sinks, why do lift and drag equal zero?
2
How to distinguish the induced drag of a lift-producing wing from its pressure drag?
26
Can lift occur if air is flowing over an object, but not under it?