Why are only two of the five water-facing runway ends at KBOS equipped with EMAS beds?

As KBOS is primarily situated on (and occupies the vast majority of) a peninsula made by dumping lots of sand and dirt into Boston Harbor, and since making new land (especially new land that's going to be left completely unused except on the rare occasions that an aircraft goes off the end of a runway) is expensive[citation needed], only three of said eight major runway ends (22R and 27, which stop well short of the edge of the land,2 and 33L, which runs back up along the neck of the peninsula) are followed by full-size runway safety areas (RSAs): 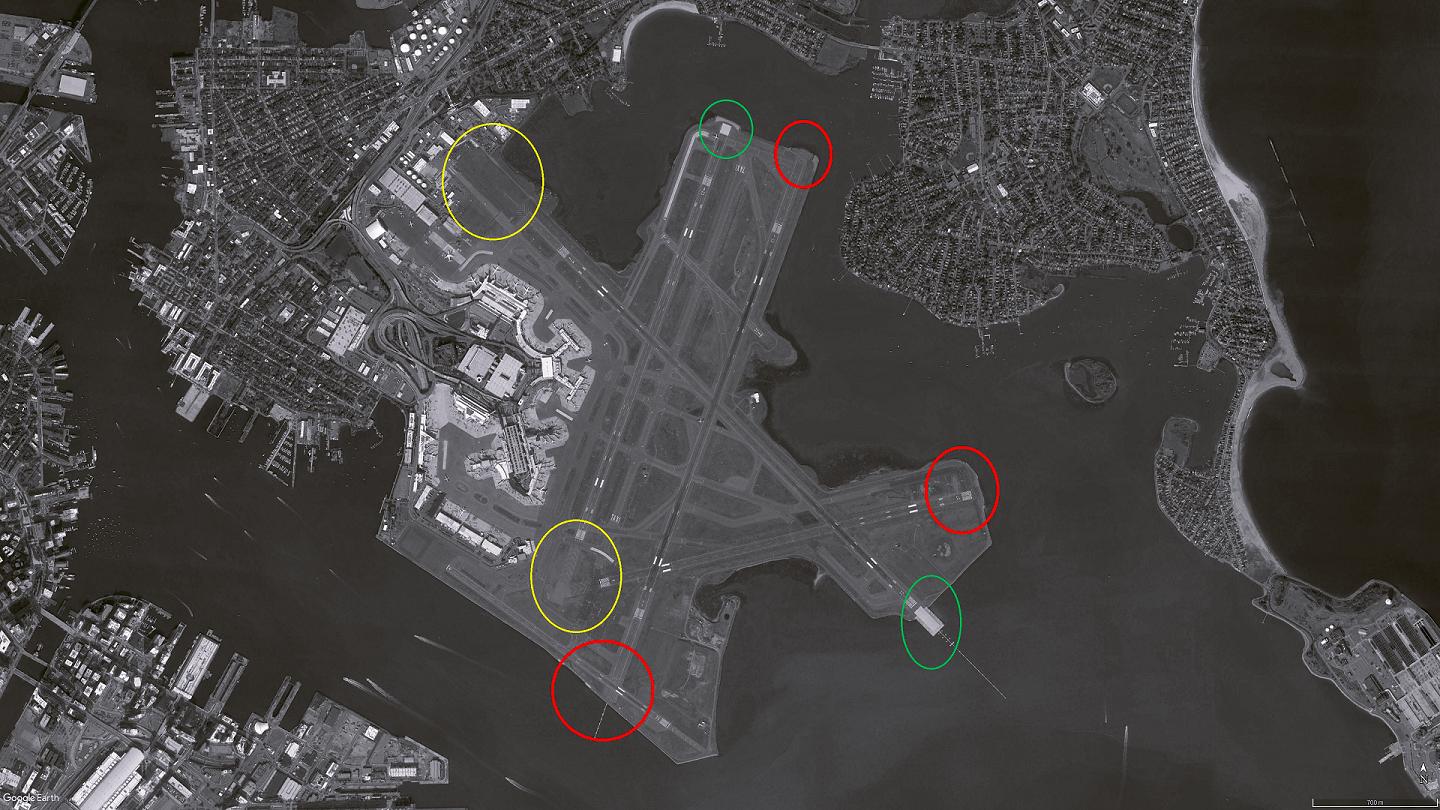 KBOS's other major runway ends (04L, 04R, 09, 15R, and 22L) drop off into the ocean just past the end of the runway. As running off the end of a runway into the ocean is generally bad for non-seaplane aircraft[citation needed], this lack of RSA space would generally (in the U.S., at least) call for the installation of EMAS beds to catch aircraft overrunning these runway ends. However, only two of the five aforementioned runway ends (04L and 15R) are actually equipped with EMAS; runways 04R, 09, and 22L each have only a short, un-EMASed blast pad separating the runway end from the dropoff into the harbour.

This is especially worrying when one considers that 04R and 22L are two of KBOS's five primary instrument runways (and 04R is one of the airport's two ILS-III runways, the other being 33L) - i.e., two of the runways that the airport preferentially uses in the very weather conditions that lend themselves to runway overruns!

Why are only two of the five water-facing runway ends at KBOS equipped with EMAS beds to keep them from discharging aircraft into the sea?

1: All references here to "runway ends" refer specifically to the departure end of the runway(s) in question, since that's the end that aircraft tend to run off of.
2: And whose RSAs cross over each other not far past the ends of their respective runways, as seen here.

In 2009 it was determined[a] BOS needs one RSA/EMAS improvement. BOS had already built two small beds on its own dime in 2005/6, but due to the determination, the one needed improvement was replaced on an extended new pier:

Boston Logan International Airport (Boston, Massachusetts) must improve one RSA. This airport is constrained by Boston Harbor and urban development. As an interim measure to improving the RSA, the airport sponsor installed a partial EMAS (at its own cost) and is studying the possibility of installing a runway deck or filling in part of Boston Harbor and then installing a full EMAS. In addition, FAA’s regional office raised the maximum feasible improvement cost to over $40 million because the runway is used by Boeing 747 aircraft and was the site of a fatal 1982 accident. The airport sponsor has started assessing the project’s environmental impact and plans to complete the project by late 2013. (oig.dot.gov; 2009)

Based on the 2019 FAA determination for this runway [9/27], the preferred RSA enhancement option for preliminary design and permitting will be construction of a 306-foot wide pile-supported deck (or pier) extending 650 feet from the existing runway threshold, with an EMAS installed on the deck. (massport.com)

Side note: Runway 09 is not used by jets for landing (source: a Massport RSA report and e.g. 2019 runway usage data), but the new bed of 2025/26 will improve the safety margins for rejected takeoffs (30% of jet departures).

a: Determination is based on a continual analysis, and when determined, there is no time frame to start the project:

Today, modifications to standards no longer apply to RSAs. The airport owner and the FAA must continually analyze a non-standard RSA with respect to operational, environmental, and technological changes and revise the determination as appropriate.

A project to improve an RSA in accordance with the determination made in Paragraph 8 may be initiated at any time. 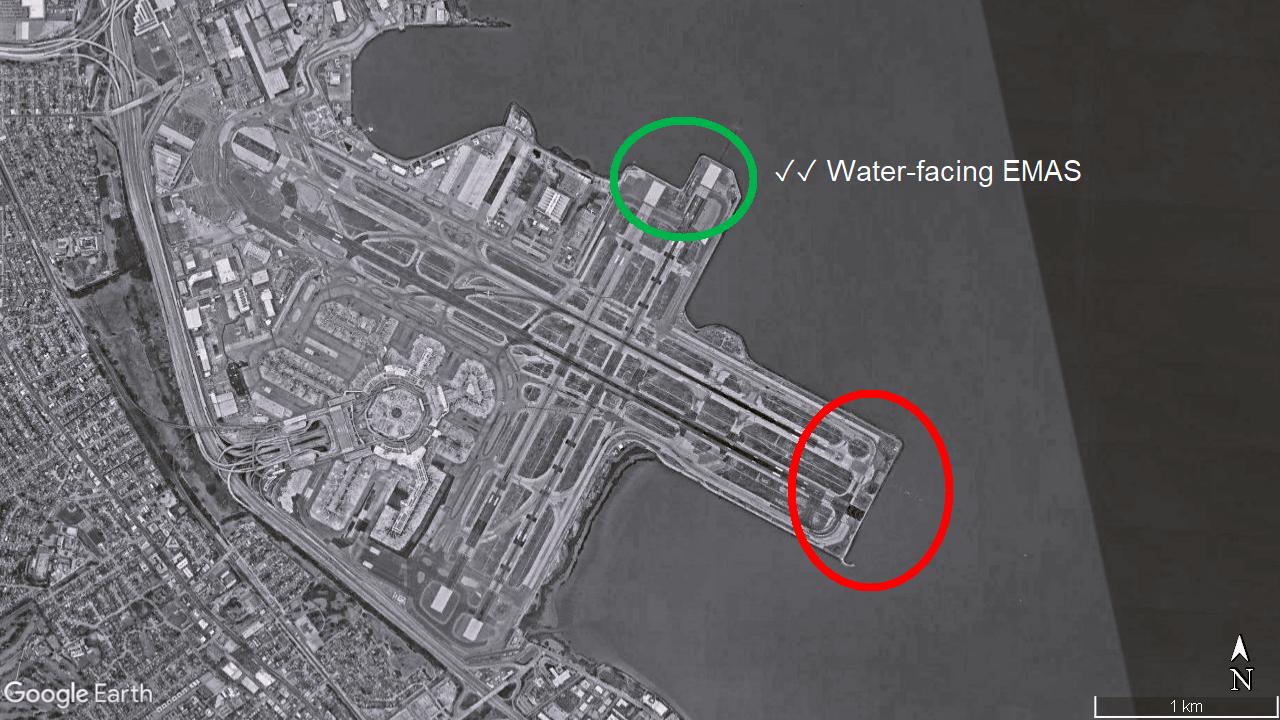 Southeast operations (operational assessment) are only less than 5% of the time:

Less than 5% of the time, aircraft follow the Southeast Plan, where planes take off to the east and land facing south. (flysfo.com)

Side note: Rejected takeoffs and undershoots are also important in RSA analysis (not just overruns). SFO's west operations (in use 95–98% of the time) utilizes the northeast water-facing direction for departures.

Not the answer you're looking for? Browse other questions tagged faa-regulations airport-design runway-overrun emas or ask your own question.

8
What effect does a direct crosswind have on takeoff performance?
18
What's this turquoise stuff covering the overlap between the blast pads of KBOS runways 04L and 09?
7
Where is KBOS runway 15R's localiser array?
6
How are pilots prepared for a go around on a simultaneous converging approach when the "converging chart" is not published?
2
Is reducing V1 a viable option for pilots when the ASDA is shorter than the ASDR?
2
Why do so few non-US runways have EMAS beds?

8
Is the phraseology in the early portion of the movie The Net realistic?
3
Why are some taxiways named with two characters?
3
Has this "straight through" airport design ever been contemplated?
23
Why do airliners park with the nose facing the terminal?
0
Why are aircraft not equipped with nose cargo doors when being converted from passenger to cargo variant?
7
Where is KBOS runway 15R's localiser array?
2
Can a formation flight operate in class B if only the lead aircraft is equipped with a transponder?