I have been attempting to measure the static thrust of my EDF with a spring balance. It is part of a group university project. The EDF specs are as follows: 90mm freewing 9 blade 1900 Kv thats rated at 4000g (https://www.rc-castle.com/index.php?...roduct_id=8798). It is being powered by a 6s lipo battery. I made a wooden stand to screw the EDF on. The stand is then attached to the metal sliders. I attached a spring balance to the wooden stand. So when the EDF turns on, the stand slides foward. The spring balance is pulled and the value can be read off it. However, I am unsure if this method is viable as the spring balance is marked incrementally in Kg. I can see this being useful if I hung masses vertically off the spring balance and wanted to measure it, but in my case, I'm trying to measure the force ''horizontally'', if that makes sense.

In summary, I was not sure if I was using the spring balance correctly. Any advice is appreciated.

On the side here are some test results: The EDF at full throttle pulled the spring up to the 3.1kg mark. The lipo was fully charged. I have attached some pictures of it: 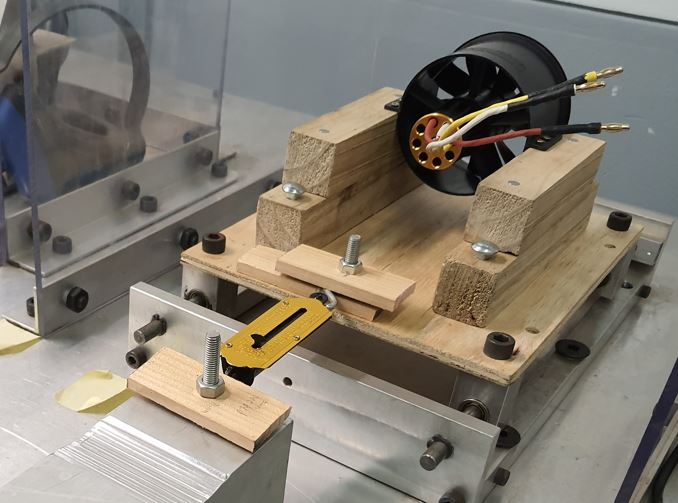 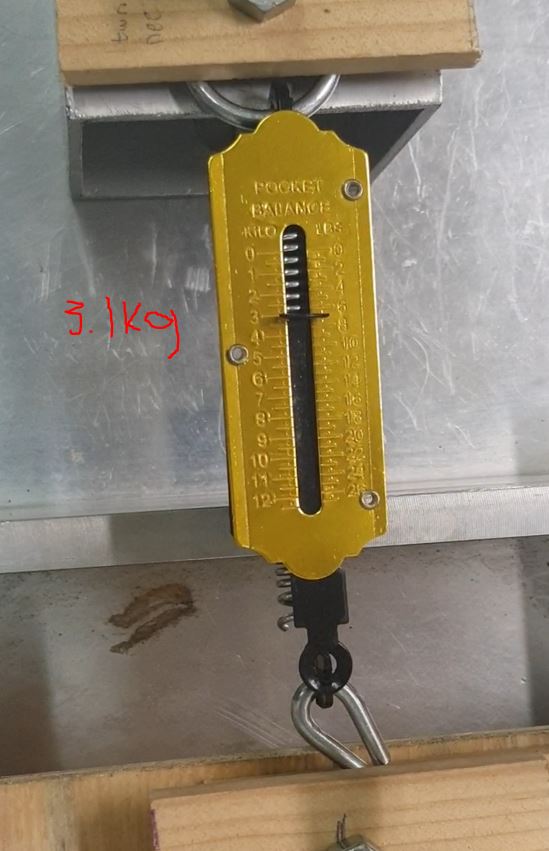 . I assume the friction between the rails is responsible for the lower thrust value.

As pointed out by @xxavier, the conversion between the indicated kilograms and the desired newtons of force is 9.80; more exactly, the local acceleration of gravity, depending on your location and planet.

When used as designed, an object is hung on the hook below the scale. The force of gravity pulls on the object and stretches the spring, moving the pointer. The amount of motion is proportional to the force applied.

It is the manufacturer of the device who decides that, if a 1 kg mass stretches the spring to a certain point, then that point should be labelled with "1 kg".

There are many problems with such a system. It is only correct for one particular value of $g$. The spring extension may change with age, abusive use, or temperature, or because of external tampering. Such devices are often marked "Not legal for trade", and balance scales, that match an unknown mass against known masses are labelled "Honest weight; no springs".

There is one problem with the setup you are using. The spring scale is designed to indicate the mass hanging from the scale. The calibration takes into account the constant load of the moving scale and hook (basically the black stuff in the picture of the scale).

If the spring scale is used horizontally, it will read low, by an amount equal to the mass of the moving scale.

Yes, basic principle of a spring is that it has a spring stiffness $C = \frac{F}{\Delta s}$. So you are measuring a force with a spring balance. The indication is in kg - but it is analogue, the reading error will be much larger than the variation in gravity along the earth's latitude.

A more accurate set-up would be with a wheatstone bridge type force transducer. There are pretty inexpensive Arduino type circuits that can drive them nowadays.

Not the answer you're looking for? Browse other questions tagged thrust propfan or ask your own question.

3
How to realistically model propeller static thrust?
1
What is the thrust balance between compressor and exhaust nozzle for a turbojet engine?
1
Why would sea level static thrust have a takeoff and a maximum continuous value?
0
Can thrust be produced only using the forward speed of a nozzle?
0
Electric ducted fan with thrust tube thrust and exit velocity calculation
0
static thrust vs. prop RPM data?