What's this turquoise stuff covering the overlap between the blast pads of KBOS runways 04L and 09?

Although runways 04L/22R and 09/27 at KBOS stop just short of intersecting, the blast pads for runways 04L and 09, which continue some distance beyond the ends of the runways proper, do intersect. The portions of said blast pads south and west of where they first touch are entirely (except for the area supporting the runway-27 localiser array) covered with some sort of turquoise substance (according to Google Maps, at least): 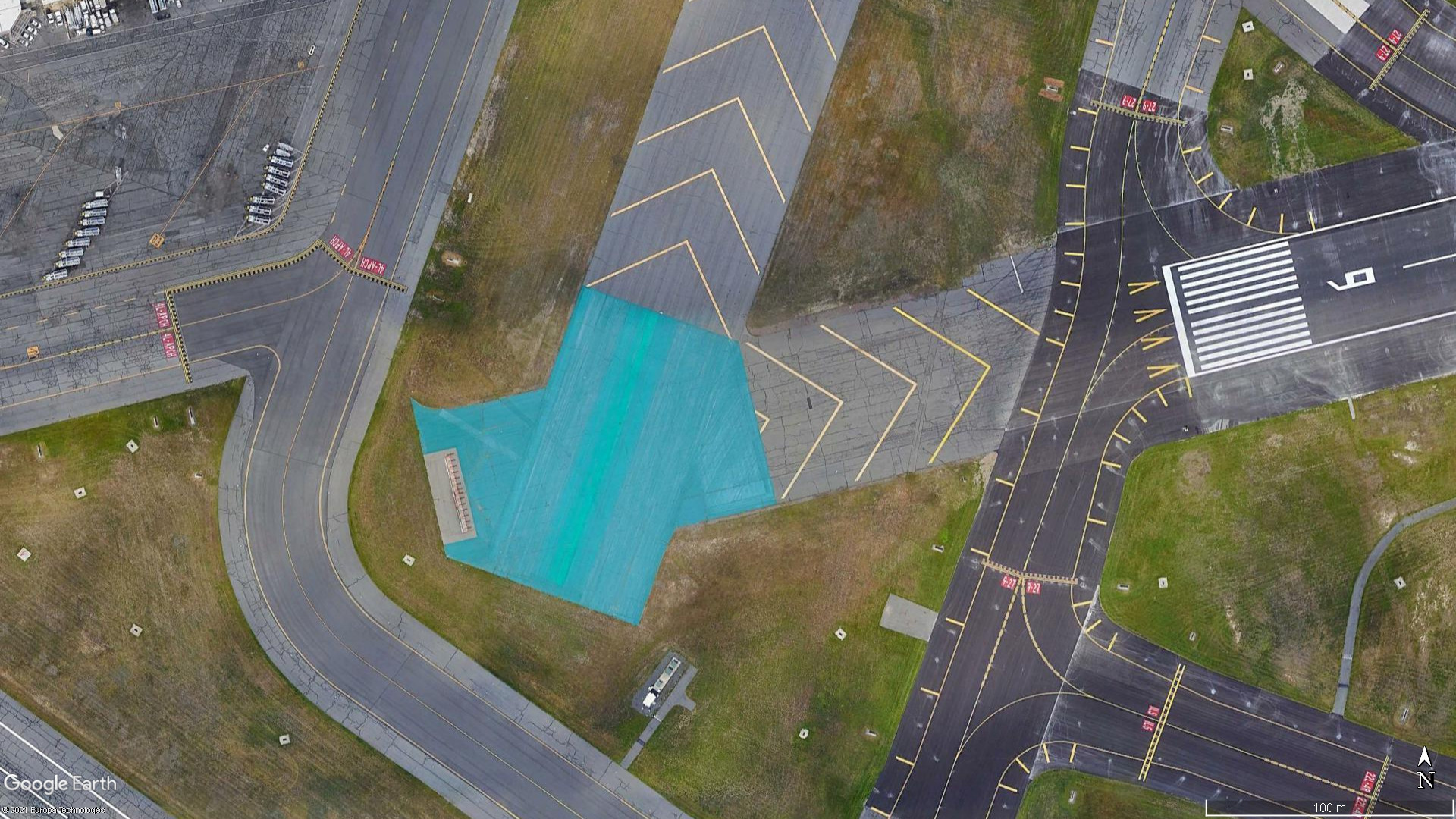 What is... whatever that is, and why is it there?

For comparison, here're those same blast pads back in 2018, when they had just the normal yellow chevrons: 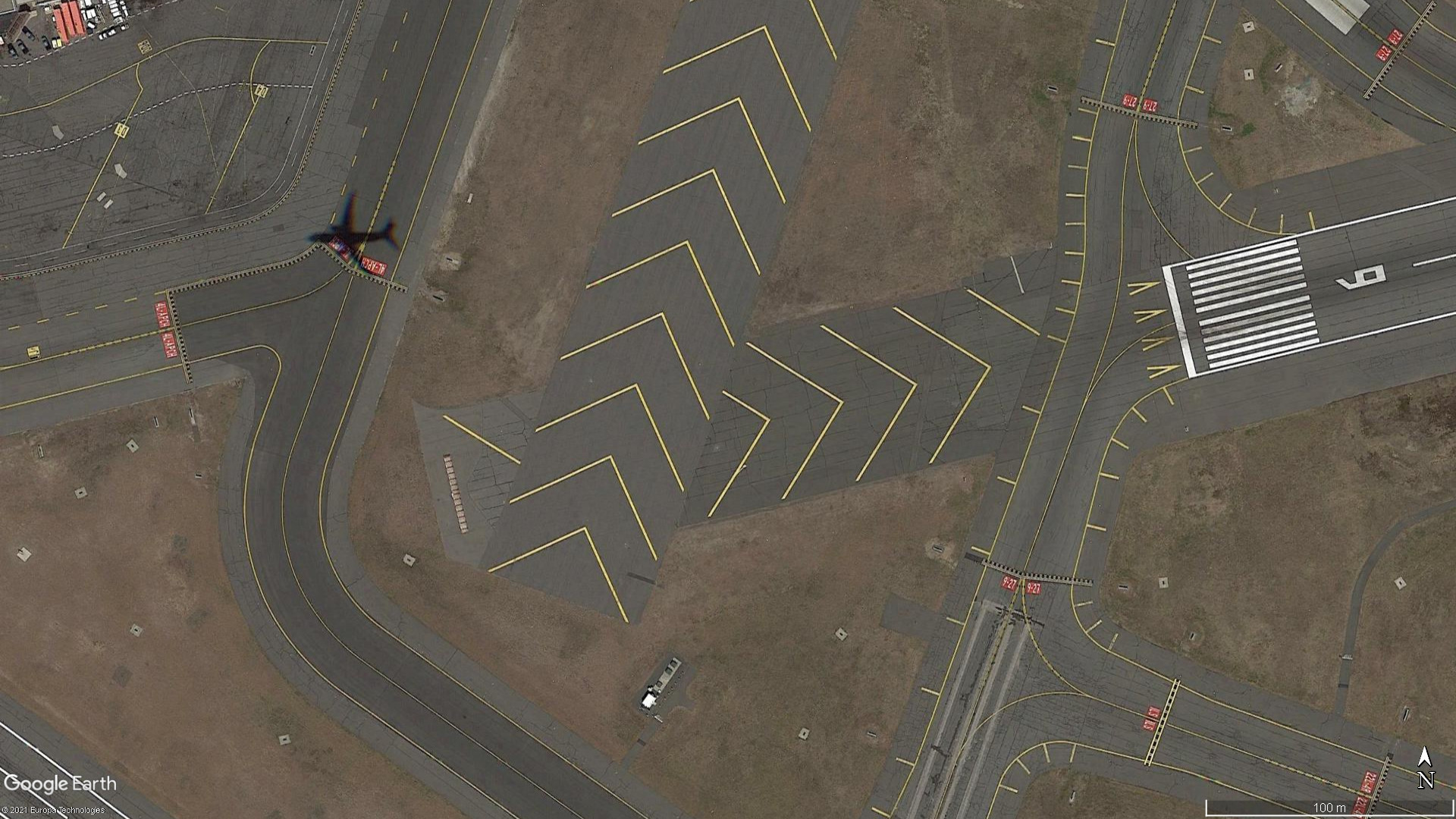 Not a dupe of this question:

In 2015, the airport owner started a project to accommodate for larger category VI aircraft (Airbus A380 and Boeing 747-8). The project consisted in Terminal E modification and runways and taxiways local pavement reinforcement.

For the project to be accepted by authorities, it had to satisfy multiple environmental criteria. The chosen solution included offsetting pavement additions by removal of an equivalent area of existing pavement. This removed portion included a part of runways 9 and 4L blast areas. Removal details:

To offset new areas of pavement, Massport proposes to remove pavement on the airfield. These areas would be planted with grass to offset grassland lost through the proposed airfield improvements.

Reinforced areas are depicted in blue below, removed areas in orange: 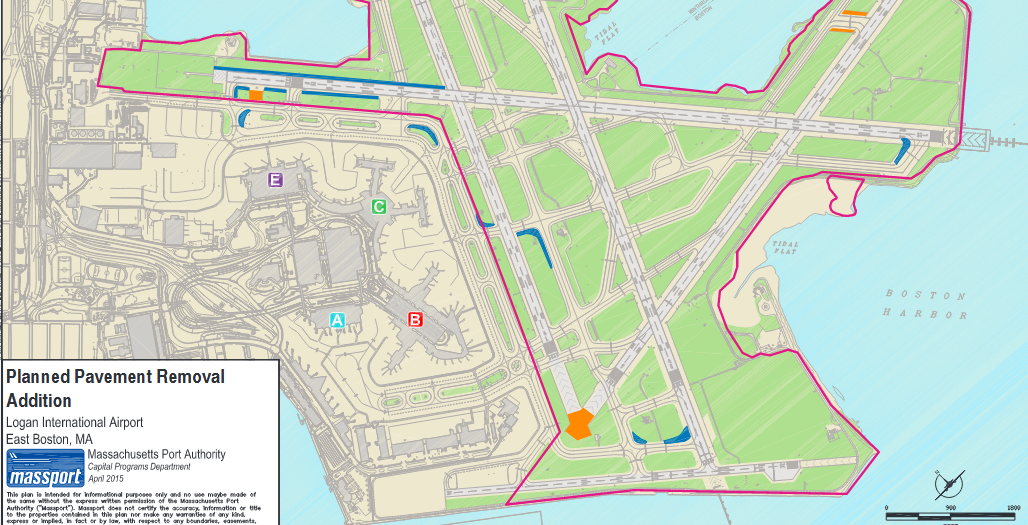 The overlapping blast area between the two runways was ultimately decommissioned, though, as visible on Google Streetview when looking carefully, the pavement wasn't removed, and there is no grass yet.

Instead the area was painted in this green-blue color, which is the recent standard used for "NO TAXI" islands. Smaller patches of this color can be found at other places on the airport.

Runway 4L and 9 thresholds are not located at the beginning of the paved strips. This is for approach path reasons. But the unused chevron-covered portions are not part of the runway safety areas (RSA) either, in particular they are not published as stopways.

When is green paint used on airports?

Green paint or artificial turf can be used for airport markings for areas not able to sustain the load of an aircraft. Such color is used for innermost borders of taxiway shoulders. The inner area may also be filled with green color (AC 150/5340-1 Standards for Airport Markings):

The continuous taxiway edge marking consists of dual, continuous lines (2) with each line being at least 6 inches (15 cm) in width [...] Although it is preferable for the inner portion of NO-TAXI islands to be unpaved, for example, grass covered, the inner area may be painted green or painted with striated yellow markings per paragraph 1.3.d.

An example at KBOS: 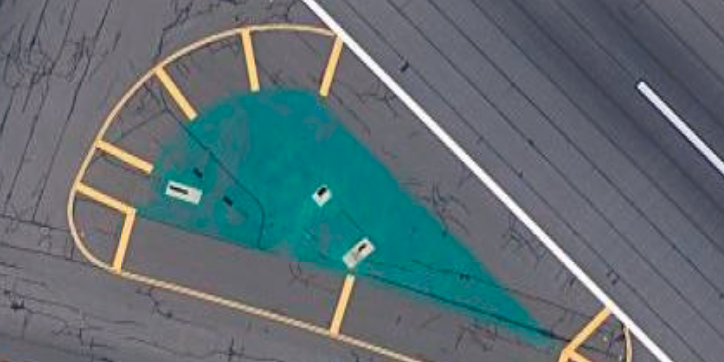 What sort of areas can extend the runway?

Runways can be extended by:

All these areas are covered with yellow chevrons, except for clearways over water, so landing aircraft are reminded they are not part of the runway. Stopways and clearways can be included in takeoff performance computations. A clearway increases TODA and a stopway increases ASDA:

What are they in the case shown?

On the airport diagram (source):

There are no size indication in the airport diagram and when looking at TODA and ASDA distances in A/FD, we see TODA and ASDA are the same than TORA:

Therefore the areas are neither stopways nor clearways. They are blast pads. From FAA regulation standpoint, a blast pad is not part of the runway safety area (RSA), and its removal doesn't change the runway declared lengths.

16
What are the areas marked in green around the taxiways?
8
Why are only two of the five water-facing runway ends at KBOS equipped with EMAS beds?