The standard operating procedures state that before every flight, a thorough pre-flight inspection should be performed. Depending on the aircraft, minute and tiny details are not even omitted.

Things do not normally and occasionally fall off from a flying airplane, the same way as different objects do not fall from a driving car, although the pre-drive inspection of a car is no where nearly as comprehensive as the pre-flight inspection. Yet, how many times we have seen a bumper, guard, muffler or rear-view mirrors falling off?

How dangerous it would be when it happens? This depends on the part which has fallen. Some parts are not noticeable until landing or next inspection and some can cause disasters.

No deaths or injuries have been reported in such incidents, but the Federal Aviation Administration is not even 100 percent certain of that.

The proper term for this incident is Things Falling Off Aircraft (TFOA). The pilot must then submit a hazardous material report within 24 hours in case the material can cause further harm.

This site has listed some TFOA incidents:

I have 1st and 2nd hand information, so I can speak reliably on this issue. In 2005, a NW DC-10 from MSP to HNL noticed abnormal heat (TIT) on #2 Engine on their final approach. The Operations Dept., where I worked at the time, told them that the thrust reverser for #2 had fallen off on the initial climb (approximately 8,000 ft.), and landed in a field adjacent to a public golf course, next to where a lead mechanic lived and he reported it to OP's, as the plane was making their final approach in HNL.

Independently, my 2 sisters were playing a round of golf at that golf course at the time, when one of them looked up in the air, pointing at a large object rapidly falling and said, "What's that?" Later, the following day, I got a good look at 6-7' round, composite metal object weighing about 300-400lbs with a lot of grass embedded into it (how does grass get embedded in the #2 thrust reverser-the engine mounted right below the rudder?) sitting on a pallet on the hangar floor. Needless to say, an object that size and weight falling from that height could REALLY do some serious damage.

But why did it happen?

DC-10's are mostly retired from service now, giving way to much more fuel-efficient airplanes, but it was not common practice to use the #2 thrust reverser, so when 'A' or 'B' checks came around, it was commonly not looked at, as there was 'theoretically' no reason to do so. The card did come up on "C" checks, but the now-deceased NWA had a policy of 'farming out' "C" checks overseas, in which case it was someone in MSP 'verifying' work was done in Honduras, Singapore, China, and elsewhere. Ignore something long enough, especially on a heavy commercial aircraft with lots of vibration and you will reap the consequences! The company immediately inspected all other DC-10's in it's fleet and found several others approaching the shear point that the original one did.

The crew was unaware it had detached in flight; it presented no compromise in the airworthiness(in a normal situation), and it wasn't until it's final approach some 8 1/2 hrs later that they noticed something peculiar, which was verified by OP's. But it could have been a catastrophe on the ground, and it speaks to the fact that there are no shortcuts to safety, no matter how cheap the ticket prices are.

Further information can be found here.

A Boeing 757's just been in the news, flight TCX1638 from London Gatwick to Hurghada Egypt.

Shortly after takeoff its emergency escape slide, as well as the unit it was housed in, fell off the jet! 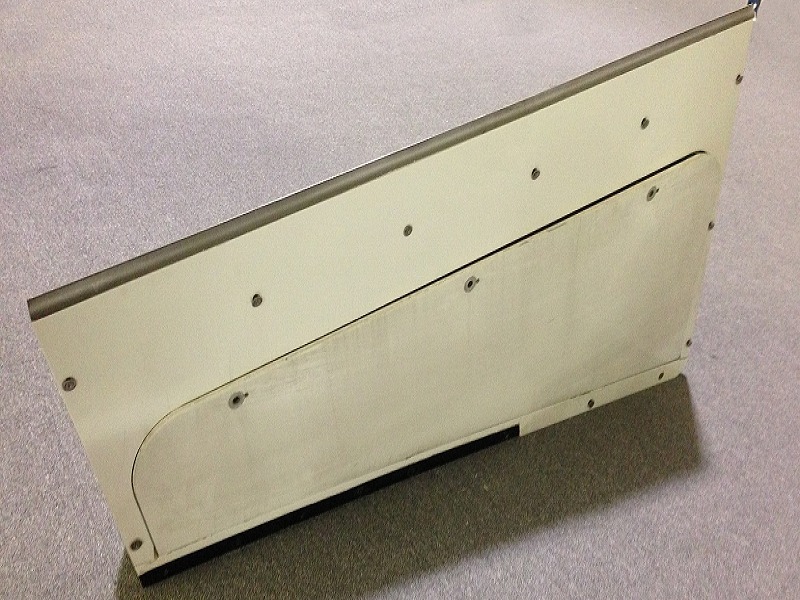 The above photo is of the 4 meter / 13 feet long chute housing that detached. Luckily it landed in a field; I can only imagine the potential for damage it could've had!

The aircraft part that police have been looking for is said to be an overwing emergency slide unit (similar to the one pictured) that is believed to house one of the evacuation chutes that deploy in an emergency after a plane has landed. The uninflated chute is believed to have been trailing from the unit as it fell to the ground.

The AAIB has launched an investigation.

Probably not, but it is possible that due to structural failure an engine, vertical stabilizer or the entire plane itself will fall down. Though often the plane will come down shortly after.

It is possible that a small leak lets the waste of the toilet seep out and freeze to the fuselage which can let go and come down in a big chunk.

One major issue that must be kept in mind is the sheer lack of probability that something falling from the sky would ever hit somebody. As a relatable example, it is estimated that over 500 meteorites actually strike the surface of the earth every year, the vast majority of which never hit anyone or anything of value. The reason is that there is a looooooot of unused space on this planet of ours, space between continents, major cities, even houses inside of said city. (Also keep in mind that even if a large object hits a house, no matter the origin, that doesn't mean that anyone in the house will be hurt. Living quarters also have a lot of empty space in them.)

I mean, keep in mind, there have been a lot of cases of entire planes falling out of the sky and for the most part nobody is hurt except (sadly, though inevitably) the people on the plane. This can even be true when it's near a populated center. Because there is a lot of empty space even near big cities.

So, yes, I would agree with the other answers that being hit in the head with a piece of junk from an aircraft would be dangerous, probably deadly. But I would contest that the chances of it actually happening are extraordinarily small. Not impossibly, but very very small.

Thus, to actually answer your question: I'd say that the vast majority of the time an object falling off of a plane isn't dangerous at all.

In both cases, large chunks of rotor discs "went missing". Had they hit someone, it would surely be fatal. Extensive searches were conducted, because they were important in the forensic analysis.

Back in propellor days, airliners would vent waste water from the lavatories on occasion. When jet aircraft began flying at very high (and very cold) altitudes, this could lead to the waste water freezing, and large chunks of ice falling at high speed, so the practice was discontinued.

Many years ago, I recall seeing a photo of a poo-sickle from an airliner that came through the roof of someone's house.

61
How dangerous is flying in a single-engine plane?
11
How are conflicts between pilot flying and pilot not-flying over aircraft control resolved?
2
When is turbulence most dangerous to an aircraft?
9
How dangerous is airborne debris?
34
How hazardous is it if an engine cowl falls off?
23
How short does a trip need to be before flying is less safe than other forms of transportation?
7
How much more dangerous is it to fly in Mexico than Europe?