With 77% less wing area than the Lazair Ultralight, how does the Blackfly meet FAA ultralight category requirement of power off stall speed of 28mph?

With 77% less wing area, how does the Opener BlackFly do a power off stall at less than 28mph (or fly with no power at 28mph)? 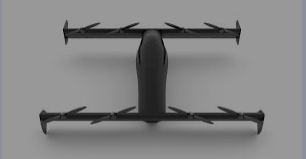 With the roughly same MTOW of 450 lbs, in order to fly with just a single prop at 28mph, the blackfly would require a wing area of 180 sq ft, according to my calculations (not sure why that's higher than the Lazair above, but at least it's close), but it does this with only about 40 sqft, or 77% less wing area.

It does this, like NASA's X-57, by using props along it's wing's leading edges to produce faster flowing air, thereby creating more lift. When flying slowly, it also uses those props to produce vertical thrust offsetting it's weight, so the wings don't have to produce lift equal to it's weight.

What about in a 28 mph power off stall, when those props are not powered?

The ability to stall under 28mph with power off, is required for it to fly in the US ultralight class.

How does it do this?

My gut feeling is that:

This machine is capable of vertical flight, and the 3 feet take off roll they talk about is just to maneuver the machine to the right attitude. The wing area (calculated) has to be around 112 sq ft, and wing loading 5lb sq ft. So clearly its clean foils wont b flying this machine at 28 mph, it simply passes through that zone in translative flight. With a 1,000 lbs of thrust from its 8 props this shouldn't be an issue even with some redundancy. For it is said to be able to fly and land safely with any 2 props out even in the same quadrant. Indeed the thrust almost equals 2x the UAW.

Since the props/rotors are fixed pitch I cant see the rather novel suggestion that it can autorotate, although its a neat idea. Perhaps I need to think about that.

Its emergency system is a ballistic chute.

I'll work out the Clmax at 28mph, and an approximate stall speed on a generous lift coefficient and get back to you. Problems, we don't know which data is right as there are 2 designs, one for US ultralight spec and one presumably for Canada. Also the data doesn't completely convince me as the wing area doesn't look right from images commonly found around the net. 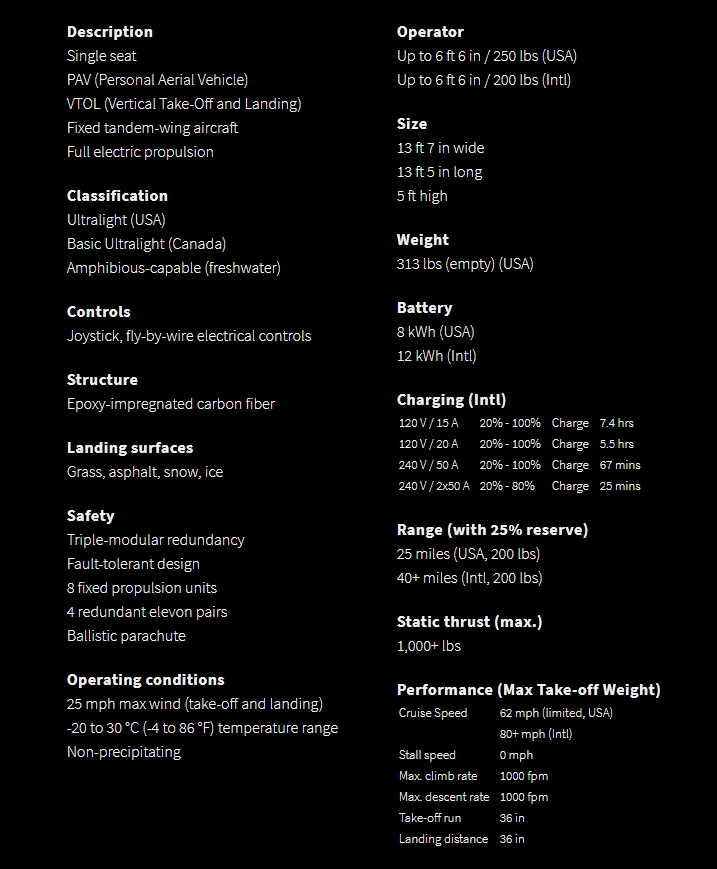 Well, since no one else is answering this question, I will take a stab at it.

My gut feeling is that the blackfly can still "fly" with power off at 28mph or lower is because it can descend slowly with its props in autorotation. See pic below.

I understand the Anotov AN-2 can also descend slowly to the ground by pulling the stick full back, with a forward motion of 14mph, and a descent of about 12mph. 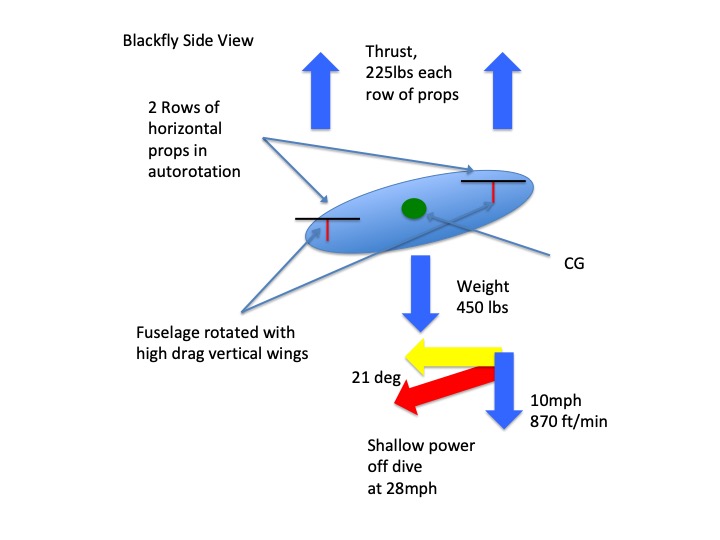 Conclusion: The thrust by the props in autorotation produced when descending at roughly a parachute descent rate of 10 mph or 870 ft/min is equal to its weight.

Therefore the blackfly could potentially "fly" under 28mph, as long as the descent rate is less than 870 ft/min, and an angle of descent of roughly 21 deg.

In actuality, this might even be slower due to fuselage drag. Also, you might want to have the props rotated at say 45 deg, not 90 deg, for a partially stalled wing so you can use your elevons for directional control.

ok now I promised to do some work on the lift coefficient, which is work that requires gross weight, a wing area, and in doing so gives us a stall speed.

Preliminaries first, this is a tandem wing aircraft, therefore there is a difference required between the front wing and the rear for safety. The front wing must stall first, so that the machine dives away forward, picks up airspeed and recovers. Conventionally, we satisfy this by increasing the lift coefficient of the front wing or canard to 2.0. Given these are unflapped wings were we would expect a coefficient of 1.4 clean. This means the aft wing or mainplane has a working coefficient of 0.8.

So lets plug it all together, the dynamic 'slug' is set at sea level value, which is the weight of a cu ft of air / the dynamic of 32.

the Cl averaged across the wings is therefore 9.8, which is quite unrealistic.

Just an observation, but it is hard not to notice that the CG seems well aft of what I think is desirable. The weight distribution must be biased to the canard so that the fuse or higher lift coefficient stall can promote the machine to fall forward and recover airspeed. Im nursing the summation that the machine is not being required to address conventional stall behaviour, which I think is dangerous. This is unless, the quite different configuration of this aircraft somewhat deceives the eye, in that to look from the wing plan view instead of the machine as it sits flat on the ground, the CG is then correctly located.

EDIT: I found some good photos that conceivably make a kind of 3 view by eye. I think I can place the CG as the CG of the pilot. Looking down on the aircraft it does seem the CG rests where I would expect it should. There is quite a difference between the side profile and the plan view. It really is a very clever design, but I enjoyed chasing the designers tail and working it out.

Not the answer you're looking for? Browse other questions tagged aerodynamics opener-blackfly or ask your own question.

8
How much horsepower to weight is required for a 1:1 thrust ratio?
2
Is NASA's X-57 using a fan, a prop, or a prop/fan and what is the difference visually/physically?

12
Why does stall speed decrease when flaps are deployed?
1
In theory which causes more parasitic drag? A large smooth wing or a small, rough exhaust port?
2
How to design a near vertical take off airplane?
1
What airfoils are used for the current generation of general aviation VTOL aircraft?
1
Does distributed propulsion create unwanted lift at cruise speeds, requiring a negative angle of attack?
0
What is the total EXTRA lift produced using an 80 deg flap and distributed propulsion?
2
Why does the NASA X-57 need a "gust control system"?
2
Are shrouds and stators needed to maximize thrust from stacked props and motors in electric aircraft like the Lilium Jet?
2
Is NASA's X-57 using a fan, a prop, or a prop/fan and what is the difference visually/physically?