Why do low pressure arrows point away from the surface if the pressure/air cannot pull/suck?

Pressure is always positive, so at the upper part of a wing pressure is positive as well, just lower than the free stream, but still PUSHes on wing surface, not PULLs.

Words like pull or suction don't exist in fluid reality, because this is not how fluids exert force on body.

Why do pressure arrows always point away from surface if pressure can't PULL?

(arrows at pictures below,are only tehnically correct if they represent direction of local net forces at airfoil surface)

The answer is surprisingly simple.

The arrows are drawn relative to 1atm. This is a convenient simplification because there is no meaningful difference between 'pulling' at the top surface against 1atm or 'not pushing' against a vacuum. And since most airplane fly in the atmosphere, this is a perfectly reasonable simplification (even though in reality, it's really the air inside the wing pushing the airfoil surface up).

Compare with the functionality of a straw. You might say you suck at a straw even though in reality you're just reducing the pushing of air inside the straw. But isn't it much more convenient to say you suck at the straw?

There is no such thing as "pressure arrow"

Pressure is a scalar quantity, i.e. a magnitude with no direction (NASA).

I believe the points you've raised deserve some attention. @Sanchises is right in that that's just a simplification, but it helps to understand what the author of the image is referring to.

Your image was adapted by Georgia State University from a book by Charles N. Eastlake where he talks about "surface pressure distribution" – even the original image caption reads, "Surface pressure." However, the adapted image says, "Pressure profile around airfoil", which is not as clear as the original caption: 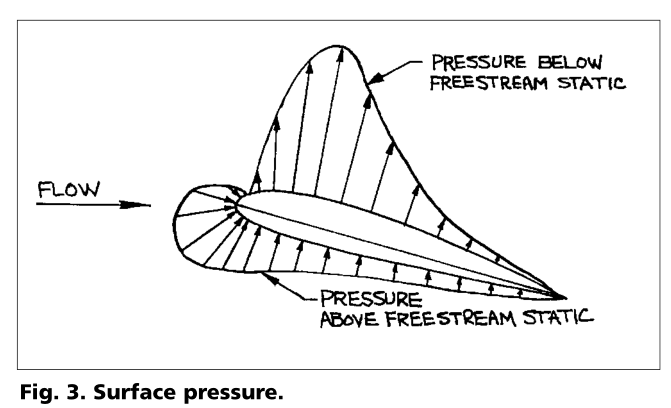 [...] it is also clear that the surface pressure distribution will vary along the chord length of the airfoil, as illustrated in Fig. 3. [emphasis added]

So, what are those arrows?

The arrows show the positive direction to/from the datum, and the arrow lengths are the magnitudes near the surface. (The datum of free-stream pressure being the envelope drawn around the airfoil.)

On the upper side the arrows point up towards that datum, meaning whatever is below that datum near the surface is a lower pressure. Similarly, on the lower side the arrows are above the datum, i.e. higher pressure. That drawing is nothing but trying to merge actual pressure distribution graphs (example below) with the shape of an airfoil as a means of explanation. 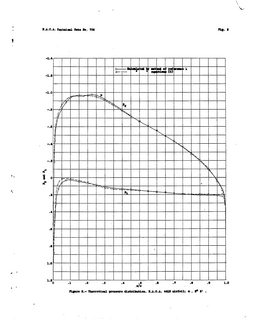 Zoom in on air molecules, and they exert their pressure everywhere, unless they're right at a surface, in that case the force (pressure times the immediate area) felt by the surface will be down and normal (perpendicular) to the surface, as illustrated by NASA:

— https://www.grc.nasa.gov/www/k-12/airplane/presar.html (I know, the force arrows above do not show the magnitude, but at least the direction is right.)

The arrows are drawn relative to the freestream static pressure, as mentioned on the diagram. (e.g. 1atm if testing at sea level).

Each vector indicates the relative air-pressure (after ambient pressure is subtracted) at that point on the surface. So we can look at relative arrows in different directions instead of small differences in the lengths of inward absolute-pressure arrows.

This subtraction always balances out because uniform air pressure won't push a stationary object in any direction, regardless of shape. (Buoyancy is negligible for wings). So these arrows do tell us which way the net air pressure differences will push / "pull" the wing.

(The arrows are not following the steepest pressure gradient or anything like that, so they're not telling you anything about the pressure field anywhere but at the wing surface. A pressure field diagram would usually have gradients shown with different colors, thanks @ymb1.)

31
Principle of aerodynamic lift: are misconceptions also taught in flight schools?
2
Are these pressure and velocity distributions calculated by CFD simulation correct?
8
Is the low air pressure on top of the wing the major contributor to lift?
3
How to read representations of pressure around an airfoil?
14
What amount of lift would be created in the fallacious "lift from equal transit time" theory?
10
Why do wall-to-wall airfoils in wind tunnels produce no (or infinitesimal) downwash?
0
Pressure Distribution Pattern around Wing
2
How does the engine produce aerodynamic lift at high angle of attack?
2
Why high air speed at flat surface don't always produce low pressure?