Is there a name for the fast decline + pull to climb pattern?

I'm a hobby photographer and I've noticed some patterns in the bird flights, so I tried to poke a bit into the aviation terminology for it. Phalacrocorax carbo does this movement similar to the attacker's 3 in the Displacement roll when declining just slightly above the water and then it pulls itself up slightly by doing this roll first, then slight pitch movement to continue the declining curve but to also gain some altitude while braking the movement and afterwards switches to gliding above the water.

Sometimes these movements are seen in action movies, so I think there might be an aviation term for it although perhaps only for the full "fighter maneuvers". Any ideas? 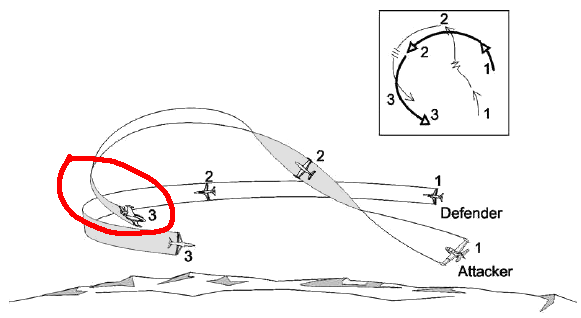 Example with the bird's flight trajectory: 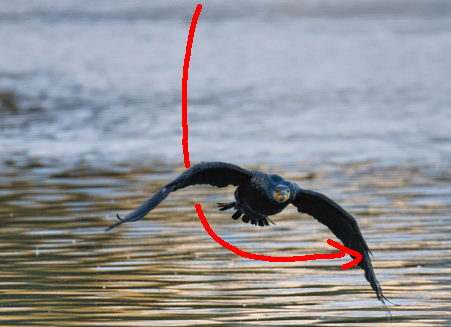 Edit: I think the wind is coming under the bird's chest or from the side and I don't think I've ever seen a bird utilizing the same pattern in windless or in very weak wind environment (in those cases it was mainly gliding without turns or climbing).

Totally didn't get the comparison with jet fighters until reading your reference for Phalacrocorax Carbo, aka great cormorant. The bottom plane is the fish it's pursuing, which makes the entire manuver worth discussing.

Cormorants hunt by diving on slower, more maneuverable prey, which have the advantage of the denser medium (water) to turn and force the bird to overshoot.

As with the upper jet fighter, the bird can increase its maneuverability by slowing down. This is done by trading speed for height (kinetic energy for potential energy). The part you are interested in is the result of the top plane rolling sideways to fall vertically, or "slip". A cormorant, or an aircraft, does this to start a dive without negatively loading its wings, which are usually much more tolerant of positive loads.

If the cormorant decides not to dive into the water, it will abort by rolling out and increasing its angle of attack to glide away.

One last trick the bird may use is to fly away low over the water to take advantage of "ground effect" (less drag for the same amount of lift) while it continues its search for dinner.

As far as the observation that they do this less on calm days, one might surmise that the ripples on the water surface will make it harder to see what is below, making for more "false positives" on its target acquisition system (eyes-brain).

Not the answer you're looking for? Browse other questions tagged aerodynamics terminology pilot-technique wind braking or ask your own question.

12
What is the correct name for this ILS Indicator?
10
Is there a name for the area for aircraft to back track near the runway threshold?
6
What is the name for a flight crew that includes extra members for a longer flight?
11
Is there a name for change in attitude with respect to time?
12
What's the difference between racetrack and holding pattern?
0
Are there FAA rules about changing an airport name from Municipal to Regional?
0
What is the name of the system that replaced stairs for disembarking aircraft?
33
Why pull up on the rollout after landing, after the nose wheel is down?
1
What is the name for a flap that increases the wing's area but not its camber?
8
Is there a conventional notation or name for the slip angle?