Why there is a descent segment during helicopter takeoff?

I am reading some regulations about vertical takeoff vehicles like a helicopter and there is some takeoff path is defined as below, and I am curious why there is a descent segment in its takeoff path? Is that a typical procedures that pilots pitch down to accelerate during takeoff? Vtoss: Takeoff Safety Speed? TDP: Takeoff Decision Point 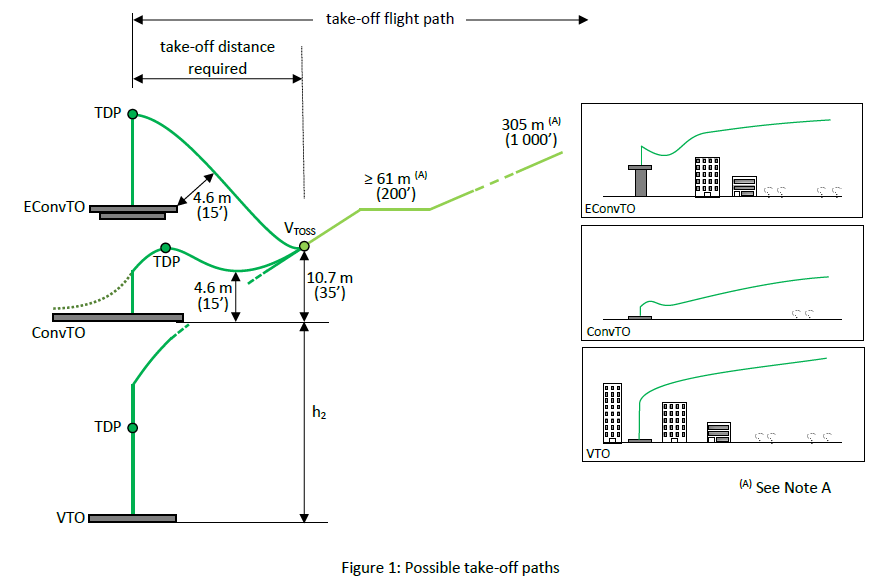 These diagrams are used to depict the possible trajectories the helicopter can fly after a single engine failure. The pilot must ensure that there is sufficient obstacle clearance for that case.

This is for helicopters with multiple (i.e 2) engines. The take-off paths shown, are considering a failure of an engine at (just after) the take-off decision point (TDP). At engine failures before the TPD, the helicopter should be able to land safely at the final approach and take-off area (FATO).

Hovering and flying at low speed requires a lot of power. In case an engine fails during hover, the helicopter may not be able to accelerate forward while maintaining a positive vertical speed (i.e. climb). The optimal speed for climbing is the take-off safety speed, VTOSS. In order to transition between the hover and the climb at VTOSS, the pilot may need to trade height for speed initially. When VTOSS is reached, the helicopter can start to climb again.

The third diagram shows a vertical take-off in a confined area. In order to do so the helicopter need sufficient excess power available, even after a single engine failure. This usually limits the maximum take-off weight for such operations.

The horizontal distance between the TDP and the point that the helicopter starts climbing at VTOSS is called the take-off distance required.

33
Why don't helicopters always takeoff from a hover out of ground-effect?

6
Why aren't there more helicopter aerobatics at airshows?
18
Why is there a plateau in helicopter H/V diagrams?
30
Why aren't there simplified fly-by-wire helicopter controls?
11
Why is there a helicopter visibility reduction restriction for this approach?
3
Do helicopter rotor blades speed up and down during the rotation?
4
What is the typcial descent rate of a helicopter?
0
Autorotation: Positive Pitch during descent phase possible?
3
What descent rate would be a "hard" landing in a Huey or similar helicopter with skids?
3
How does gross weight affect helicopter autorotation?
5
How a takeoff decision point(TDP) for vertical takeoff vehicle is defined?