Is it safe to carry bear spray on a GA plane?

I'm aware that bear sprays are normally banned from commercial flights, including in checked bags. As I'm not sure of the reason behind that, I'm in turn unsure of whether it's wise to have some with me in my Cessna as I take it to go backpack.

Additionally, why is bear spray banned from commercial flights (I mean in checked bags, it's pretty obvious why they don't want that in the cabin)? Is it the difference of pressure? Surely these things are made to withstand pressures up to 13 or 14k feet, as they could very well be taken that high when simply hiking?

The main danger in a light aircraft is that the spray accidentally discharges in the cabin. That could temporarily blind and incapacitate the pilot, which would obviously be extremely dangerous.

According to an article from the Alaska Department of Fish and Game, GA operators typically take special precautions when transporting bear spray:

You can take bear spray, but you must tell the carrier and the pilot must know. It requires special handling. Carl Ramseth is with Alaska Seaplanes, a Southeast Alaska regional service, which has planes on both floats and wheels. Bear spray is defined as a hazardous material, he said.

“You can fly with it, but it needs to be declared,” he said. “We ask passengers as they check in – people on scheduled flights as well as people going to remote locations. People don’t realize it could be a problem, so we always ask. There is paperwork filled out. We transport it in a sealed can, stored in a part of the aircraft that is not in the main cabin, so there is no risk of it going off in the cabin. Or it goes in the float compartment of a float plane.”

Some carriers use a length of heavy duty black PVC sewer pipe, four inches in diameter and threaded with caps at both ends. Several cans can be stacked and sealed in the tube for transport.

Another article on the same site says that some operators don't want to carry it at all:

“Bear spray is a big one, it’s dangerous,” said Stewart of Skagway Air. “We can do it, but we really prefer not to. Typically speaking, most carriers won’t allow it. You don’t want that going off in an aircraft.”

“We really try to have them leave it behind,” said Vanessa Thompson, with 40-mile Air.

Even if you don't have a floatplane, as long as you have some duct tape it's still possible to carry the spray outside the cabin: 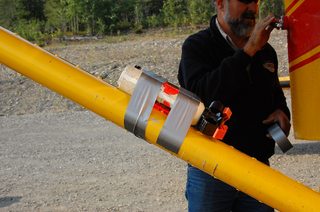 ilya_ktsn, CC BY 2.0, via Wikimedia Commons

It might look odd, but it's allowed by the FAA per JO 8400.34 - Fixed-Wing External Loads in Alaska:

Items in this group are small, lightweight, and temporarily attached with bungee cords, straps, ropes, etc. Below is a list of items that are examples that may be carried under a Standard Airworthiness Certificate. For the purpose of this order, these temporarily-attached items are not considered design changes or alterations.

Cans of animal repellent, such as bear spray or pepper spray.

Second things first (just because I can):

Bear sprays such as this Wikipedia example are banned as carry on luggage on airliners for two reasons:

TSA has ruled that:

One 4 fl. oz. (118 ml) container of mace or pepper spray is permitted in checked baggage provided it is equipped with a safety mechanism to prevent accidental discharge. Self-defense sprays containing more than 2 percent by mass of tear gas (CS or CN) are prohibited in checked baggage.

I am unaware of any rule or regulation banning bear sprays on general aviation aircraft, but unless the container was equipped with a safety device described in TSA rule, I would not take one on a plane. Not that I would be worried about the container bursting, but simply because any kind of accidental discharge could very well prove to be fatal.

If you ever have had the chance to try how it feels to be maced, you know you immediately end up in IFR without the possibility to read the gauges. The experience is blinding and very, very painful.

Not the answer you're looking for? Browse other questions tagged safety general-aviation or ask your own question.

40
How is fuel dumping safe?
19
How much oxygen do commercial airliners carry?
12
What's the right way to take a dog in a small plane?
22
Tail Wing Dented—Is it safe to fly?
13
Is it allowed and safe to carry a passenger / non-pilot in the front seat of a small general aviation airplane?
19
Is it safe to wear earplugs in flight?
5
Is it safe to use a propeller plane to fly commercially over the Tibetan Plateau?
9
Do commercial aircraft carry personal weapons?