How do I read this flight plan route?

When I create a flight plan using SimBrief, for example for London Gatwick (EGKK) to Dublin Airport (EIDW), it generates the following route:

My question is about the waypoints in between: L620 NIBDA N14 MEDOG L18. As far as I understand, a waypoint's name should consist of exactly five alphanumerical characters. Those would then only be NIBDA and MEDOG. In Microsoft Flight Simulator 2020, I can find and add those waypoints as enroute waypoints. I can however not find L620, N14 or L18.

Also in the chart created by SimBrief, there are more waypoints plotted than appear in the list, such as KENET.

Thank you for any clarification you can give. 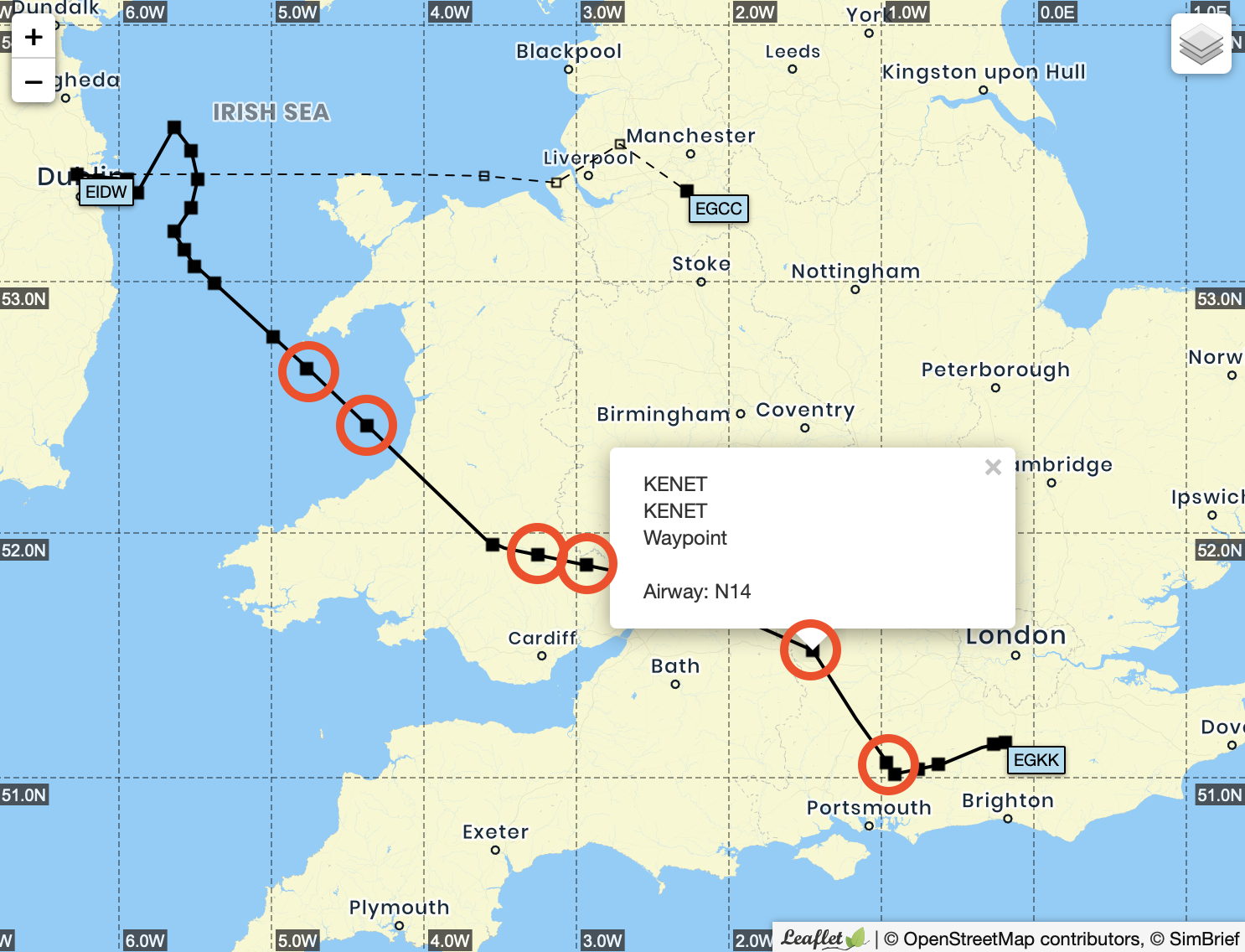 Those are airways connecting the waypoints of your route. The map you show already includes all waypoints along the route (like e.g. KENET on airway N14). When filing such a route, you are expected to follow all these waypoints and not go direct between the waypoints in the route summary (e.g. NIBDA direct to MEDOG would look very different compared to airway N14).

One can enter all waypoints one by one without including the airway information. The full document from Simbrief will contain a long table with all waypoints. However, that is quite tedious and most modern flight management systems (FMS) will allow entering a route with airways. On the G3000, it works likes this:

Adding an individual airway to a flight plan:

I do not know if the G3000 in MSFS2020 works this way, but support for the simulator is off-topic here.

Not the answer you're looking for? Browse other questions tagged instrument-flight-rules flight-planning fms routing or ask your own question.

1
How can I calculate a flightpath given a set of waypoints?
6
What information might go in the remarks section of an IFR flight plan?
5
What software generated this VFR flight plan?
5
How do planes receive their flight plan?
9
How to fill out IFR flight plan for manned helium balloon flight into class A airspace with no predetermined route or destination and less crew?
3
How do I plan TOC/TOD in an IFR flight plan that includes SIDs and STARs?
2
How to file flight plan with ZZZZ?
0
Is there a manual which describes the algorithmic procedure on which the Vertical Navigation Guidance is based?
2
For a coded departure procedure (SID), Fly-At-Altitude or At-Waypoint instruction has priority in case of conflict?