How to correct the design of an aircraft that is not speed-stable during approach?

I was just wondering if an aircraft is found to NOT be speed stable during the approach flight phase, what might a designer be able to do to stabilize the aircraft without adversely impacting its landing performance?

Using airfoils with reflex camber or the use of a combination of sweep and geometric twist should help but won't that lead to compromising of aerodynamic performance?

It sounds as if the design process has already gone through manufacture of the aeroplane and through flight testing, which is a very late stage to re-design the complete main wing geometry and structure. There are some items open to interpretation in your question, let's consider two cases: 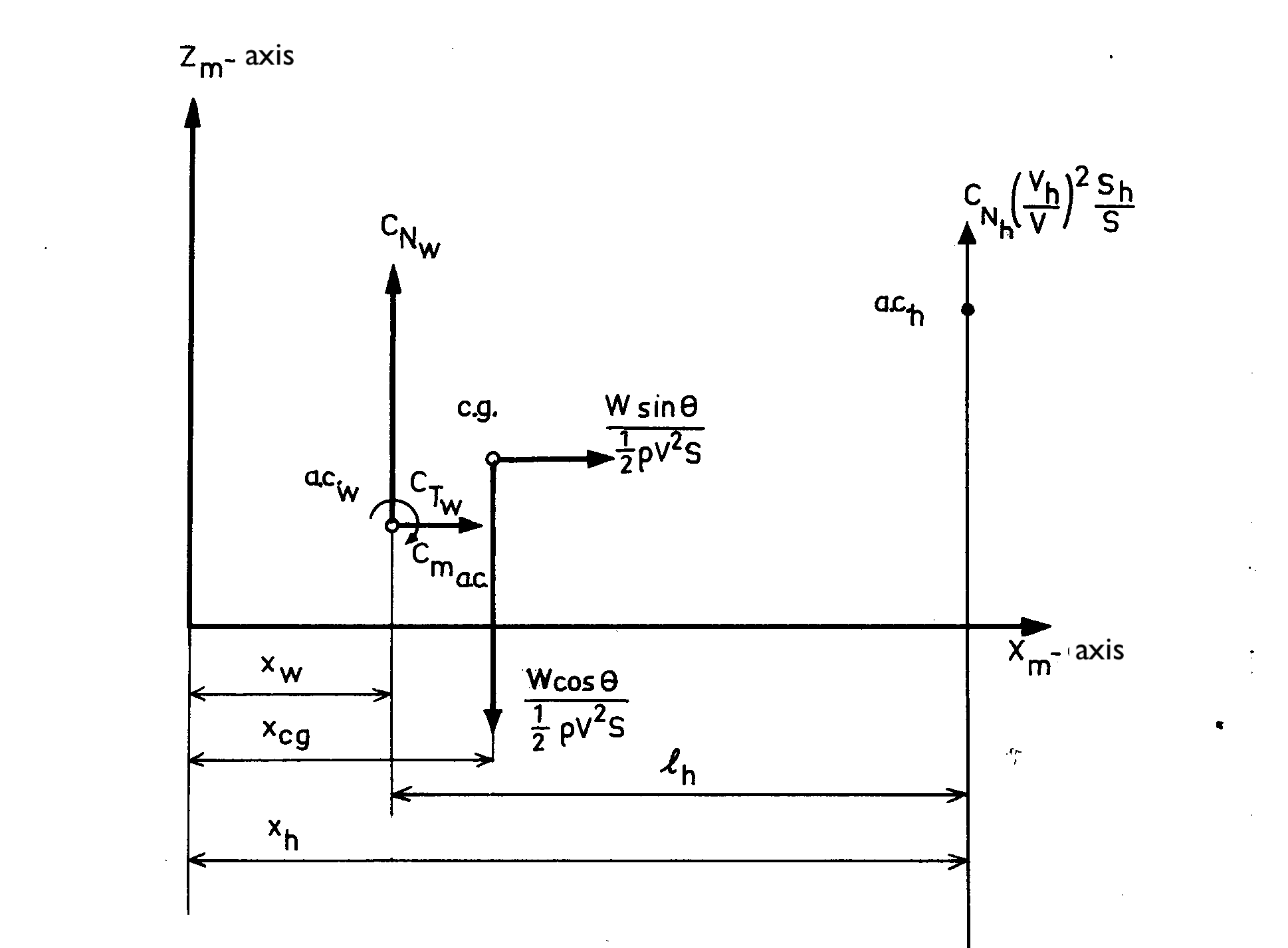 Assuming that the design in question is not a tailless one, the best approach is to work on the secondary control parameters:

After some simplifying assumptions, the moment equation in glide becomes:

So the three variables that can be adjusted are 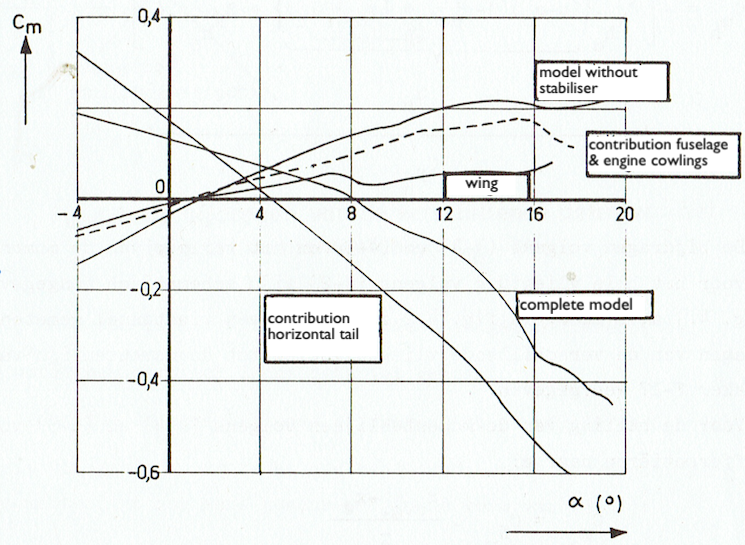 For stability, $dC_m/d\alpha$ < 0. The graph above shows the contributions to $dC_m/d\alpha$ from wind tunnel measurements on a Fokker 27 model. The (unswept) wing has a small contribution, introducing wing sweep and twist would help stability - but would be totally out of context for the F27 mission. The main contribution to stability of the model is from the horizontal tail.

2. Back end of the power curve 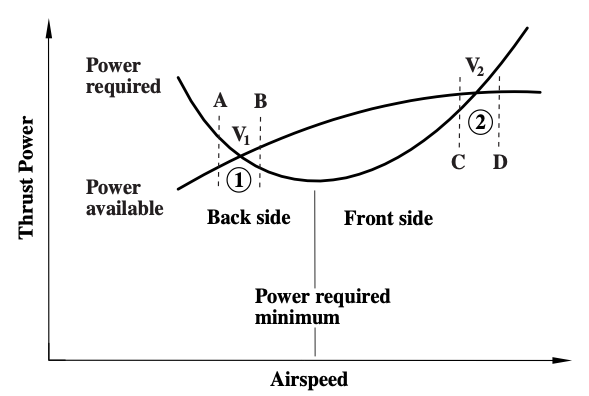 At the back end of the power curve ($V_1$ point A in above graph), there is more power required when the aircraft slows down. The airspeed does not automatically self-correct after a disturbance from a horizontal wind gust, but requires constant monitoring and additional power inputs.

The solution: more available power at low speeds, or a lower wing loading. At high wing loading the $C_L$ of the wing is high, causing the steep rise at the left side of the Power Required curve. Flaps increase $C_L$, and Fowler flaps also expand the wing area during approach.

If I understand the question correctly, the airplane will exhibit a negative stick force gradient with speed. In other words, when speed goes up the stick will move in "pull" direction when left to itself when for a stable airplane it should move in "push" direction.

From the little your question conveys I come to those conclusions:

Please note that what follows is based on those conclusions. If you misrepresented the issue, don't blame me if the remedy won't work.

Generally, speed stability can be improved by:

Depending on what is causing the loss of speed stability, those measures might not work. Your first task, therefore, is to find out what changes in approach and how that change can be neutralized. I have a suspicion that setting flaps increases flow separation at the wing and that this wake is hitting the elevator when flying at approach speeds. Here the best remedy is of course to move the stabilizer up and out of the wing wake.

No, not at all. Both will affect performance negatively and have much more impact on other parameters besides speed stability. Your issue is with the change in elevator hinge moment over speed, and this can best be addressed by tailoring the hinge moments properly.

Not speed stable on approach...

Strongly infers that adding flaps moves the CP of the wing so far back that the wing nose down torque becomes stronger than the tail nose up torque, and the stabiliator cannot compensate.

The quickest fix is to re-evaluate the forward CG limits graph with flaps extended. Moving the limit aft will increase safety margin.

The suggestion of increasing camber of the horizontal stabilizer (rather than size) seemed out for large airliners (due to increased drag at higher Mach values) until ... putting slats and flaps on the stabilator too?

Yes, that would be funny, so increasing tail volume would be a potential solution, with increasing camber a very viable solution for lower speed aircraft.

Thirdly, evaluation of changes in airflow caused by lowering flaps, remembering that the tail creates downforce, so downwash from wing will increase its AoA. There is a real danger that an (excessively small) overtaxed stabilator could actually stall before the wing, which would be disastrous. Worse yet, a computer relying on limited sensory input might respond by trying to deflect the stabilator even further.

Not the answer you're looking for? Browse other questions tagged aircraft-design approach stability or ask your own question.

12
Why does stall speed decrease when flaps are deployed?
3
How does the stick force and behaviour of aircraft relate to the CG locations?
1
What does stick fixed and stick free longitudinal stability mean in simple terms?

12
What is the correct holding altitude for the missed approach at Unalaska (PADU)?
4
How are fixes used during an approach?
10
Why are airliners not inherently "speed stable"?
6
How do pilots manage the speed during the approach?
1
How to model aircraft fuel consumption during the approach?
58
How can this aircraft be stable/maneuverable?
1
How does one tell whether a corkscrew approach is stabilized or not?
3
How to correct CG on a not leveled aircraft?
2
How is an aircraft designed to be longitudinally stable?