How do airplane balance tabs (or control tabs) change the force on the pilot's controls?

According to the PHAK ch. 6 and this description regarding Ameristar 9363, one type of tab on an elevator is supposed to "decrease the pressure the pilot needs to exert on the flight controls." This is the tab I'm asking about.

In researching this question, I found a lot of different names for these tabs, so feel free to clear that up as well. Thanks for any responses.

A tab is like an additional, miniature control surface, with its own change in lift. Since it sits near the trailing edge of a larger control surface, this lift change affects the hinge moment of the larger surface.

There are several types of tabs:

Spring tabs need careful design: Their feedback might cause flutter at specific speeds. Also, the reduction of control power from tab deflection can be as high as two thirds of the control power of the original control surface, but they could reduce the control forces down to 4% or even 2%. They were the last resort before the introduction of hydraulic controls to make large, fast airplanes controllable at high speed. Due to their high effectiveness, they require high precision in manufacturing and careful adjustment in flight testing. The Junkers Ju-88 used a combination of tabs, overhanging balance and adjustable hinge position for very light aileron forces even at 500 km/h, but each airplane required several flight hours of testing and adjustment before delivery.

how does the use of this tab differ from making the whole elevator smaller?

A size reduction will reduce control power and forces in equal measure while a well-designed tab will cost between 10% and 70% in effectivity for a force reduction of up to 98%.

PHAK chapter 6 shows a trim tab, and the linked discussion about Ameristar describes a servo tab. From this answer:

The servo tab is an aerodynamic lever, it is connected directly to the pilot flying controls.

The trim tab has a constant angle relative to the control surface. 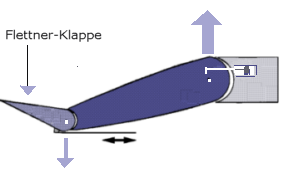 The tab you’re talking about is more commonly known as a “trim tab”. I encourage you to go through your preflight checklist where you’ll explicitly check whether the elevator trim tab is secure (for a Cessna at least).

Some other planes (eg Cirrus) don’t have such tabs. Instead, the trim is changed digitally and affects the force of servo motors that are attached to the elevator/rudder controls (the same motors that control the auto pilot). The extra force provided by these motors effectively changes the force the pilot has to input.

6
How do elevator servo and anti-servo (geared) tabs differ?
4
What classes of aircraft require hydraulic flight controls?
8
What is the working principle of trim tabs on the elevators?
1
What is the average aerodynamic load on a control surface of a commuter-sized airplane?
1
What does stick fixed and stick free longitudinal stability mean in simple terms?