What does the "MAX EMR PWR" lever do in a Quest Kodiak?

On a photo of the Quadrant of a Kodiak Quest 100 there was an additional red lever to the left of the throttle (black handle) labeled with "MAX EMR PWR". Can anyone explain what what this means and what the corresponding lever is used for? 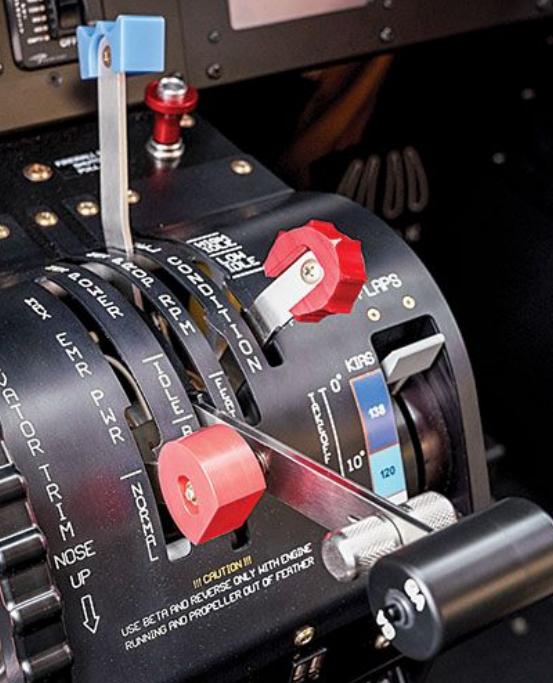 Picture by Jeff Berlin on flyingmag.com

There is already a great answer quoting from the aircraft flight manual, but I thought I would offer some additional perspective. I'm not qualified in the Kodiak, but both the T-34C and C-208 have versions of the venerable Pratt and Whitney PT6 turbine engine, and both have Emergency Power Levers like this in case the Fuel Control Unit (FCU) fails.

Older (non-FADEC) turbine engine FCUs are electro mechanical, and meter fuel according to several inputs; typically RPM, turbine temperature, demand, (per power lever position) and probably a pressure sensor somewhere. With a failure of the FCU the engine will still run, but the metering function no longer works and the RPM will roll back to idle.

This is when the Emergency Power Lever comes into play: Once engaged the EPL bypasses the FCU and gives you manual control over a valve to add fuel to the engine to increase or decrease power output. However, without the other sensor inputs you lose the governing protection of the FCU. Instead of the power lever being just one input to be considered by the FCU to change a power setting, you are now directly controlling the fuel flow going to the manifold.

The way it was explained to me was to imagine your car's carburetor or computer controlled fuel injection system failing: Instead of venturis, needle valves, jets, etc. keeping a uniform fuel mist flowing into the cylinders, you are now keeping it running down the road by carefully and slowly pouring gas from a spouted measuring cup directly into the intake manifold.

Needless to say you must be very careful using EPL to dump raw fuel into the burner like this or you can easily overtorque the engine or toast the turbine section. In Navy flight training they had us fly an approach in the simulator using the EPL and it was VERY sensitive. You really had to keep an eye on the max turbine temperature and move the EPL very gingerly to avoid exceeding limits.

From the Kodiak's flight manual:

The lever (once out of its safety stop) can be placed anywhere between normal and maximum (the word "MAX" shown) for manual fuel flow control, since an FCU failure would limit the engine to only idle fuel flow (approx. 48% Ng).

Since it's an override, once activated the power lever would be placed in idle, and the power controlled using the EMR PWR lever instead (flight manual § 3-15 ENGINE EMERGENCIES).

Consult your AFM; do not use for flight.

Not the answer you're looking for? Browse other questions tagged flight-controls feature-identification turboprop throttle quest-kodiak or ask your own question.

7
What does the condition lever in turboprops control?
3
How does the GE H75 eliminate the need for hot section inspections?
12
What is this on the starboard engine of the Dash 8?
7
What does the letter D on the underside of the wing stand for?
2
How does the throttle position affect the speed of airflow to the engine?
15
Why does the B-29 not have pilot-accessible thrust?
4
Why does the KC-46 use two sensors for MCAS when the 737 Max doesn’t?