Do pilots get an audible indication when the engines are communicating with the manufacturer whilst in flight. Do these "pings" or "hanshakes" begin on start up and are they always one hour apart?

In your question, you're mixing two things about aircraft communications:

Regardless of this confusion, the crew is not aware of the data transfer associated with engine monitoring.

This type of interrogation is realized using a "handshake": The ground station says "Are you still there?" and the SDU answers "Of course I am". If the SDU doesn't answer then some satellite resources can be released by the ground station.

Ping existence was brought to public attention after MH-370 tragedy since the time between interrogation and reply allowed the satcom provider Iridium to compute the aircraft range, like with a radar, reducing the possible crash locations to a circular arc.

This protocol is activated as soon as the aircraft SDU contacts the satellite and as long as it doesn't "log off". In practical it is active when the aircraft has no VHF communication available. Activation is under the avionics control.

Satcom SDU can be seen as a modem. It manages the satellite link and receives/transmits data using the satellite media. Pings are part of the low-level satellite logic occurring in the background, they don't generate any notification to the crew. The crew just aware of the satellite link status (there is a FMS page reserved for it).

The SDU protocol maintains the satcom link available to actual users. One of these users is the ACARS messaging system for which one satcom channel is reserved.

Engines use ACARS to exchange messages with stations on the ground, either at the airlines maintenance services, or at the manufacturer. This can happen any time. ACARS messages are routed through any radio link available, this can be a satellite link when flying over oceans or a traditional point to point radio link like VHF (VHF 3 transmitter is used). As satcom links are expensive, VHF links have a higher priority for ACARS. 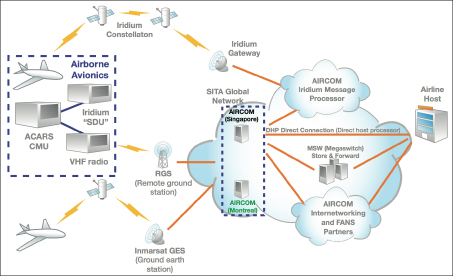 Satcom / VHF use in flight, source

Whether ACARS applications leave a track of their activity depends on the application. For example some information can be shown to the crew on the avionics display or printed on the cockpit printer with an audio signal associated.

However, the crew is not aware of ACARS messages dedicated to engine monitoring, as again there is no need for.

Not the answer you're looking for? Browse other questions tagged jet-engine cockpit-alerts acars data-link or ask your own question.

12
Why do cockpits with ACARS have printers?

36
Jet engines: are they owned by the airline or just rented?
6
Are turbine engine reconditioned after severe FOD damage caused by bird strikes?
11
Is starting a jet engine without ground support possible?
31
What would have happened if the jet engine on my aircraft had ingested caulk from the pavement?
11
Do jet engine exhausts usually glow orange?
7
What aircraft are these, and why are these engine sizes so different?
28
Why bother having different engine options on one aircraft?
10
Which commercial aircraft can perform a parallel engine start?
6
What’s the difference between an AIRSPEED LOW warning and a STALL warning?