What is the dihedral angle of the A380?

It is understood that the A380 has a sweepback angle of 33.5 degrees and a taper ratio is approximately 0.3. However, what is the dihedral angle of this aircraft?

From an interview with Frank Ogilvie, the aerodynamics director and deputy head of overall aircraft design, it's 5.6°:

Externally, the most distinctive aspect of the wing, aside from its size and 79.7m span, is the pronounced "gulling" effect and its 5.6° dihedral. "This was set by the stability requirements of the aircraft. We didn't want it too high, making it too stable, or too low, making it unstable. Plus, we needed to set it for adequate engine ground clearance, particularly in the case of the aircraft rolling around on its undercarriage. Everyone's seems to have those images on their desktop computer of that Boeing 747 landing badly at Hong Kong, scraping its engines [flickr.com] – that's what we wanted to avoid," says Ogilvie [...]

Note that in-flight the wing flexes up, removing the gull-wing effect: 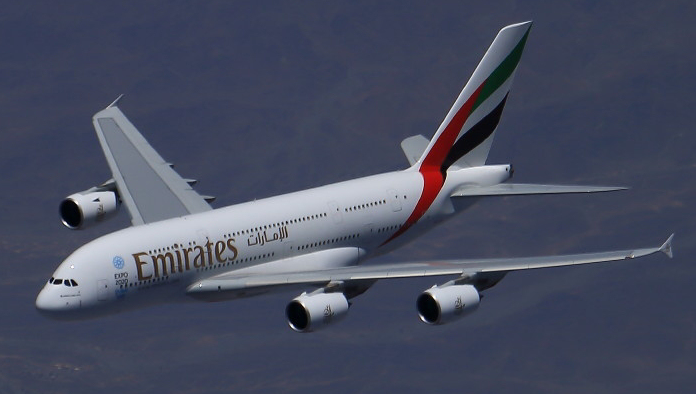 Related: How does the dihedral angle work?

Not the answer you're looking for? Browse other questions tagged aircraft-design wing airbus-a380 or ask your own question.

16
How does the dihedral angle work?
17
Why was the A380 built with a gull-wing design?

9
What is the optimal wing sweep angle for a passenger airliner?
19
Can any aircraft adjust the wing dihedral in flight?
17
Why was the A380 built with a gull-wing design?
16
How does the dihedral angle work?
16
Is the entire length of a B747 or A380 wing used as a fuel tank?
3
Does dihedral improve roll stability in gusty conditions?
8
What "designs" the dihedral angle in modern airliners?