How do I fly direct to the VOR on a VOR missed approach?

Below is the Truth or Consequences VOR-A Approach in New Mexico, USA. 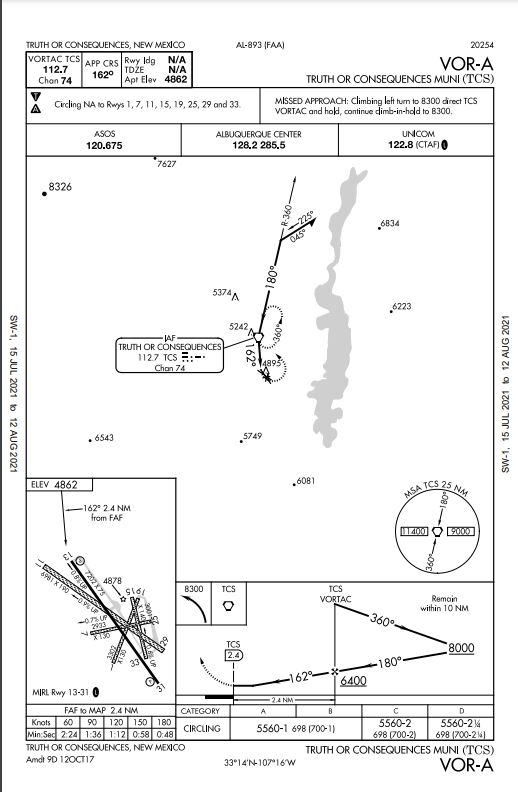 Note: There is only 2.4 nautical miles between the VOR and Missed Approach Point so trying to intercept the reverse radial in 2.4 nautical miles is a little tricky here especially with the CDI being so sensitive that close to the VOR.

My technique would be to make a climbing left turn to the northwest and dial the OBS (omni bearing selector) until the CDI (course deviation indicator) is centered and showing a course direct to the VOR. If you have an RMI (radio magnetic indicator) you could use this to go directly to the VOR as you're making your left climbing turn.

I definitely would not (after beginning the missed approach) set in (the OBS) a specific radial and try to intercept it and track inbound to the VOR. (You're too close to the VOR and the CDI is likely too sensitive for effective intercepting and tracking via a preset inbound radial)

It is a fairly short distance to travel from the missed approach point (MAP) (unless you're flying a high performance aircraft) back to the VOR so I would expect some sensitivity (fluctuations) in the OBS's CDI shortly after getting established towards the VOR.

I would anticipate and plan for a parallel entry into the missed approach holding pattern.

If I were to fly it, I would start a climbing left turn (according to the MAP described on the chart) and simultaneously start turning the OBS to keep the needle centred until I am after a +/-210 degrees turn and then centre the needle with a TO flag on the HSI/CDI and fly direct to the station on a present radial.

Not the answer you're looking for? Browse other questions tagged instrument-procedures iaps missed-approach or ask your own question.

13
When flying a circling approach, is it permitted to begin the visual circling segment prior to the final approach fix?
13
Why is a procedure turn required if you are more or less on the final approach course?
10
In what portion a non-GPS approach, can a pilot legally fly with GPS as primary navigational resource?
6
When to go missed on a non-precision approach?
4
What is the missed approach procedure when initiated below MDA/DA/DH?
3
What should a pilot do upon reaching a Missed Approach Fix when holding instructions are not given?
15
Why is the missed-approach course for the "RNAV (GNSS) - A" approach to runway 28 at ENSB shaped all funny?
5
How should one fly the entry procedure to an approach when the hold is not aligned with the outbound course?
3
Is flying direct to a navaid considered a leg with track guidance?